Aghadoe Cathedral and its
ruins near Killarney … but
was this ever a cathedral? 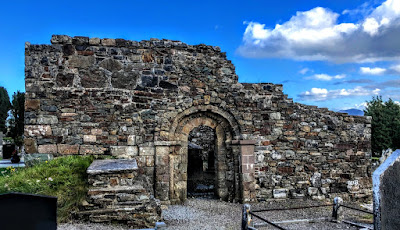 The ruins of Aghadoe Cathedral, Co Kerry, above the Lakes of Killarney … but was this ever a diocesan cathedral? (Photograph: Patrick Comerford, 2020)

Since being appointed Precentor of Limerick, Killaloe and Clonfert in early 2017, I have tried to visit all the cathedrals and former cathedrals in the diocese.

Last week, on my way back to Askeaton from Sneem and Kenmare, I stopped near Killarney, Co Kerry, to visit the ruins of Aghadoe Cathedral, below the Aghadoe Heights Hotel and about 5 km outside Killarney.

The cathedral ruins stand on a hilltop overlooking Lough Leane and the town and the Lakes of Killarney. Aghadoe may have been the site of a church as early as the seventh century, but the present remains date from a church built in the 11th and 12th centuries.

The name Aghadoe (Achadh Deo) means the ‘field of two yews.’ This may have been a pagan religious site. Although the Church of Ireland diocese in Co Kerry is called the Diocese of Ardfert and Aghadoe, historians continue to debate whether Aghadoe was ever the seat of a bishop or a cathedral, or whether there ever was a separate Diocese of Aghadoe.

The church site at Aghadoe has been associated with the fifth century missionary, Saint Abban, and legend says that Aghadoe was linked to Innisfallen and its island monastery by a causeway across Lough Leane, the largest of the Lakes of Killarney. 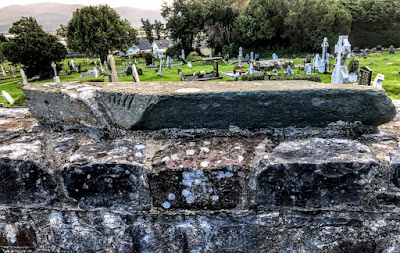 A surviving ogham stone cemented into the south wall of the chancel (Photograph: Patrick Comerford, 2020)

Two ogham stones found at Aghadoe suggest that this was an important church site from the mid-seventh century. One stone is now cemented in the south wall of the chancel and bears an inscription transcribed as ‘Brruanann.’ The inscription may have been intended as ‘Brreanann,’ a possible reference to Saint Brendan.

A second ogham stone is now missing, but its inscription was transcribed as ‘Ggvvss Mn.’

Another early Christian artefact, a ‘bullaun,’ is outside the church, at the north-west corner of the nave. It may have been a quern-stone, but was later used as a holy water receptacle and rainwater collected in the hollow of the stone was said to have healing properties. 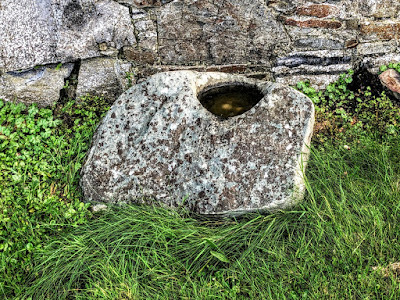 An early ‘bullaun’ at the north-west corner of the nave (Photograph: Patrick Comerford, 2020)

The Annals of Innisfallen say Saint Finian the Leper, a disciple of Saint Columba, founded a monastery at Aghadoe in the seventh century. Saint Finian was part of the traditionalist party in the debate about the date of Easter. He died ca 635, and his feast-day is on 21 October.

Maelsuthain O Carroll, one of the finest scholars at Innisfallen, died in 1010 and was buried at Aghadoe.

The Annals of Innisfallen refer to the first stone building on the site in 1027, with the building of Damh Liag Maenig, Maenach’s house of stone. Building the round tower began that year too. O Cathail, the heir to the local dynasty of Eóganacht Locha Léin, was captured in the church in 1061, taken away and murdered. 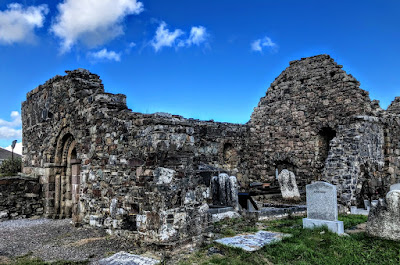 When the Synod of Ráith Breasail delineated territorial diocese in 1111, the Diocese of Ardfert became the diocese for the Kingdom of Ciarraige (Kerry), but also included the territory of the Eóganacht Locha Léin, the dynastic rulers in the Killarney and south Kerry area.

In the mid-12th century, Amhlaoibh Mór Ó Donoghue, the leader of the Ó Donoghues – the new rulers of Eóganacht Locha Léin – began building a new stone church, later called the ‘Great Church,’ in the Romanesque style and dedicated to the Holy Trinity.

The new church was completed in 1158, and Amhlaoibh Mór Ó Donoghue tried forcibly to move the see from Ardfert to Aghadoe. 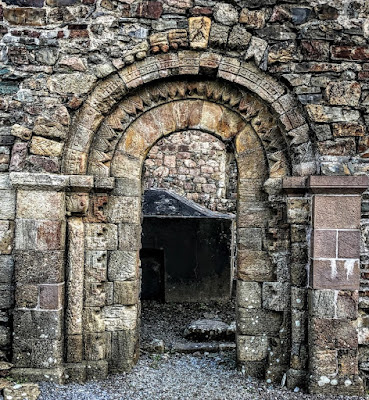 The Romanesque doorway at the west end of Aghadoe Cathedral (Photograph: Patrick Comerford, 2020)

The new church incorporated part of the old stone building in its north-west section and it forms the western section of the church that remains standing today. The western doorway is in the Romanesque style, with a three-order arch decorated with geometric patterns on the second and third order while the first is plain.

When Amhlaoibh Mór Ó Donoghue was defeated and killed by the O’Briens of Thomond, his body was carried to Aghadoe and buried in the church in 1166.

The final addition to the church in the 12th century This addition served as a chancel or choir, and was later separated from the rest of the church by a wall. 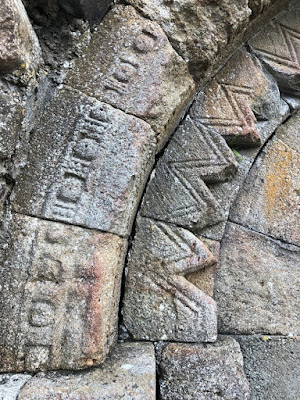 A detail of the Romanesque doorway at the west end of Aghadoe Cathedral (Photograph: Patrick Comerford, 2020)

The so-called nave is 11 metres long and 7 metres wide, and is entered through a fine, sandstone, Romanesque west doorway of three orders and with the remains of a fourth. It shows signs of rebuilding, and some of the stones have been reset incorrectly.

The arches show geometric patterns, and the shaft of the second order has interesting cut-away designs, while its arch has dog-tooth carving.

The south wall of the nave has been partly demolished, although one window survives, and there is a matching but smaller window in the north wall. 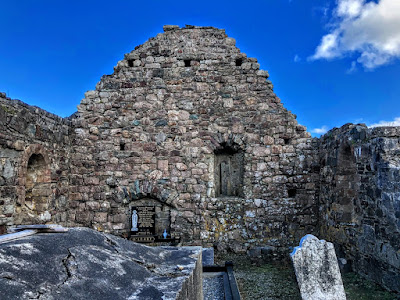 Inside the so-called nave of Aghadoe Cathedral (Photograph: Patrick Comerford, 2020)

The Gothic chancel or choir is 13.6 metres long and 7 metres wide. The east wall has two 13th century round-headed recessed lancet windows with carved head and flower stones at the interior intersection. The north wall is at full height but the south wall is only about chest high and survives in two sections. On one section rests the surviving ogham stone, on the other portion of a weathered red sandstone carving.

References in Papal letters in the 13th century support the notion that there was once a Diocese of Aghadoe. Dionysus, Archdeacon of Aghadoe, is said to have been made Bishop of Aghadoe in 1266. But after that, the clergy associated with Aghadoe are described as archdeacons.

According to the Annals of Innisfallen, Aghadoe Cathedral’s high cross fell in a strong wind in 1282.

Dermit Y’Sylleevayn or O’Sullivan, Archdeacon of Aghadoe and Vicar of Kilcrohane (Sneem) in the late 15th century, was accused of simony in in 1455, but managed to be reappointed to his positions. 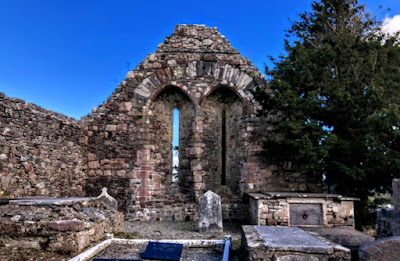 Inside the so-called chancel of Aghadoe Cathedral (Photograph: Patrick Comerford, 2020)

From the 16th century, the Church of Ireland referred to the Diocese of Ardfert and Aghadoe, although Aghadoe was only a deanery within the Diocese of Ardfert. The church is mentioned in a 1615 report, but it is excluded from a list of abbeys in the report suggesting it had become only an archdeaconry.

When Richard O’Connell, the Roman Catholic Bishop of Ardfert and Aghadoe, died ca 1650, he was buried in Aghadoe.

John Smith was Archdeacon of Aghadoe (1664-1680) and Dean of Limerick (1666-1680) until he became Bishop of Killala. His successors, Thomas Hynde or Hinde and Ezekiel Weebe were also Archdeacons of Aghadoe and Deans of Limerick. 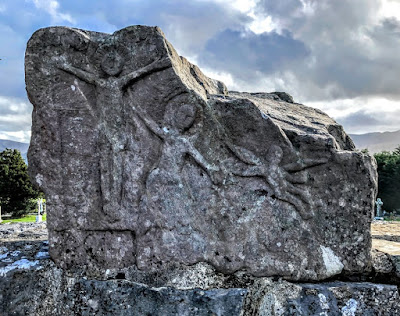 A surviving fragment of a red sandstone block with an a 17th or 18th century carving depicting the crucifixion (Photograph: Patrick Comerford, 2020)

The church at Aghadoe may have fallen into ruin in the later 17th century. Mortared onto the top of a portion of the south wall, close to the ogham stone, is a surviving fragment of red sandstone block with a 17th or 18th century carving, depicting the crucifixion, with the Virgin Mary passing a chalice to Christ on the cross and an angel. The survival of this stone suggests Aghadoe was still used as a church site in the 17th century.

Aghadoe is no longer listed as an active parish by 1740, and seems to have ceased functioning. Charles Smith, in The antient and present state of the county of Kerry, says in 1756, ‘The cathedral church of Aghadoe has been in ruins time out of mind.’

The Romanesque doorway was crudely rebuilt in the 18th or 19th century.

The cathedral at Aghadoe was in ruins by the mid-18th century (Photograph: Patrick Comerford, 2020)

Many of the later Archdeacons of Aghadoe were non-resident pluralists, and in 1788 Archdeacon Richard Leslie was deprived for non-residence, and was jailed for debt. He later became Archdeacon of Madras and died in Fort St George, Madras, in 1818.

Samuel Lewis, in his Topographical Dictionary in 1837, mentions that another church was being ‘contemplated’ to stand beside the old cathedral ruins. A new parish church for Aghadoe was consecrated on 18 May 1842.

One of the finest artefacts related to Aghadoe is a 12th century crosier found in 1848, now at the National Museum in Dublin. The crosier was carved from walrus ivory and decorated in the Urnes style, most associated with Vikings. It depicts a foliage motif that develops and curves into the shape of a monster with a man in his open jaws. The carvings are similar to those on the jambs of the Romanesque doorway of the cathedral.

Another crosier, possibly associated with Aghadoe, was found in the Lakes of Killarney in 1867 by a fisherman, who thought it was a salmon. 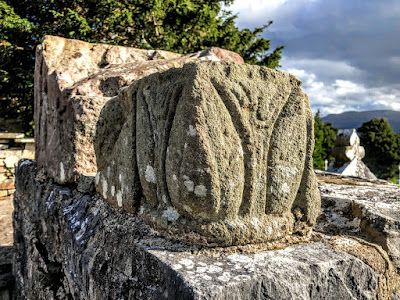 Today, Aghadoe Cathedral is a small, roofless, two-chamber building. Tradition says the nave was dedicated to Saint Finian and the chancel to the Holy Trinity. But, despite these traditions and names, it is questionable whether they ever served as a nave and a chancel of a cathedral. The dividing wall shows no traces of a chancel arch, and only a small, blocked connecting doorway on its north side.

The name of the Roman Catholic diocese was changed from Ardfert and Aghadoe to Kerry in 1952.

In the Church of Ireland, since 1972, Ardfert and Aghadoe has been part of the United Dioceses of Limerick, Ardfert, Aghadoe, Killaloe, Clonfert, Kilmacduagh and Emly.

The Victorian church in Aghadoe, which was never called a cathedral, was deconsecrated on 27 February 1992. The priest-in-charge of Killarney, the Ven Simon Lumby, has been Archdeacon of Limerick, Ardfert and Aghadoe since 2016. 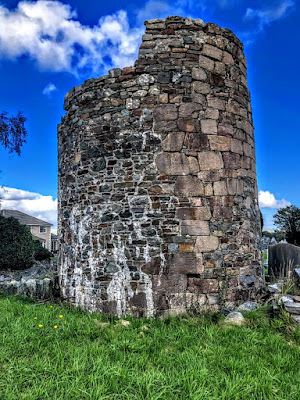 The surviving stump of the round tower at Aghadoe Cathedral (Photograph: Patrick Comerford, 2020)