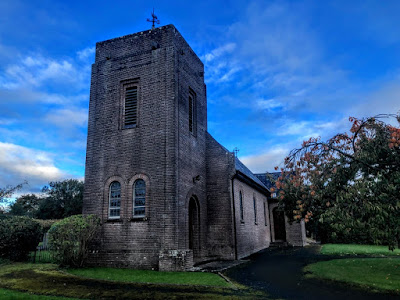 These two mediaeval sites were among the cluster of ruins that once made Kilmallock known as the ‘Baalbec of Ireland.’

While I was visiting Kilmallock last weekend, I visited the new Church of Ireland parish church. It was built hill on the edge of the town, across the road from the Deebert Hotel, and was consecrated on Saint Peter’s Day, 29 June 1938. The Rector of Kilmallock at the time was Canon Sackville Eastwood Taylor.

The church was designed by the Dublin-based architect George Frederick Hicks in Romanesque Revival style, using his characteristic red brick, and the builder was John Cleary of Charleville. 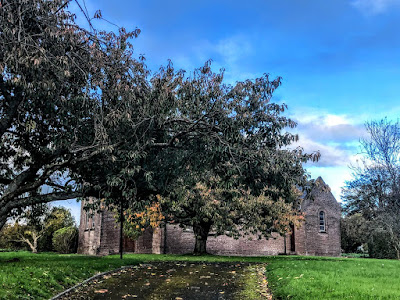 The church stands on a hill on the edge of Kilmallock, across the road from the Deebert Hotel (Photograph: Patrick Comerford, 2020)

The church is arranged on a traditional plan and is built using 20th century techniques and materials, particularly seen in the red brick exterior and the tower.

The church has a four-bay nave with gable-fronted transepts, a square-profile stepped two-stage tower at the west end and a canted chancel at the east end. The hipped and pitched slate roofs have a cast-iron finial and cast-iron rainwater goods. The hipped slate roof of the tower has a cast-iron weathervane.

There is another timber panelled door in the south transept.

The features that enhance the artistic design and quality of the church include the stained-glass windows. The East Window was moved here from Saint Munchin’s Church, Bruree, through the intervention of President Eamon de Valera, who was anxious to save it when the church in Bruree closed in 1969.

The church was designed by the Dublin-based architect George Frederick Hicks (1870-1965), who was born in Banbury, Oxfordshire, on 16 May 1870, the fourth son of Joseph Hicks, a linen draper, and his wife Mary.

Hicks was educated at Taunton School, received his architectural training at the London Architectural Association School and Finsbury Technical College, and in 1886 became an articled pupil of John William Stevens of London.

He moved to Dublin in 1890 at the age of 20 to join the office of James Rawson Carroll, where Frederick Batchelor was then the chief assistant. He later worked in the offices of William Henry Byrne and of Thomas Drew before setting up his own practice in Dublin in 1895. He worked from 5 Saint Stephen’s Green (1898) and at 28 South Frederick Street and 35a Kildare Street (1900-1903).

Hicks also designed Saint Thomas’s Church on Cathal Brugha Street, Dublin (1929-1932), built in the Lombardic Romanesque style to replace a church on Marlborough Street that was destroyed by fire in 1922. For this church, Hicks was awarded the first Triennial Gold Medal of the RIAI in 1932. 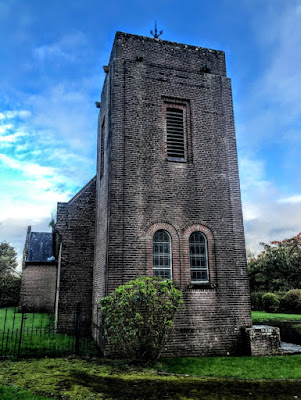 The church in Kilmallock was designed by Hicks in the Romanesque Revival style, using his characteristic red brick (Photograph: Patrick Comerford, 2020)

I find an interesting similarity between Hicks’s churches in Dublin and Kilmallock, and the Church of the Resurrection in Bucharest, designed in English redbrick by the Romanian the architect Victor Stephanescu.

Other works by Hicks include the Carnegie Library and Technical Institute in Rathmines (1905-1913), the War Memorial in All Saints’ Church, Grangegorman, 73 houses in East Wall (1925-1926), a housing scheme of 428 houses in Marino (1919-1925), and Mount Pleasant Buildings and Hollyfield Buildings in Rathmines (1930). For many years, he was architect to the Association for the Housing of the Very Poor and the Saint Barnabas Public Utility Society.

He was elected an associate member of the Royal Hibernian Academy (1930), and later a member (1944), and served as honorary treasurer (1950-1954). He exhibited frequently at the Water Colour Society of Ireland, and also exhibited at the Royal Hibernian Academy. Several of his sketches were published in the Irish Builder and four of his sketchbooks are in Library in Trinity College Dublin.

The small garden graveyard behind the church has a small number of graves, including one of Limerick’s best-known horsemen and bloodstock breeder, William Henry Leicester Stanhope (1922-2009), 11th Earl of Harrington, who died in Ballingarry, Co Limerick.

The story is told that when Lord Harrington was with the 15th/19th Hussars in Germany at the end of World War II, he arrested Admiral Karl Doenitz who had been made head of state after Hitler’s suicide, but the admiral had been reluctant to surrender to such a junior officer.

Kilmallock Parish was united with the Adare Group of Parishes in 1994, and the present rector is Canon Elizabeth (Liz) Beasley. 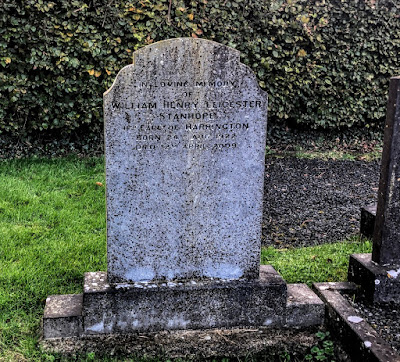 From 'A Hundred Years of Life at Grangegorman 1828 - 1928' by Canon Campbell: The woodwork is by Hicks. The enamel and metal-work by Oswald Reeves. The lettering and illuminating by G. Atkinson, R. H. A. 'The Triptych Memorial'