From Valencia to Valentia,
in a year of lockdowns,
road trips and lost plans 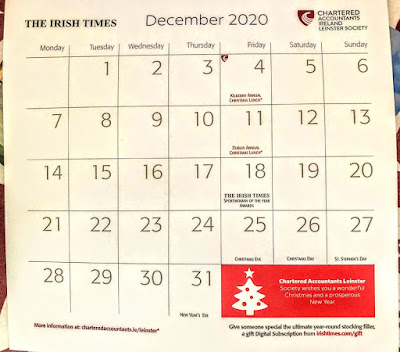 The Irish Times calendar confused the important holidays at the end of 2020 … was this a sign of the times? (Photograph: Patrick Comerford)

As I look back on the past year, I do not need to tell anyone how long or how difficult it has been. Nor do I need to recall the major events in the political, sporting, social calendars of the past year. But I should have realised that this was going to be a year like no other when calendar for 2020 produced by The Irish Times predicted that Christmas Eve this year would fall on 25 December, Christmas Day on 26 December and Saint Stephen’s Day on 27 December.

So, I started to carefully fill in a large year-planner on a wall in the meeting room in the Rectory. How wrong I was to start planning a few months in advance, never mind planning for a full year ahead.

I got to London twice, and to Valencia early in the year. I was in London in January for the launch in the House of Lords of resources to mark Holocaust Memorial Day and to mark the 75th anniversary of the end of the Holocaust and World War II in 1945.

I was in Valencia in Spain in January too, to celebrate my birthday, and I was back in London in early March for a meeting of the trustees of the Anglican mission agency USPG (United Society Partners in the Gospel).

The City of Arts and Sciences in Valencia, designed by Santiago Calatrava and Félix Candela, is one of the ‘12 Treasures of Spain’ (Photograph: Patrick Comerford, 2020)

Those visits to London, allowed two of us to spend some time off visiting Bevis Marks Synagogue, the oldest Sephardi synagogue on these islands, and to explore parts of the East End in London.

But on that second visit to London, it was obvious that all future travel plans for the year were about to be cancelled. A planned visit to Myanmar on behalf of USPG was called off, and the pandemic restrictions quickly entered every aspect of life.

Soon too, I realised I was not going to be back in Crete for Orthodox Easter, and all other travel plans were scuttled. Among the many planned trips that were cancelled included a city break in Warsaw (a Christmas present from one son), a few days in Puglia and Bari in June, summer holidays in Khalkidhiki and Thessaloniki in August and September, and the potential for a few days in Venice or Paris in November. All meetings of USPG became Zoom meetings, so never for to London again. The USPG annual conference at Swanwick in Derbyshire was cancelled too.

This is the first year in many that I have not been in Greece, Lichfield or Cambridge.

But we were not to be outdone. When the lockdown was relaxed at different times of the year, two of us took advantage of the situation, and headed off on a number of ‘road trips’ throughout the southern half of Ireland, visiting and revisiting places that reassured us that Ireland is, indeed, a beautiful island.

There were return visits to many places that were dear to me in my childhood and formative years, including Cappoquin and my grandmother’s former farm, with warm welcomes at Cappoquin House, Mount Melleray and Dromana in Villierstown; Ballinskellings and its long sandy beach on the tip of the Ring of Kerry; Valentia Island, where we stayed in the Royal Valentia Hotel; Cahir, Carrick-on-Suir and Clonmel in Co Tipperary, including the Butler house in Carrick, and the Swiss Cottage, castle and Nash-designed parish church in Cahir; Bunclody, including a first-time visit to the only synagogue in Co Wexford; and, of course, Wexford town itself. 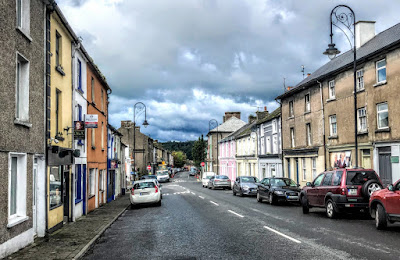 A return visit this year to the Cappoquin of my childhood (Photograph: Patrick Comerford, 2020)

I continue to provide weekly preaching and liturgical resources for clergy and readers in the Church of Ireland Diocese of Limerick and Killaloe at www.cmelimerick.blogspot.com, and I continue blog daily at www.patrickcomerford.com. I write a monthly column in the Church Review, I have contributed to a number of journals, including Search, the Irish Theological Quarterly and ABC News (Askeaton), I have written occasionally in The Irish Times, and I have written chapters for two books on the history of Saint Patrick’s College, Maynooth, and Drogheda Grammar School.

I was invited to lecture on Pugin’s architecture for the Adare History Society, on the Sephardic Jewish ancestry of John Desmond Bernal for the Friends of the Hunt Museum in Limerick, and on the clergy of Askeaton for Askeaton Civic Trust.

I marked the 20th anniversary of my ordination by Archbishop Walton Empey in Christ Church Cathedral, Dublin, in 2000. In ministry, many expected highlights were cancelled this year – including an invitation to preach at the installation of the new Dean of Killaloe, the Very Revd Rod Smith – and many more were delayed or postponed, including baptisms and weddings. But funerals can never be postponed or cancelled.

When the lockdown forced the cancellation of public celebrations of the Parish Eucharist, even on Easter Day and on Christmas Day, I continued to celebrate the Parish Eucharist on Sundays and major feast days, albeit behind the closed doors of one of the churches or the rectory.

I celebrated the Eucharist and preached once in Saint Mary’s Cathedral, Limerick, and visited the cathedral on a number of occasions. But I did not have the involvement in cathedral life I would have loved, enjoyed and expected as Precentor. And the pandemic also played havoc with plans for training days for clergy and readers in these dioceses.

On the other hand, I learned to use Zoom and became more proficient with YouTube, and both became important venues for meetings of General Synod, Diocesan Synod, clergy, USPG trustees, school boards and seminars, including a series of webinar lectures on Sephardic history organised by the Sephardi Academia programme at Bevis Marks Synagogue.

I remain a member of the General Synod of the Church of Ireland, the Commission for Christian Unity and Dialogue and the Interfaith Working Group. I am now in my last year of six as a Trustee of the Anglican mission agency USPG. I preached a recored sermon for USPG for the 75th anniversary of the atomic bombing of Nagasaki in 1945 that was used in cathedrals and churches around the world on 9 August. I am chair of the board of management of Rathkeale No 2 National School, a member of the boards of three local secondary schools, in Askeaton, Rathkeale and Dromcolliher, and a member of a number of educational and charitable trusts in Limerick.

I remain President of the Irish Campaign for Nuclear Disarmament (CND), and I spoke on 6 August at the commemorations in Merrion Square, Dublin, marking the 75th anniversary of the atmoic bombing of Hiroshima in 1945.

Although my Pulmonary Sarcoidosis has flared up a few times this year, and I continue to be conscious of some symptoms of my Vitamin B12, my good health has been enhanced this year by love, friendships, and walks on beaches, by riverbanks and in the countryside. I may have sarcoidosis, but sarcoidosis does not have me.

As the year ends, perhaps I am allowed to muse had I made that family trip to Turkey earlier this year, could I have headed this end-of-year review with a reference to ‘from Cappadocia to Cappoquin’ … had I made it back to Greece, perhaps I could have spoken of a year ‘from Rathkeale to Rethymnon’ or ‘from Askeaton and Adare to Athens and the Acropolis’? Indeed, how I wish I could I could write now about from ‘Lichfield to Limerick’, or from ‘Cambridge to Limerick’.

But the lasting legacy of this year may not be the lockdown what the shutdown of 2020 means for most of us. Perhaps the lasting legacies may be provided by Brexit and the closing years of the Trump presidency.

Before this year turned everything on its head, PPE referred to philosophy, politics and economics, which seemed to be the degree of choice of most Oxbridge team members on University Challenger, and PUP referred to the Progressive Unionist Party, once led by Hugh Smyth, David Ervine, Billy Hutchinson and Dawn Purvis.

Who ever thought a president chosen by the Republicans – the ‘party of law and order’ – would show such contempt for law, and sow chaos in the world order?

Who ever thought that next Christmas Britons may be deprived of not only Brussels sprouts at the Christmas dinner table, but also Champagne, Prosecco, Parma Ham …

Who ever thought in advance of 2020 that 20/20 vision would see them through this past year?

Who ever thought that this year would be a year when most of us would see more alcohol being poured through our fingers than through our lips?

Never in our wildest dreams did we imagine we could go up to a bank cashier with a mask on and ask for money.

I never thought the comment, ‘I wouldn’t touch him/her with a 6-ft pole’ would be heard as a caring, friendly statement.

Meanwhile, does anyone know if we can take showers now … or should we just keep washing our hands?

I have not covered a wall in the Rectory with a wall planner for 2021. As for those who get back to Mediterranean holidays next year, we may find the reality of tariffs, trade barriers and food standards may mean we are not going to be plagued by cheap food outlets offering ‘authentic English breakfasts.’

These are witty sentiments that have been shared across social media platforms and pages over the past week. But perhaps the closing words of the year should come from the US Supreme Court Justice Ruth Bader Ginsburg, who died earlier this year (18 Septmeber 2020). She was a trailblazer on behalf of gender equality, and she fought fiercely and unflinchingly to advance and defend the rights of women and minorities.

She embodied the principle of equal justice for all under the law, as well as the Jewish value of ‘tzedek, tzedek, tirdof’ – ‘justice, justice shall you pursue’  (Deuteronomy 10: 20). That saying was framed on the wall of her Supreme Court chamber, and summed up perfectly her calling as jurist and a Jew.

After a year in which racism, anti-Semitism and violence increased across the world, stoked by a US President who is refusing to accept the democratic will of his people and to leave office, it is important to keep these words in mind as we head into another year, still trembling with uncertainty about what the future holds: ‘Justice, justice shall you pursue.’

Happy New Year, wherever you are! 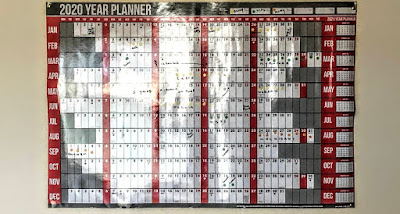 I am never again going to cover a wall with a wall planner for the year ahead (Photograph: Patrick Comerford, 2020)

You're characterisation of Trump is a case of inversion/reversal. Trump is the greatest president of my lifetime.

It is shocking how many erudite individuals such as yourself haven't bothered to find out the truth about this man and why millions and millions of Americans love and support him, and instead take their opinions about him from the likes of RTE, the Guardian, and Pat Kenny. We are living through one of the most important times in history. Please show some curiousity about who Trump really is, why he was elected, the forces he is fighting, and why we love him and his family so much.

NB: Many who love Trump cannot afford to gallivant around the world on airplanes because the forces of globalism unleashed over the last 30+ years gutted the American job market. America had the strongest economy in history (thanks to Trump's economic rebuilding programme, which he promised the American people) prior to the Covid crisis; employment levels for minorities were at a historical high.

We are interesting people - perhaps get to know us.