This month marks the 250th anniversary of the birth of Ludwig van Beethoven, probably on 16 December 1770. Because of his own ground-breaking works and his influence on others, he is probably the single most important figure in the history of music.

He single-handedly reshaped the musical language of his time and strode the transition from the 18th to the 19th century like a colossus. His shadow hung over much of the following century. ‘You can’t have any idea what it’s like always to hear such a giant marching behind you!’ as Brahms said.

But Beethoven’s influence went much further than music, affecting the wider artistic, cultural, philosophical and even political world. The philosopher Isaiah Berlin described him as ‘the great artistic figure of the 19th century, who impressed himself deeply upon the imagination of Europe.’

Beethoven’s own view of himself as a creative artist was in itself revolutionary, in seeing music and art as having the power to change the world. ‘Music is ... a higher revelation than all wisdom and philosophy.’

Karl Barth, one of the great theologians of the 20th century, wrote in 1956, ‘When the angels praise God in Heaven I am sure they play Bach. However, en famille they play Mozart, and then God the Lord is especially delighted to listen to them.’

‘And what about Beethoven?’ one wit has asked, replying: ‘Beethoven would play his own music for God, and expect God to like it, too.’

Beethoven represents the notion of artistic and personal freedom, telling us to ‘do all the good that one can; love, above all, freedom, and even for a throne, never deny the truth.’ 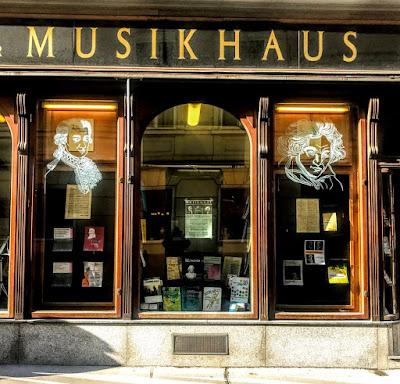 Beethoven (right) and Mozart (left) in the window of Vienna’s best-known music shop, the Musikhaus Doblinger on Dorotheergasse, opposite the Jewish Museum (Photograph: Patrick Comerford)

Beethoven was born in December 1770 in Bonn, then a sleepy outpost of the former Holy Roman Empire. We do not know the day he was born, but he was baptised on 17 December, and there is a consensus that he was probably born the previous day, 16 December. He later moved to Vienna to pursue his career in music.

Beethoven’s output was prolific, and included what he called the ‘Scottish’ airs, a collection of Irish, Scottish and Welsh folk songs. He was commissioned by a Scottish publisher, George Thompson, to arrange music for a series of folk songs. Thompson also engaged Beethoven’s one-time mentor Joseph Haydn. Although Beethoven never visited Ireland or Britain, he corresponded with Thompson from 1803 until 1820.

A complete recording of Beethoven’s Irish Songs, produced by the DIT Conservatory of Music and Drama, was released in 2014 to mark the 200th anniversary of their first publication. The late Tomás Ó Súilleabháin selected texts, mostly by Thomas Moore and Robert Burns, for the new edition of the Irish Songs.

The National Concert Hall in Dublin and many other venues have organised special concerts and events to mark this anniversary in December 2020. 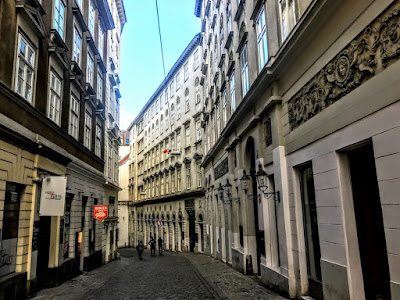 The main building of the Jewish community in Vienna, housing the Stadttempel or City Synagogue … Beethoven turned down a commission for its opening (Photograph: Patrick Comerford)

Beethoven and Schubert
at Vienna’s synagogue

The attack early in November on the Stadttempel, the only surviving pre-war synagogue in Vienna, reminded me that the Jewish community in Vienna had asked Beethoven in 1825 to compose a cantata for the dedication of the synagogue.

Beethoven was unable to accept the commission, but he carried out a preliminary study of Musik der alter Juden, perhaps with this in mind. Instead, the cantata was written by Josef Deschler (1742-1852), a choir master at the Stephansdom, Saint Stephen’s Cathedral in Vienna, and Franz Schubert wrote his setting of Psalm 92 for the choir of the synagogue.

Schubert was born in 1797 and in his short life of 31 years, he composed hundreds of songs, string quartets, sonatas, and ensemble pieces to be played in small, intimate settings. His career as a composer began when he was 14 with his first surviving vocal work. The intense ‘Hagar’s Lament’ is setting for the story in the Book of Genesis about the Hagar who bears a son Ishmael for Abraham, and is sent into exile in the wilderness.

Schubert was commissioned along with other contemporary composers by Salomon Sulzer, the hazan or cantor who was in charge of singing at Vienna’s main synagogue, the Stadttempel on Seitenstettengasse, for 45 years from 1826.

Sultzer had the reputation of having the finest baritone voice of his time and was an influential composer too. His still-familiar settings include Ein Kamocha, Yehalelu Es Shem, and Shema Yisroel. He also edited liturgical music and cared deeply about settings in the Hebrew language. 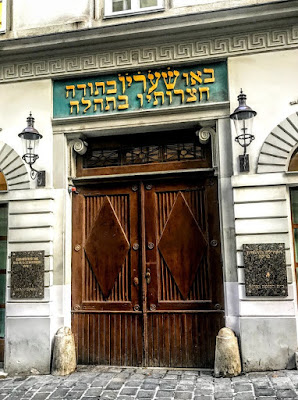 The Hebrew inscription from Psalm 100 at the entrance to the Stadttempel … Vienna’s main synagogue (Photograph: Patrick Comerford)

Sultzer was a frequent guest at Schubert’s musical evenings and commissioned Schubert’s setting of Psalm 92. This work for a four-part choir and solo baritone highlighted Sulzer’s skills. Sulzer sang Schubert’s arrangement at the consecration of the synagogue on 9 April 1826.

This setting was praised by Franz Liszt who heard it at a service at Sulzer’s synagogue before Schubert died in Vienna on 19 November 1828. The German Catholic composer Joseph Mainzer later wrote that no Viennese church of the time ever offered singing ‘as noble and lofty as that synagogue.’

The synagogue was designed in the Biedermeier style by Kornhäusel, the architect who built elegant palaces and theatres in Vienna. When it was built, it was fitted into a block of houses and hidden from plain view of the street.

The Nazis destroyed all 93 other synagogues and Jewish prayer-houses in Vienna. But because of its unusual architectural design and its location, this synagogue survived destruction 82 years ago, on Kristallnacht, 9-10 November 1938. The Stadttempel is the only synagogue in the Austrian capital to have survived World War II, and today it is the main synagogue in Vienna. 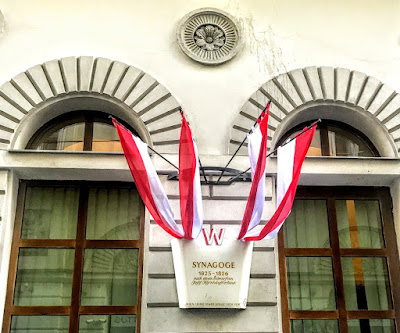 The Stadttempel or City Synagogue was attacked in November … it is the only synagogue in Vienna to survive World War II (Photograph: Patrick Comerford)

From Kilmallock to
arresting the last Fuhrer

He is known for his bloodstock achievements as a breeder, trainer, huntsman and for organising the first international three-day event at Punchestown. But, as the commemorations of the 75th anniversary of World War II come to an end, he is worth recalling as the man who said he arrested Hitler’s successor and the last Fuhrer of the Third Reich.

Bill Harrington was born in 1922 and raised in Derbyshire. His mother Margaret grew up at Mount Coote Stud in Kilmallock, where he much of his childhood. He was seven when he succeeded as the 11th earl, and 17 when World War II began. He soon joined the King’s Royal Hussars, with Lord Rathdonnell from Lisnavagh, Co Carlow, as his major. 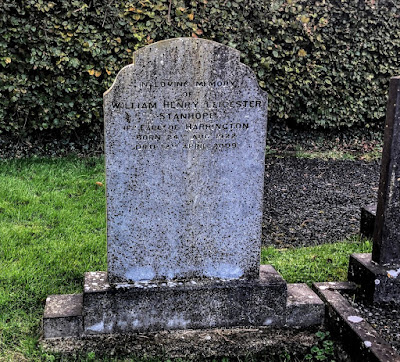 The grave in Kilmallock of the Earl of Harrington … he claimed to have arrested Hitler’s designated successor (Photograph: Patrick Comerford)

In the small churchyard behind the Church of Saint Peter and Saint Paul in Kilmallock, Co Limerick, I recently came across the grave of William Henry Leicester Stanhope (1922-2009), 11th Earl of Harrington.

By mid-May 1945, Allied forces had surrounded Flensburg, where the surviving German high command, including Grand Admiral Karl Doenitz, was based. Before Hitler died by suicide on 30 April, he had appointed Doenitz as President and Supreme Commander. A Nazi ideologue and anti-semite, he spoke constantly of what he referred to as the ‘spreading poison of Jewry.’

As Soviet troops swept across east Germany and into Berlin, Doenitz believed his crumbling regime offered a palatable option for the Allies. Instead, the allies advanced on the morning of 23 May.

As Hitler’s successor waited, the door was pushed open, and a lieutenant in the uniform of the 15/19 Hussars confronted him. Doenitz noted the man’s rank with dismay. ‘I will not answer to a Lieutenant’, he said haughtily. ‘I wish to see your Commanding Officer.’

Harrington levelled his revolver at the admiral’s chest and in colourful language told him: ‘You come with me, you bugger’.

Doenitz was escorted to the Patria, anchored in Flensburg Harbour, and was put on trial with other Nazi war criminals in Nuremberg. He spent over 11 years in prison. He was released in 1956, moved to a village near Hamburg, and died unrepentant 40 years ago, on Christmas Eve 1980.

After the war, Harrington moved to Ireland. In 1946, he divorced his first wife and in 1947 married Ann Theodora Chute, only daughter of Major Richard Arenbourg Blennerhassett Chute of Dooneen, near Patrickswell, Co Limerick.

From 1955 to 1999, he was based at Greenmount Stud, Patrickswell, the site of the present-day Limerick racecourse. There, he ran a flourishing commercial stud and point-to-point races, and kept 50 hunters for himself and his family. He also helped form the Clonshire Equestrian and Polo Centre and the Irish Olympic Horse Society.

Meanwhile, in 1964 he married his third wife, Silla Cubitt, a first cousin of Camilla, Duchess of Cornwall. They later moved to Ballingarry, Co Limerick, where he died on Easter Day 2009 at the age of 86. Over 1,000 people attended his funeral in Adare. 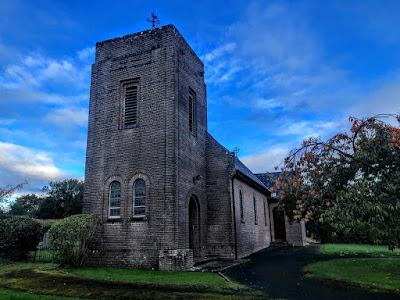