How European borders
can create division or
enrich cultural co-operation 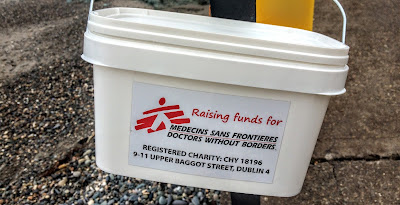 As ‘Brexit’ begins to have its impact throughout this island, many of us are realising the harsh realities it is creating. Many popular brands and items are no longer readily available on the supermarket shelves, buying online has become more difficult – it’s not all that easy for everyone to access amazon.de or amazon.fr – and when we finally translate from German or French and find what we want, deliveries are slow and there is always the fear of those ‘hidden extras’ and unexpected charges.

Fishing boats have reduced areas to fish in, and they face greater complications in getting their catches to their markets.

Both the Vatican and San Marino – two of the three smallest internationally-recognised states in the world – are completely landlocked by Italy. The Vatican State has an area of just 44 ha (109 acres), and San Marino just 61 sq km (24 sq miles).

There are other countries that are totally landlocked by EU member states: Andorra is surrounded by Spain and France; Monaco’s only land border is with France; In addition, Switzerland and Liechtenstein only have borders with each other and with EU member states.

Perhaps the most unusual land border that is legally an internal border in the EU is the land border between France and the Netherlands – not on the continental European landmass, but on the shared island of Saint Martin / Sint Maarten in the Caribbean.

Malta, the world’s tenth smallest country defined by land area, has three main inhabited islands, but no land borders. The land border dividing Cyprus is illegal by all standards of international law, and Portugal’s only land border is with Spain.

All the protocols promised that there would be no return to a hard border on this island. Now the Republic Ireland has become the only EU member state whose only land border is with a non-EU state.

I have crossed many of the internal and external borders of the EU, including the ‘Green Line’ dividing Cyprus. Even when a non-EU member state is part of the Schengen agreement, border crossings are not always smooth and seamless, as many people know when they arrive at the French ‘side’ or ‘sector’ of Geneva airport and want to hire a car to drive in Switzerland.

On the other hand, however, neither the Vatican nor San Marino is a party to the Schengen Agreement. Yet I have criss-crossed the borders between these two microstates without ever showing a passport, changing currency or facing customs … and sometimes not knowing which side of the border I was on.

Historically, the Isle of Man and the Channel Islands were never part of the UK or of the EU. Yet travel between the UK and the Republic of Ireland with those islands was always clean and simple – in pre-Covid days.

It seems, even in the first weeks of implementing ‘Brexit,’ that both Northern Ireland and the Republic of Ireland got the worst possible deal, when we compare ourselves with tiny Andorra, Liechtenstein, Monaco, San Marino and the Vatican. 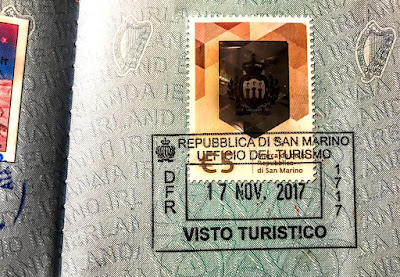 San Marino is not in the EU … but visitors do not need a visa to cross the border (Photograph: Patrick Comerford)

Gibraltar … in or out
of the European Union?

One of the many unusual land borders I have crossed is the border at La Linea between Gibraltar and Spain. Technically, Gibraltar is not a member state of the Commonwealth, so it seems to be an anomaly that it was the only British Overseas Territory that was part of the EU.

After a ten-year campaign for the right to vote in European elections, the people of Gibraltar took part in European Parliament elections from 2004 to 2019 as part of the South-West England constituency, along with Bristol, Cornwall, Devon, Dorset, Gloucestershire, Somerset and Wilshire.

Before Britain left the EU, the constituency had five MEPs, including three Brexit Party members, among them the formidable Anne Widdicombe. But there was an 84 per cent turnout in the ‘Brexit’ referendum in Gibraltar in 2016, and 96 per cent of voters opted to remain in the EU.

The Economist, long part of my essential weekly reading, reported recently how the Chief Minister of Gibraltar, Fabian Picardo, describes Gibraltar as ‘a perfect synthesis of Britishness and the Mediterranean way of life.’ There are red telephone boxes, the police wear ‘London Bobby’ style helmets, and there are English pubs and a Marks & Spencer shop.

The official language is English. But the 34,000 residents often lapse into Llanito, a kind of ‘Spanglish’, and their daily lives are intertwined with Spain.

Gibraltar exports few goods, and its economy depends on finance, online gambling and tourism. It also depends on 10,000 workers who cross the border each day from Spain, and it relies on its Spanish hinterland for space for homes and business expansion. 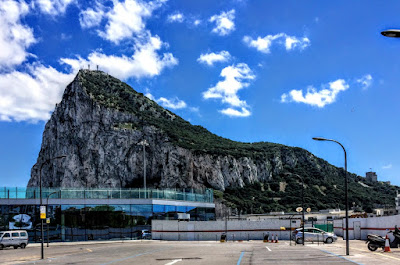 Gibraltar got some consolation for Brexit on 31 December with an agreement that softens what is now a hard border. It was a victory for common sense. This agreement aspires to freedom of travel between Gibraltar and Spain. A corollary is that Gibraltar’s airport and port will be the external border of the EU and will fall within the Schengen passport-free area. Arriving passengers, including British visitors, will have their passports checked first by Gibraltar’s police and then by Frontex, the EU’s border agency, working in conjunction with the Spanish police.

The Economist points out that many of details have still to be hammered out before a treaty between the EU and Britain, perhaps later this year. But this involves many fudges. Spain continues to claim sovereignty over Gibraltar, although it was handed over to Britain over 300 years ago in 1713.

Without an agreement, the biggest losers would be the Spanish towns in the hinterland across the border. These are some of the poorest in Spain. In Linea, unemployment is already 27 per cent and drug-traffickers are powerful.

As I write, La Linea and Gibraltar are both locked down due to Covid-19, and there is little traffic across the border. But when the pandemic ends, both sides have much to gain, and Fabian Picardo says he looks forward to a ‘Bay of Prosperity.’ 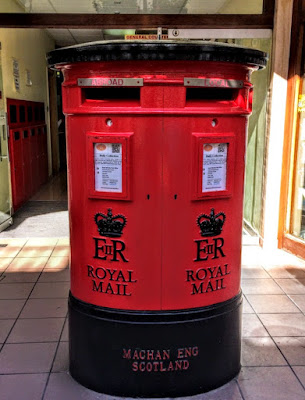 A red post box in Gibraltar … ‘a perfect synthesis of Britishness and the Mediterranean way of life’ (Photograph: Patrick Comerford)

Among the many interesting but curious borders I have crossed between two EU member states is the old Cold War border that slices through the town that is known on one side in Italian as Gorizia and on the other side, in Slovenia, as Nova Gorica.

Like Berlin, this is one city is one despite straddling an old Cold War frontier, but unlike Berlin it remains in two separate states. Nicosia in Cyprus is also a divided capital, but this is in contravention of UN resolutions and international law.

In recent weeks it was announced the city has been chosen as the European Capital of Culture for 2025, alongside the German city of Chemnitz, known in East Germany during the Cold War era as Karl-Marx-Stadt.

Gorizia and Nova Gorica applied as one, single urban area as the candidate for 2025 in a unique gesture of cross-border co-operation. Together, these two cities will be the first capital of a region that stretches across two countries.

The mayors say this this gives the two cities the opportunity to become an important point in the EU as ‘the hub of the cross-border region.’

Crossing points in Gorizia have been a matter of curiosity since the end of the Cold War (Photograph: Patrick Comerford)

After the collapse of Yugoslavia, the frontier dividing Gorizia remained in place until Slovenia became part of the Schengen Agreement on 21 December 2007.

Today, the border between Italy and Slovenia is almost invisible, an artificial line that slices through Gorizia and Nova Gorica. The most celebrated border crossing is at Europa Square, an open pedestrian square in front of the Transalpina railway station. But there are other border crossings between Gorizia and Nova Gorica, for the border is a straight line that ignores the natural contours and bends in the streets and buildings, still seen in the remains of a fence that once ran across streets and even divided gardens.

Perhaps the most creative and inviting borders are the ones that invite us to step out of our safe space to enrich our cultural experiences and to appreciate diversity and pluralism in our own lives. And, conversely, the worst borders must be those I set up in my own mind, to exclude others and to put fences around my own inner, and all too comfortable prejudices. 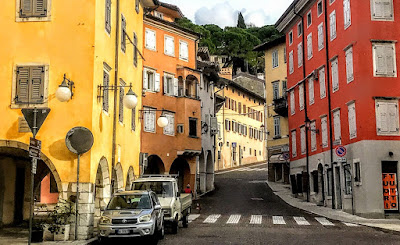 Gorizia has been chosen as one city as the European Capital of Culture for 2025 (Photograph: Patrick Comerford)

This feature was first published in February 2021 in the ‘Church Review’, the Dublin and Glendalough diocesan magazine (pp 14-15)