Ali Comerford returns to Kilkenny
and releases her debut single 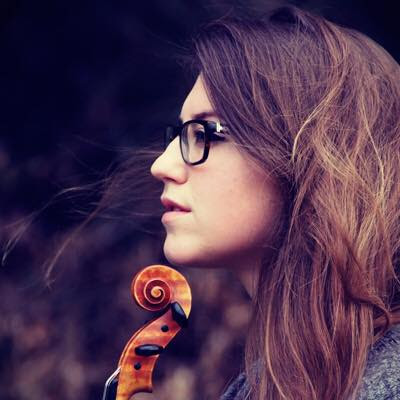 Ali Comerford, Kilkenny-based singer and multi-instrumentalist … ‘He Knows’ is her debut single

‘He Knows’ is the debut single from the Kilkenny-based singer and multi-instrumentalist Ali Comerford, released earlier this month (4 March 2021). Ali was born and raised in Kilkenny, and she started playing and studying classical music at the age of 4.

After years as a first call freelance session musician for various string ensembles and chamber orchestras in New York and touring the world, Ali returned home to her native Jenkinstown in Co Kilkenny in January 2020.

Faced with the biggest stretch of free time in 14 years, she used her artistry to process and bring closure to the various ups and downs of life and has recorded her debut album of original folk-based but classical influenced songs.

During the coronavirus lockdown, she threw herself into song-writing. ‘At the very beginning of the first lockdown I set myself a target that I had to complete a song every week and it was a great way to keep my mind off things. Gradually I’ve been able to build a routine that has kept me sane although there still are good days and bad days.’

‘He Knows’ has been described by reviewers as a stunning listening experience, filled with intriguing folk tones and pop appeal. One reviewer said, ‘Comerford’s compelling musicianship and deft lyrical ability is impressive and a joy to listen to.’

‘He Knows’ is described as a piece of rich musicianship as Ali Comerford creates a delicate tune wrapped in intricate instrumentation and sweet tones. ‘Her lulling vocals caress a dreamy melody, while a blossoming string arrangement provides a pristine and innocent atmosphere. As the instrumentation grows in volume, the song becomes more vulnerable and expressive.’

Talking about the song, Ali says, ‘He knows is a lilting song about leaving an unfulfilling relationship, the ups and downs of seeking support elsewhere and the resignation that the truth will always come out.’

Oh but there must be a way out,
Of this maize that I’ve been working on,
But I’ve built the walls so high with doubt,
Do I keep on building ’til he’s gone.

She counts Carole King, Emily King, PJ Morton, Yebba, and Jai Paul among her musical inspirations, but adds, ‘there are really too many to count. It’s incredible and very inspiring to see what people are creating.’

Other influences and favourites include ‘Jealous Guy’ by Donny Hathaway, the Bonnie Raitt version of ‘Angel from Montgomery’ written by John Prine, and ‘Need Your Love So Bad’ by Fleetwood Mac, which she says is ‘the perfect lullaby’.

She is active on Instagram, Facebook and twitter, and her music is available on all major platforms, including Spotify and Apple Music. A live gig she played at the Ballykeeffe Amphitheatre in Kilkenny for the launch of He Knows can be found on YouTube.

Her new single He Knows, Don’t Wait and Come Home are tracks on her debut album due for release this summer.