The Cathedral in Rethymnon was rebuilt after World War II and is modelled on the Church of Evangelistria on Tinos (Photograph: Patrick Comerford)

This is Monday in Holy Week (29 March 2021), the last week in Lent. This week I am offering photographs from seven churches that I think of as places of pilgrimage and spiritual refreshment (I have reflected earlier this Lent on the place of the chapel of Saint John’s Hospital, Lichfield, and of Lichfield Cathedral, in my spiritual life).

My photographs this morning (29 March 2021) are from the Cathedral of the Presentation in Rethymnon. I first visited Rethymnon in the 1980s, and immediately felt at home. I have returned almost every year ever since, not just for holidays but for time for personal prayer and reflection.

Although Rethymnon is centuries old as a city, with classical, Byzantine, Venetian and Ottoman buildings around every corner, I know of no surviving remains of Rethymnon’s mediaeval cathedral, which was destroyed in a raid by Algerian corsairs in 1571. The Cathedral of the Presentation of the Virgin in the Temple is a relatively new building. It occupies most of Mitropolis Square and was first built in 1834 on the site of an earlier church. It was rebuilt after World War II and is modelled on the Church of Evangelistria on Tinos. Inside the Cathedral of Rethymnon on a recent Good Friday (Photograph: Patrick Comerford)

Let us pray that during this Holy Week we might journey toward Easter with a hope that will enliven our communities with the presence of Christ. 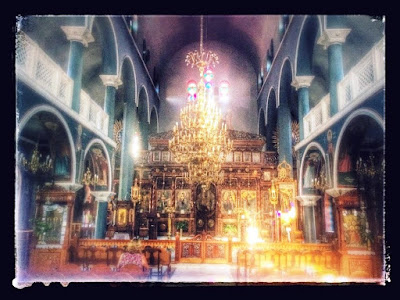 Inside the Greek Orthodox Cathedral in the centre of Rethymnon (Photograph: Patrick Comerford)