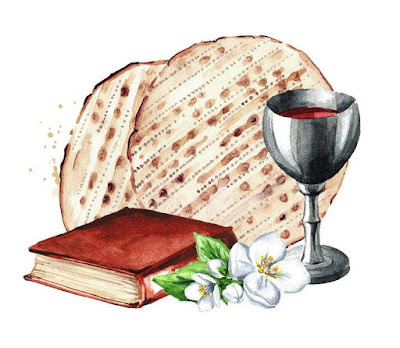 The Passover (Pesach) holiday theme of Redemption reaches a crescendo during its final two days – from sunset this evening (Friday 2 April 2021) until nightfall on Sunday (4 April).

There is a beautiful Jewish custom of concluding this holiday with a festive meal dedicated to future Redemption. This rich, multi-faceted custom is known as ‘Moshiach’s Meal’ or the ‘Messiah’s Meal.’ It was encouraged by the Lubavitcher Rebbe, the late Rabbi Menachem Schneerson (1902-1994), who spoke at length each year about the messianic spark inside each person and how each individual, by tapping into their unlimited potential to do but one more act of goodness, holds the potential for global transformation.

Meanwhile, the Church of England has been deeply embarrassed this week and in response to strong criticism from priests and rabbis alike has withdrawn prayers and a video designed for people to observe Maundy Thursday at home last night because of perceived associations with a Passover Seder.

The Church’s National Inter-Religious Affairs Adviser, the Rev Dr Richard Sudworth, apologised yesterday (1 April 2021), saying: ‘The brief prayers and actions are not, and were not, intended to be a Christianised seder, as the text pointed out.’

A posting on the Church of England website last month offered prayers for use at home during Holy Week. The prayers for the evening of Maundy Thursday were to be said with a household gathered round a table that would include ‘a bowl of warm water with a towel, freshly baked ‘flat’ bread, herbs, including rosemary, and honey.’

The document tells people to say the Shema Jewish prayer in Hebrew and to have a dinner at which the youngest person present asks, ‘Why is this night different from all other nights?’ The head of the household replies: ‘Once we were slaves in the land of Egypt, but the Lord rescued us on this holy night. That is why this night is special, and different from all other nights.’

In another section, one reader asks, ‘Why on this night do we eat only unleavened bread?’ and another replies, ‘We eat unleavened bread because there was no time that night to let it rise.’

An accord signed jointly by the Chief Rabbi and the Archbishop of Canterbury in 2019 advised there should be no allusions in Christian worship to a Jewish Seder – or even a ‘Christianised Seder.’

Dr Sudworth said: ‘The prayers and readings were offered to help families be mindful of the events of the original Last Supper, and the framing context of the feast of the Passover to Jesus and the disciples, connecting with our Christian Bible texts for this day.

‘However, we do not wish to encourage an impression that was not intended by the resource and apologise for any offence caused. As we prepare for Easter, we would like to offer our greetings to everyone in the Jewish community as they celebrate Passover.’

The Church also promoted a Facebook event on Wednesday alongside a screenshot from the video that appeared to show a family taking part in a Christian-style Seder. But priests and rabbis claimed the booklet and video for ‘appropriating liturgy’ from Judaism.

The Revd Nick Nawrockyi shared a screenshot of the event on Twitter with a comment: ‘Eek! The @churchofengland offering for Maundy Thursday online looks worryingly like a “Christian Seder”.’

‘A) it is wrong (and harmful) to steal Jewish ritual. We have our own.

‘B) they may say this isn’t a Christian Seder, but the duck test (if it walks and quacks like a duck ...) applies, and that sure as heck isn’t what a normal Anglican Eucharist looks like.’

The Revd Malcolm French asked: ‘So, @churchofengland, @JustinWelby, what exactly are you going to do about this? Cosplaying someone else’s rituals is not appropriate, especially since we’ve been repeatedly asked not to do this.’

Rabbi Debbie Young-Somers, who teaches World Religions at Leo Baeck College, has worked at the Council of Christians and Jews and has co-ordinated Interfaith activities at West London Synagogue. She wrote: ‘I am very heartened by the many Christians on my time line asking people not to appropriate #passover #seder for Easter. Thank you ...’

In a feature in the Church Times some years ago (27 March 2015), Professor Aaron Rosen, a Jewish theologian and the Revd Dr Carolyn Rosen, now an Episcopal priest, noted the increasing trend among some Christians to celebrate a ‘Christian seder’ and pointed out many aspects that ‘might justifiably make Jews a little nervous.’

Although for some Christians the primary attraction of the seder lies in exploring what the Last Supper of Jesus was really like, they pointed out how this is historically anachronistic ‘since the Haggadah only developed many centuries after the death of Jesus. There is profound paschal imagery in the eucharist, to be sure, but Jesus certainly did not celebrate a seder in a way we would recognise today.’

They also pointed to a second, even more worrying, issue. When Jews and Judaism are valued principally for the light they shed on Christian history and theology, the door is flung wide open to the spectre of supersessionism.

‘Jews today are unwilling to be seen as the librarians of Christendom,’ they said.

As for the Moshiach’s Meal, this tradition, celebrated by many Jews to mark the waning hours of Passover, was instituted by the Baal Shem Tov, the founder of the Chassidic movement, as a feast celebrating the Divine revelation yet to come.

Moshiach’s Meal is held following Minchah, the afternoon service, on the eighth day of Passover, with an open door, allowing anyone who wished to partake. The celebration customarily extends past nightfall, ushering out Passover amid song, words of Torah and inspiration.

During the time of the Baal Shem Tov, the main ingredient of Moshiach’s Seudah was matzah. Rabbi Shalom Dov Ber, the fifth Lubavitcher Rebbe, added four cups of wine to the matzah of Moshiach’s Meal in 1906, mirroring the Seder held the week before.

For my Friday evening reflections this evening, I am reading the verses from the Book of Isaiah that are read as the haftorah on the last day of Passover (Isaiah 10: 32 to 12: 6). This reading includes the prophecy of a leader for whom ‘the spirit of the Lord shall rest on him, the spirit of wisdom and understanding, the spirit of counsel and might, the spirit of knowledge and the fear of the Lord’ (Isaiah 11: 2).

He shall bring peace to humanity, ‘with righteousness he shall judge the poor, and decide with equity for the meek of the earth’ (Isaiah 11: 4). This new peace and godly understanding will extend to all of God’s creatures: ‘The wolf shall live with a lamb, the leopard shall lie down with the kid, the calf and the lion and the fatling together, and a little child shall lead them’ (Isaiah 11: 6).