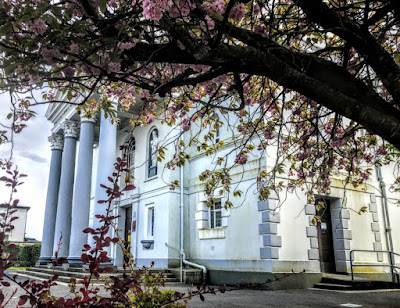 After visiting the church and former barracks in Ahane at the end of last week, and walking through the Clare Glens on the borders of Co Limerick and Co Tipperary, two of us returned to Askeaton through Newport, Co Tipperary, where we visited Church of the Most Holy Redeemer.

Newport, with a population of about 1,800, is about 4 km from the Clare Glens, about 8 km from Birdhill and 16 km from Limerick, and the town is nestled in the foothills of the Silvermine Mountains.

The Newport River is a tributary of the Mulcair (or Mulkear) River and flows through the middle of the town where it is joined by the Cully River.

The town dates back to the arrival of the Anglo-Normans in the late 12th and early 13th century, and has been known as Newport since the mid-17th century. 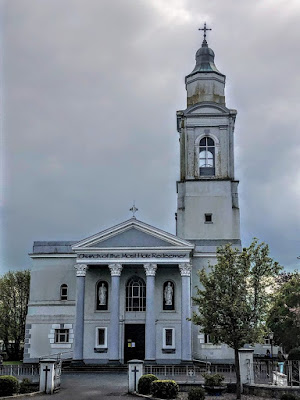 The Church of the Most Holy Redeemer in Newport was designed by the Dublin architect Ralph Henry Byrne (Photograph: Patrick Comerford, 2021)

The Roman Catholic parish in Newport is part of the parish of Newport, Birdhill and Toor in the Diocese of Cashel and Emly, and the most prominent building in the town is the Church of the Most Holy Redeemer, standing on a prominent corner on Church Street, and opposite the site of Saint John’s Church, the former Church of Ireland parish church in Newport.

The Church of the Most Holy Redeemer was built in 1933-1934 to replace an earlier church, also known as Saint John’s Church, that was built ca 1796 but had fallen into ruin.

The history of the parish dates from at least the 13th century, when the parishes of Kilnarath, Kilvellane (now Ballymackeogh) and Kilcomenty were counted in the Diocese of Cashel, and Kilnarath is mentioned in the Papal tax list in 1291.

By the beginning of the 18th century, Newport had several ‘Mass Houses’ and Father Daniel O’Connell was the parish priest for almost half a century, from 1704 to 1751. He was succeeded in turn by Father William Kennedy who was Parish Priest of Kilnarath and Kilvellane, without Birdhill, in 1751-1795, and Father Thomas Cooke, in 1795-1804. 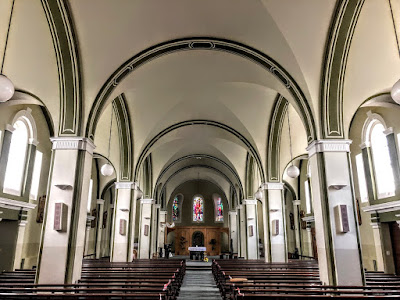 Inside the Church of the Most Holy Redeemer in Newport (Photograph: Patrick Comerford, 2021)

Dr Cooke wanted to replace the ‘Mass Houses’ in Newport with one parish church in the town, but he was refused a site by the local landlord, Sir Edward Waller. Undismayed, the priest took possession of a hollow swamp and dried-up riverbed in what was regarded as ‘no-man’s land,’ and completed his church within two years. This early stone-built Saint John’s Church was cruciform in shape, with a slate and oak roof.

Dr Cooke was succeeded as parish priest by Father Laurence Bourke (1804-1813), an early graduate of Maynooth, and by Father Thomas Morrissey (1813-1821), who died in an epidemic that swept the area.

Father James Healy (1821-1844) added pews and three galleries to Saint John’s Church. The aisle was lengthened and a new belfry was added by Father James Howard (1888-1928). The Sisters of Mercy arrived in Newport in 1900, and the nuns attended Mass early each morning. 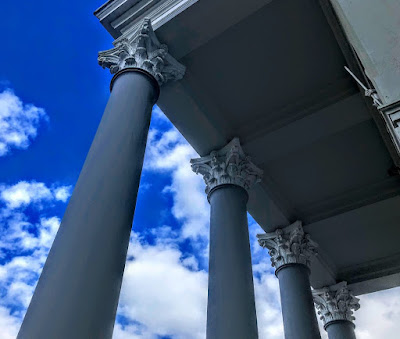 The projecting tetrastyle pedimented portico of the Church of the Most Holy Redeemer, Newport (Photograph: Patrick Comerford, 2021)

The Sisters of Mercy donated the site for a new church in 1928, and the Church of the Most Holy Redeemer was designed by the Dublin architect Ralph Henry Byrne (1877-1946). Tenders were invited in February 1933, and the builder was A Breslan, Bushy Park Road, Terenure.

Ralph Henry Byrne, who designed the church in a classical style, was born in Largo House, 166 Lower Rathmines Road, Rathmines, on 25 April 1877, the third but second surviving son of the architect William Henry Byrne (1844-1917), who had been a pupil of JJ McCarthy. He was educated at home and at Saint George’s School, Weybridge. 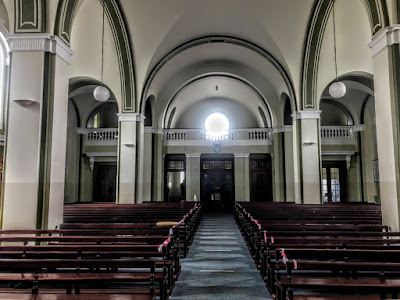 The site for the Church of the Most Holy Redeemer was donated by the Sisters of Mercy in Newport (Photograph: Patrick Comerford, 2021)

Byrne, who worked from 20 Suffolk Street, Dublin, was elected a member of the RIAI in 1902, proposed by George Coppinger Ashlin, seconded by Thomas Drew and William Mansfield Mitchell. He was elected a fellow (FRIAI) in 1920 and was vice-president in 1938, four years his church in Newport was completed.

Ichthus symbols above the doors below the gallery in the church in Newport (Photograph: Patrick Comerford, 2021)

The foundation stone was laid on 9 July 1933, and the church cost £20,000 to build. It was formally opened on the Feast of Christ the King in October 1934. Meanwhile, the former Saint John’s Church continued to be used as a community centre and dance hall until 1980.

The church is impressive and stands out in the town, with its classical style, its tetrastyle pedimented portico and its campanile. It is an interesting example of a mid-20th century church, designed with a neo-classical composition and details such as the colonnaded portico with a pediment over, and the Venetian windows that were reused from the earlier Catholic church.

The church has a double-height front with a projecting tetrastyle pedimented portico with cross finial, and Corinthian columns set above a flight of granite steps. There are eight-panel, vertically-divided timber doors at the entrance. The large round-headed window over the entrance doorway is flanked by niches with statues of Saint Joseph and Saint Patrick.

There are round-headed openings on the first floor, square-headed openings with block-and-start surrounds on the ground floor, and Venetian windows with render pilasters and keystones on the side elevations, all with leaded lights. 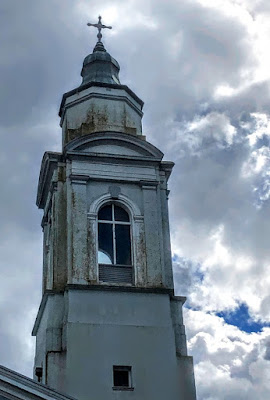 The church has a four-stage tower at the north-west corner (Photograph: Patrick Comerford, 2021)

The church has an interesting, four-stage tower at the north-west corner with a lantern that has an octagonal top.

There are round-headed windows in the lantern of the tower, with render pilasters and keystones flanked by pilasters supporting an entablature and segmental pediments.

There is a semi-circular apse at the rear of the church, and lower projecting porches at the sides.
The church has a copper roof that is set behind a parapet. There are rendered walls with banded string courses and with render quoins on the lower walls. 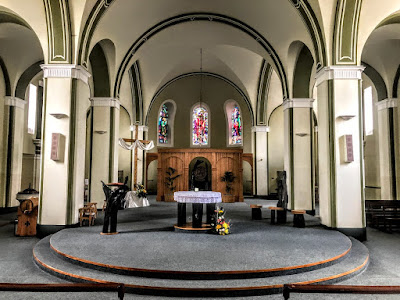 The altar and other furnshings in the new sanctuary are made of bog oak (Photograph: Patrick Comerford, 2021)

Byrne also designed a marble high altar and rails that were executed by CW Harrison & Sons. This was moved and the church was reordered to meet the needs the liturgical reforms introduced after Vatican II.

Later, the marble altar was replaced with an altar of bog oak while Father Joseph Delaney was the Parish Priest of Newport (1990-2013).

The church is an important element in the streetscape due to its design, scale, prominent location, and position opposite the Church of Ireland graveyard and beside the convent school. 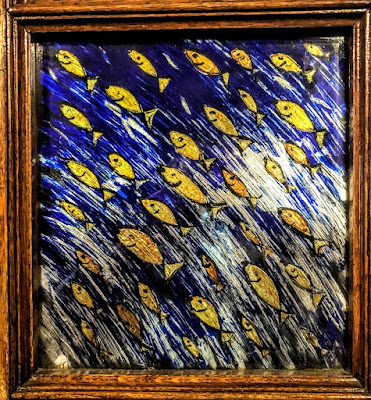 Fish on a glass panel on the internal doors of the church (Photograph: Patrick Comerford, 2021)

Patrick, I fear they may be some confusions in this article concerning Fr Thomas Cooke and the Waller family, relatives of mine. There was never an Edward in the Newport Waller family, but there was a Sir Edmund Waller, the 4th Baronet. However, he was not born until 1797, so could not have been the man who refused a site for the church Fr Cooke wished to build in 1795-1804. His uncle, Sir Robert Waller 2nd bart, would have been the landlord at the time. God bless, Joc Sanders