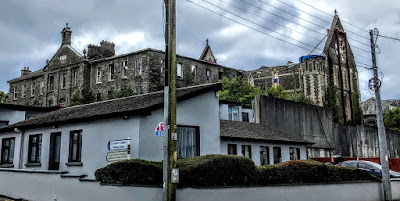 The burned-out remains of the Mercy Covent and Chapel stand on a site above Skibbereen, Co Cork (Photograph: Patrick Comerford, 2021)

In recent months, one of the important buildings in Ireland’s architectural heritage has been lost, when fire destroyed the former Chapel and Mercy Convent in Skibbereen in West Cork.

The buildings were designed in the 1860s by the architectural partnership of Pugin and Ashlin, and – as part of my continuing ‘Pugin trail’ – I wanted to see them during last week’s ‘staycation’ or road trip in West Cork. 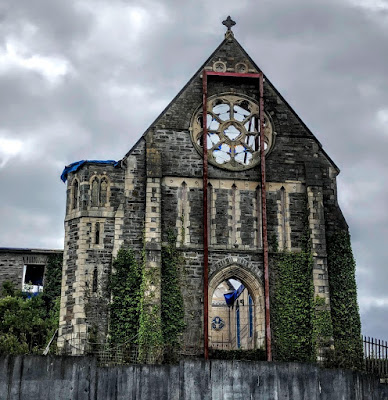 An eight-acre site for the convent was donated in 1850 by Sir William Wrixon-Becher (1780-1850) of Fermoy Castle and former MP for Mallow. He also donated the neighbouring site for Skibbereen Cathedral.

The land was acquired by Revd John Fitzpatrick and a 200-year lease was obtained by Dr William Keane, who became Bishop of Ross in February 1851. Father Fitzpatrick was also involved in forming the first relief committee in Ireland, the Skibbereen Committee of Gratuitous Relief.

A stone wall was built to enclose the site, but it was some years before building work began. The first stone of a new convent was laid on 5 March 1857, in a ceremony led by Bishop Keane. The convent building was designed by the architect Edward Welby Pugin (1834-1875), son of AWN Pugin, the colossal figure in the Gothic Revival in Irish architecture.

The building was almost complete by the end of September 1859, and the first four Sisters of Mercy who arrived from Kinsale at the new convent in Skibbereen in May 1860 were Mother Philomena Maher, Sister Raphael Sexton, Sister Evangelist Fallon and Sister Martha Walsh.

A small temporary chapel was built for the nuns. But soon it was inadequate for their needs, and the foundation stone for a new chapel was laid by Bishop Michael O’Hea of Ross on 8 May 1867. 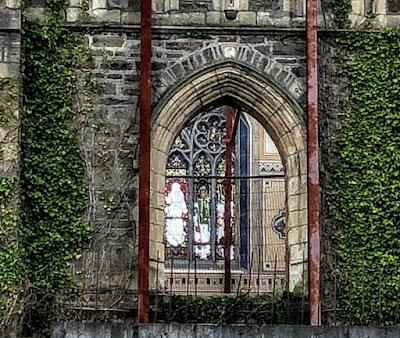 The charred remains of the stained glass in the East Window can be seen through the chapel ruins (Photograph: Patrick Comerford, 2021)

The architects of the new chapel were EW Pugin and his brother-in-law, the Cork-born architect George Coppinger Ashlin (1837-1921), who would design the neighbouring Saint Patrick’s Cathedral in the 1880s.

William Murphy of Bantry was the builder, and the entire building cost £1,500. The chapel was consecrated on 30 April 1868.

The chapel was a highly accomplished French Gothic style church. The balanced coherent design was complemented by the high-quality craftsmanship in the masonry throughout the building. The use of polychromatic stone gave the building an added textured appearance. 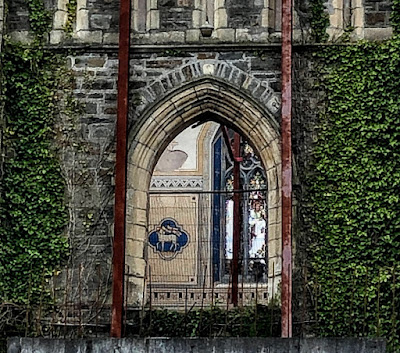 The Lamb of God … part of the remaining stencil work at the east end of the chapel (Photograph: Patrick Comerford, 2021)

This was a gable-fronted single-cell church, with a five-bay nave and an octagonal-plan north corner tower, a pitched slate roof with render coping, carved limestone cross finials and cast-iron rainwater goods.

The chapel had double-leaf timber battened doors with cast-iron strap hinges, and the interior features included carved oak furnishings and stencilled decorations on the walls.

By then, there were 17 nuns in Skibbereen, and their schools had 500 children on the rolls.

The nuns introduced linen weaving by hand looms to West Cork in 1889. Sir William Ewart (1817-1889) of Belfast and Sir Thomas Brady presented them with two looms and a wrapping mill. Four years later they had 23 working looms and were employing a number of poor girls. Their products won first prize at the Working Men’s and Women’s Exhibition in London in 1893, and exhibited at the World’s Fair in Chicago that year.

When the Countess of Aberdeen, President of the Irish Industrial Association, visited the Convent Weaving Industry in 1893, she was lavish in her praise for the work of the nuns and the girls. Her husband was twice Lord Lieutenant of Ireland, in 1886 and 1905-1915.

The nuns opened a secondary school in the 1930s, and a new Mercy Heights School at the top of the Convent Hill was opened in 1971 by the then Taoiseach Jack Lynch.

The connection of the Sisters of Mercy with Skibbereen came to an end in 2004, and Mercy Heights closed in 2016 when the three post-primary schools in Skibbereen were amalgamated in Skibbereen Community School. 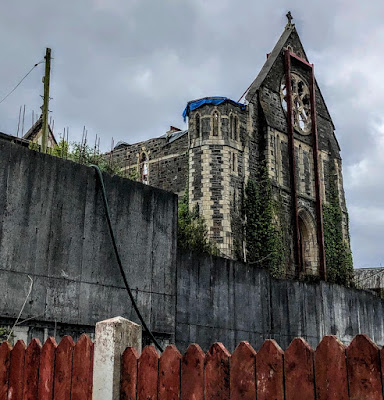 The once beautiful convent chapel and buildings fell into a state of dilapidation and became an eyesore at the northern entrance to Skibbereen. An extensive fire last September destroyed the chapel and former convent. At the time, gardai believed the fire was started by people on the site, either accidentally or intentionally.

The developer Paul Collins of Remcoll Capital, told the local newspaper, The Southern Star, that he was sending a team to Skibbereen to ensure that parts of the building left structurally vulnerable would be made safe and secure. The company was planning a €10 million redevelopment of the convent and chapel and to buy the complex from the owner, Bernard Hennessy.

In recent weeks, Cork County Council has granted planning permission for the former chapel to be redeveloped as a commercial hub, including hot desks for use by the community and the convent to be converted into apartments. Permission was also granted for building 52 new apartments as part of a four-storey apartment block on the site.

Despite its architectural significance, the chapel remains exposed to the elements, and the temporary coverings have blown away in the wind and rain. From the street below it is possible to see inside the chapel, where some of the stencilling and plaster work is being eroded, and parts of the stained-glass windows are being held in place precariously.

The chapel is one of the last works by Pugin and Ashlin. Their partnership was dissolved at the end of 1868, soon after Ashlin’s marriage to Pugin’s sister Mary in 1867. The whole complex is now an eyesore that can be seen from most parts of Skibbereen. But it would be a public shame if the surviving parts of this Gothic Revival treasure are lost wilfully or through neglect. 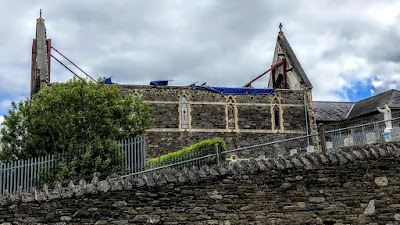 The chapel ws one of the last works by Pugin and Ashlin (Photograph: Patrick Comerford, 2021)

What a beautiful chapel, and convent, this must have been,
and still a witness to the city's history. I hope some of it can be re-used in an appropriate and attractive way.

it's inconcievable dat people burned this church to de ground
adjacent to de nuns place of bur
ial- for all de nuns gave to Ski
bbereen?( - this is the thanks they get - may God forgive those who planned this desecration ??