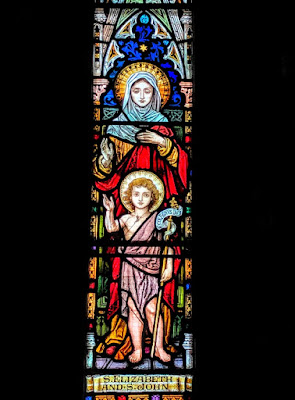 The Birth of Saint John the Baptist Saint John the Baptist (right) with the Virgin Mary and Christ in a stained glass window in Saint Mary’s Church, Lichfield … the births of these three alone are celebrated in the Church Calendar (Photograph: Patrick Comerford)

Saint John the Baptist, in many ways, is the bridge between the old and the new, between the stories of the Prophets and the Gospel stories.

Most saints are commemorated in the Church Calendar on days that are supposed to be the anniversaries of their death.

Three feasts alone commemorate the birth of Biblical figures: the Birth of Saint John the Baptist (24 June), the Birth of the Blessed Virgin Mary (8 September), and the Incarnation of Christ, or Christmas Day (25 December).

But Saint Luke is alone in telling the story of Elizabeth’s pregnancy and the birth of Saint John the Baptist.

Bishops, in their charge to priests at their ordination, call us to ‘preach the Word and to minister his (God’s) holy sacraments.’ But the bishop also reminds us to be ‘faithful in visiting the sick, in caring for the poor and needy, and in helping the oppressed,’ to ‘promote unity, peace, and love,’ to share ‘in a common witness in the world’ and ‘in Christ’s work of reconciliation,’ and to ‘search for God’s children in the wilderness of this world’s temptations.’

As I reflect on these anniversaries this morning, I recall too how my path to ordination began 50 years ago when I was a 19-year-old in Lichfield, following very personal and special experiences in a chapel dedicated to Saint John the Baptist – the Chapel of Saint John’s Hospital, Lichfield.

It was the summer of 1971, and although I was training to be a chartered surveyor with Jones Lang Wootton and the College of Estate Management at Reading University, I was also trying to become a freelance journalist, contributing features to the Lichfield Mercury. Late one sunny Thursday afternoon, after a few days in the countryside in Shropshire, I had returned to Lichfield.

However, I took the scenic route to ordination. I was inspired by the story of Gonville ffrench-Beytagh (1912-1991), who was then then Dean of Saint Mary’s Cathedral, Johannesburg, and facing trial after he opened his cathedral doors to black protesters who being rhino-whipped by South African apartheid police on the cathedral steps.

My new-found faith led me to a path of social activism, campaigning on human rights, apartheid, the arms race, and issues of war and peace. Meanwhile, I moved on in journalism from freelance contributions to the Lichfield Mercury, first to the Wexford People and eventually becoming Foreign Desk Editor of The Irish Times.

As priests, we normally celebrate the anniversary of our ordination to the priesthood and reflect on it sacramentally. But the Covid-19 pandemic brought unexpected restrictions on this meaningful day last year, and I never got back to Lichfield last year either. 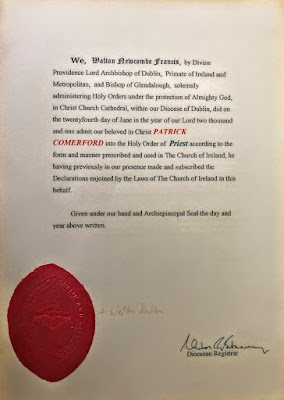 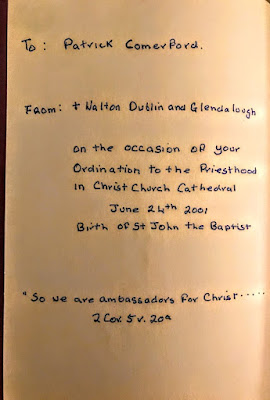 In the saints
you have given us an example of godly living,
that, rejoicing in their fellowship,
we may run with perseverance the race that is set before us,
and with them receive the unfading crown of glory.

Merciful Lord,
whose prophet John the Baptist
proclaimed your Son as the Lamb of God
who takes away the sin of the world:
grant that we who in this sacrament have known
your forgiveness and your life-giving love,
may ever tell of your mercy and your peace;
through Jesus Christ our Lord. 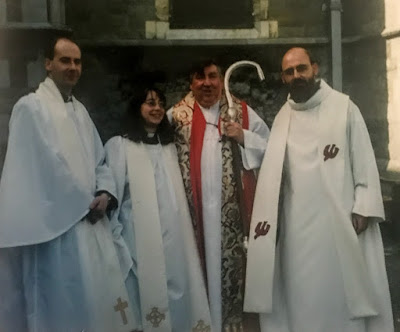 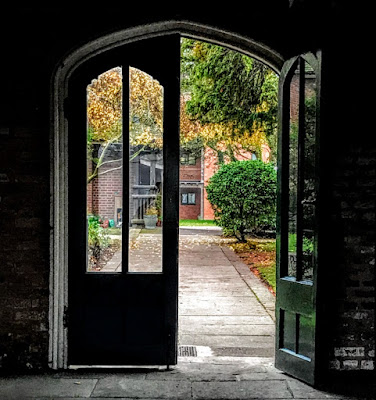 The entrance to the Hospital of Saint John Baptist without the Barrs, Lichfield … opening the doors to a journey that has continued for 50 years (Photograph: Patrick Comerford)