Is Saint Patrick’s Cathedral,
Skibbereen, a cathedral,
or is it a parish church? 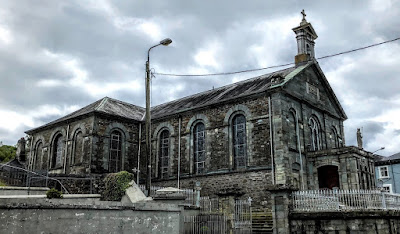 Saint Patrick’s on North Street, Skibbereen, Co Cork … is it a cathedral, or is it a parish church? (Photograph: Patrick Comerford, 2021)

Saint Patrick’s Cathedral in Skibbereen, West Cork, is the Roman Catholic parish church in Skibbereen, but it is often referred to as the cathedral of the Diocese of Ross.

During last week’s road trip or ‘staycation’, I spent two nights in the West Cork Hotel in Skibbereen, and visited Saint Patrick’s to find out for myself. 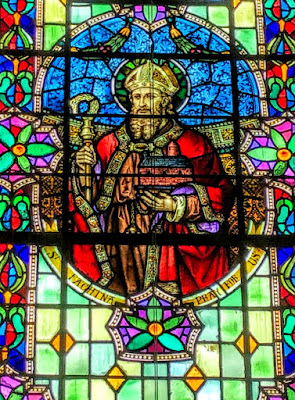 Tradition says the Diocese of Ross was founded by Saint Fachtna in Rosscarbery … a window in Saint Patrick’s Cathedral, Skibbereen, in memory of Bishop Denis Kelly (Photograph: Patrick Comerford, 2021)

The Diocese of Ross was a separate diocese in West Cork until the Reformation. The main part of the diocese included the towns of Baltimore, Skibbereen, Rosscarbery and Clonakilty, and originally included Glengariff and parts of the Beara Peninsula.

Tradition says the see was founded by Saint Fachtna in Rosscarbery. He died ca 590 and his feast day is on 14 August. In the Church of Ireland, the Dioceses of Cork and Ross were united from 1583, and is now part of the Diocese of Cork, Cloyne and Ross.

In the Roman Catholic Church, Ross maintained a nominal, separate identity in the 17th century. But the Bishop of Cork and Cloyne was also the apostolic administrator of the Diocese of Ross from 1693 to 1747, when Ross was united with Cloyne until 1850. 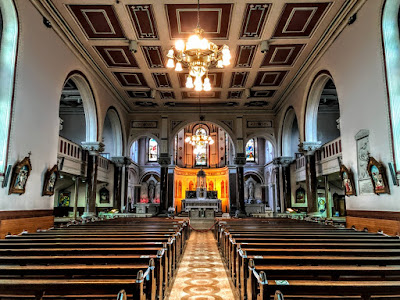 In the late 18th and early 19th centuries, Catholics in Skibbereen worshipped in an old chapel built in Chapel Lane ca 1750. But this chapel had fallen into an advanced state of disrepair by the early 1800s, and was too small for the needs of the town.

Father Michael Collins became the Parish Priest of Skibbereen in 1814, and by 1818 he had put in place plans to build a new church. A site for a new church was secured from Sir William Wrixon-Becher, MP for Mallow, who later donated the land for the adjacent convent.

There is evidence of a 13th century Cistercian house on the site, and later the site was part of the estate of Sir Water Coppinger, who also tried to make extensive claims in Baltimore before the Sack of Baltimore in 1631. Sir William Wrixon-Becher leased the site for Saint Patrick’s for 999 years at a rent of one peppercorn a year.

Michael Collins started collecting money for the new church in 1818, but had to suspend his fundraising because of two periods of severe shortages in this area in 1816-1817 and in 1822. He said he ministered to about 10,000 people in Skibbereen, and that in the summer of 1822 in one part of the parish more than 6,000 paupers were on the charity list, while in the other part there were nearly 3,000 paupers.

However, by 1824 he had collected enough money to start building. The foundation stone was laid in 1825, and the church was designed as a plain Greek Revival T-plan church by the Revd Michael Augustine Riordan, a priest-architect from Doneraile, Co Cork. 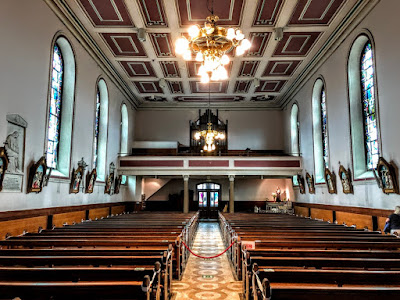 At first, the church was a modest structure with plain glass windows, and the floor was of flagstone where people stood or knelt. It was opened in 1826. The original building is said to incorporate much of the stone from the ruins of Dunagoul, a ruined O’Driscoll castle at Ringarogy on the banks of the River Ilen, about 9 km south of Skibbereen. The cost of building was about £3,000.

A plaque on the west gable is inscribed: Deo Opt Max et Beato Patritio Parochus Populusque extruere AD 1826 Venite adoremus et procidamus ante Deum (‘To the great glory of Almighty God and the Blessed Patrick, the parish priest and people built this church in AD 1825. Come let us adore and fall down before God’).

Father Michael Collins was appointed Bishop of Cloyne and Ross in 1831 but died on 8 December 1832. He is buried in the nave at the south side of the church, under a memorial plaque by sculptor John Hogan. 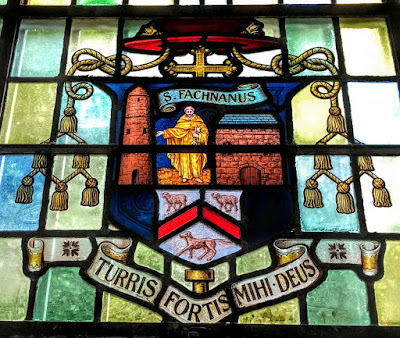 The coat of arms of the Diocese of Ross in a stained-glass window (Photograph: Patrick Comerford, 2021)

The church went through several significant modifications over the two centuries that followed. A small Italianate bellcote was added in 1836. A few years later, a new entrance was built at the west end, and the steps leading up to the church were added, using stone from Sherkin Island. Three galleries were built inside the church in the 1840s.

Much of this work was undertaken by Father John Fitzpatrick, who was the Administrator of Skibbereen in 1835-1851. He cleared an outstanding debt of £600 and erected the new handsome stone front at a cost of £900. He was a member of the Relief Committee in Skibbereen during the Great Famine (1845-1852), and he raised substantial funds for Famine relief.

The Synod of Thurles decided in 1850 to dissolve the union of the dioceses of Cloyne and Ross that had been in place since 1748. Skibbereen became the See of the restored Diocese of Ross and Saint Patrick’s became a Pro-Cathedral. William Keane, parish priest of Midleton, became the first bishop of the new diocese, and there were seven Bishops of Ross from 1851 to 1953.

Bishop Keane moved to Skibbereen, and began using Saint Patrick’s as his pro-cathedral and as a mensal parish. However, some priests and people in the diocese felt that the parish church in Roscarbery, built in 1820 and rebuilt in 1880, should have been designated the cathedral. 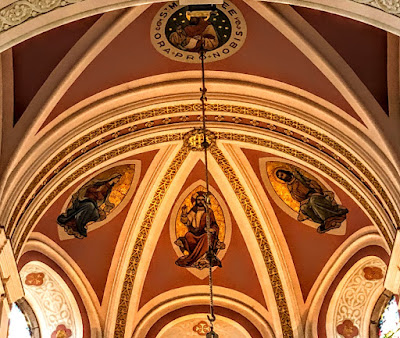 The most significant improvement to Saint Patrick’s was carried out in the early 1880s, when Bishop William Fitzgerald commissioned AWN Pugin’s son-in-law, the Cork-born architect George Coppinger Ashlin (1837-1921), to design a radical modernisation of the church. Ashlin was also the architect of Saint Colman’s Cathedral, Cobh, for the Diocese of Cloyne.

Ashlin gave the cathedral the splendour it displays to this day, and reconfigured the church in the shape of a Latin cross. The east wall behind the original High Altar was opened; a semi-circular apse was added; the apse was embellished by three stained-glass windows; the High Altar, dedicated to the memory of Bishop Michael O’Hea (1858-1876), and the Marian Altar, supplied by Pearse and Sharpe of Dublin, were erected.

The arcade of three arches above the sanctuary and two dividing the transepts from the nave, the polished pillars of granite, the coffered ceiling which they support, all date from 1882-1883. 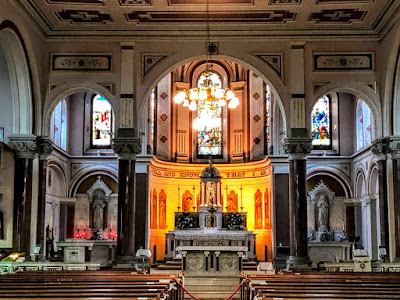 Ashlin gave the cathedral the splendour it retains to this day (Photograph: Patrick Comerford, 2021)

The white marble altar rail was the work of Pearse and Sharp of Dublin; James Pearse was the father of the 1916 leader Padraig Pearse. The wrought iron panels, with their floral and leaflet decoration, were the work of Eugene McCarthy of Skibbereen.

The High Altar was consecrated on the first Sunday in May 1883 and the reconstructed church was blessed and re-opened.

The present Blessed Sacrament Chapel, formerly the mortuary, and the Sacred Heart altar were erected in 1910. Much of the stained glass also dates from the 1920s, seating was provided in the whole church – until then, there was only a few pews at the top of the church – and electric lighting was installed.

Bishop Denis Moynihan added two internal porticos of glass and wood inside both transept entrances in 1950, and the present pulpit was erected. 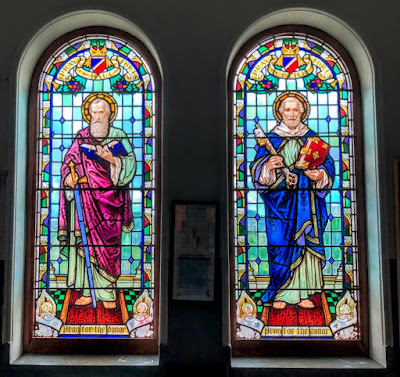 After 100 years as a Pro-Cathedral, Saint Patrick’s was granted full cathedral status in 1951 by Bishop Moynihan. But when he was transferred to Kerry in 1953, the Diocese of Ross again lost its independence. Bishop Cornelius Lucey of Cork was appointed apostolic administrator of Ross in 1954, and Ross was officially united with the Diocese of Cork in 1958.

With the introduction of liturgical changes after Vatican II, a new altar was provided in the sanctuary in 1970 to allow the celebrant to face the congregation.

The bellcote, which perches precariously on the west gable, and the statue of Saint Patrick avove the west porch (1882) are the only notable external features. But the bell fell in 1987 and has been moved inside the cathedral, where it stands on a plinth in the north-west corner of the nave, with an inscription, ‘The Cathedral Bell 1835-1997.’ 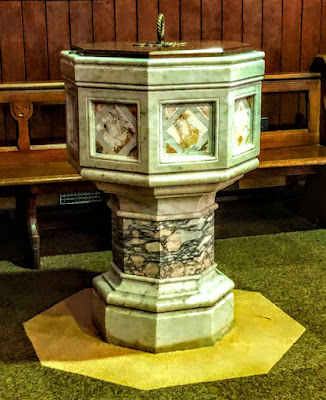 The baptismal font is now in the north transept (Photograph: Patrick Comerford, 2021)

In later alterations in 2004-2005, the temporary table-type altar and ambo from the 1970s and the pulpit (1950) were removed, and the baptismal font was taken away from the south side of sanctuary. The altar rails (1882) were repositioned, and an altar was salvaged from the former Mercy Convent, which had closed in 2002, and was recondition and altered.

Bishop John Buckley rededicated the new altar and blessed the sanctuary area on 21 May 2005. 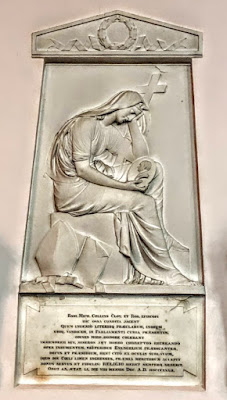 The marble memorial on the south wall to Bishop Michael Collins is work of the sculptor John Hogan (Photograph: Patrick Comerford, 2021)

But the question remains whether Saint Patrick’s is a cathedral or a parish church. When Bishop Denis Moynihan (1941-1953) returned from a visit to Rome in 1951, he declared Saint Patrick’s had full status as a diocesan cathedral.

However, he was moved to Kerry some months later, and in 1958 a papal bull united the dioceses of Cork and Ross ‘in an equally principal manner.’ It spoke of Ross as ‘illustrious in its antiquity and glory.’ But, among the reasons for this unification, the Bull referred to the ‘small boundaries’ of Ross, and said the diocese ‘lacks a cathedral church’ – which contradicts Bishop Moynihan’s declaration in 1951. 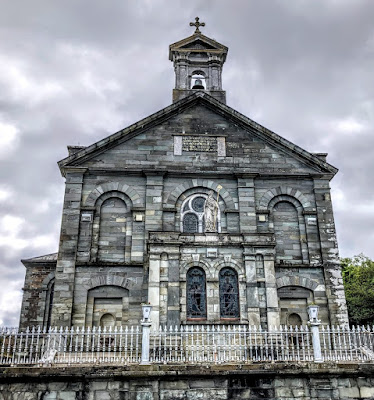