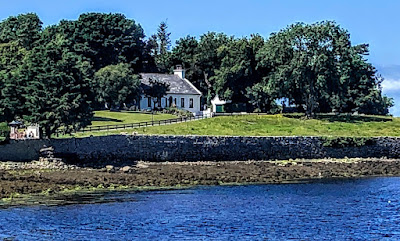 Delamaine Lodge, on the west side of Kinvara Bay, was owned by the Comerford family in the mid-19th century (Photograph: Patrick Comerford, 2021)

The summer ‘road trip’ brought me to Spanish Point on the west coast of Clare, where I visited Comerford Lodge, a former Comerford family home now known as ‘Clare Cottage.’

I promised myself then I would return to the area to see some more houses once associated with the Comerford family, including Delamaine Lodge in Kinvara, Ballykeel House in Kilfernora, and some Comerford houses in Ennistymon.

Delamaine Lodge takes its name from the de la Maine or Delamaine family, although it is said the house was built on or from the remains of the 16th century Kinvara Castle. Kinvara Castle and Dunguaire Castle have been referred to by some writers as the ‘twin towers of Kinvara.’

Kinvara Castle, or Ballybranaghan, was one of several castles in the area once owned by the O’Heyne family. Kinvara Castle is said to have been destroyed in the 17th century conflicts, although its destruction may date from the tsunami caused by the Lisbon earthquake in 1755. By the early 1850s, Kinvara Castle was said to be on the verge of complete decay. 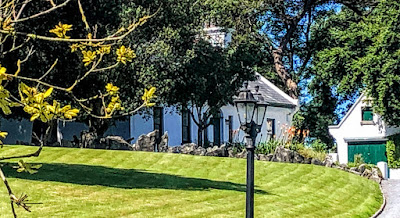 Delamaine Lodge is a villa-style house with a strong sense of symmetry, established by its central doorway, sidelights and associated steps. Other details, such as its unusual chimney pots and the retention of timber sash windows add further interest. This five-bay, single-storey house over half-basement, was built ca1775, with a gabled return at the rear or west elevation.

Captain William Delamain (1713-1793) was involved in contraband trade in Kinvara. His son, James Delamain, was sent to France in 1751 at the age of 13, to learn French and the Cognac trade. He married Marie Ranson and established the Jarnac cognac firm, known today as Delamain and Co.

Captain William Delamain also moved to France in 1788 and lived with his son’s French family until he died in 1793. The lease of Delamaine Lodge, with its furniture, was sold by auction on 25 March 1793.

There was another important connection linking Kinvara and France at that time: The French family of Doorus Demesne were the landlords of Kinvara in the 18th century. James French conformed to the Church of Ireland in 1762, but he lived most of his life in his chateau at Chaillot near Paris. While he was living in France, his daughter Frances married Bartholomew de Basterot in 1770.

At the end of the 18th century, James French sold part of his large estate at Doorus and Kinvara to Robert Gregory (1727-1810) of Coole, who became the new landlord of Kinvara. French’s great-great grandson, Count Florimond de Basterot, observed, ‘In this way, the splendours of Chaillot were financed by a sale in Kinvara.’

Robert Gregory’s grandson, Robert Gregory (1790-1847), worked to improve the town of Kinvara. He made substantial improvements to the pier in 1807 and 1808, and probably built the large grain store that faces the quay. According to Samuel Lewis, in his Topographical Dictionary (1837), some of the stone used in the pier was taken from the ruined Kinvara Castle near the quay. 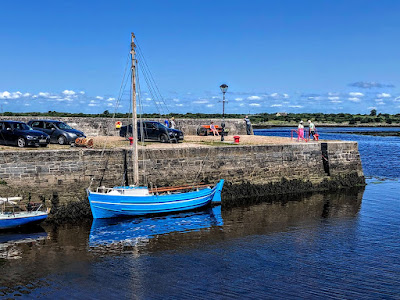 The stone used in building Kinavra Pier in 1807-1808 may have come from the ruins of Kinvara Castle (Photograph: Patrick Comerford, 2021)

Sir William Henry Gregory (1817-1892) was the only son of Robert Gregory and his wife Elizabeth O’Hara. Gregory was heavily addicted to gambling and horseracing, and he was so heavily indebted after the Famine that his portions of the Kinvara estate were sold in the Encumbered Estates Court in 1857. Kinvara was reported to be on the verge of complete decay, and the Kinvara estate was bought by Henry Comerford (1795-1861), a Clare-born Galway merchant who had inherited Ballykeel House, Kilfenora, Co Clare, after his marriage to Margaret McDonagh in 1824.

Henry Comerford was born in Co Clare, the son of George Comerford, and lived in Galway. He was a merchant, landowner and magistrate. He is also remembered as the proprietor of the St John, a Galway brig whose shipwreck was one of the most tragic events during the mass exodus from Galway and Clare in the aftermath of the Great Famine. The St John left Galway on 7 September 1849, was wrecked near Cohasset off the coast of Massachusetts on Sunday 7 October 1849, with almost 100 deaths.

Henry Comerford’s purchase in 1857 included the Tolls and Customs of Kinvara, Delamaine Lodge, the area known as Town Parks, the Fair Green, the gatehouse and the animal pound, totalling 331 acres. By then, he was also leasing the house and demesne at Doorus to Count de Bastertot, and he had acquired property in the surrounding area, including Rineen, Kilcummin, Killannin, and Kilmoylan. He paid over £35,000 for 4,440 acres of land in Co Galway in the 1850s, and also owned lands in Drumcreehy and Kilfenora in the Burren, Co Clare. 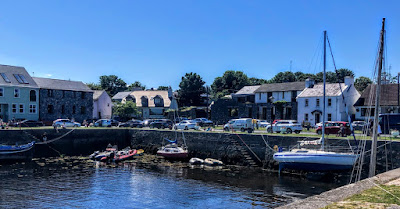 The former tenants of the Gregory estate in Kinvara had no security of tenure when Henry Comerford increased their rents drastically. As soon as he took possession of the estate, he started to double and even treble existing rents.

According to Jerome Fahy, in his History and Antiquities of the Diocese of Kilmacduagh, the results were disastrous: ‘the comparatively short interval of about twenty years witnessed the ruin of over a thousand homesteads in one parish’ on Comerford property. The parish priest, Father Arthur observed, ‘The change of landlords for the greatest portion of this place has rendered this one of the most wretched and deplorable parishes in Ireland.’ It was, he said, impossible to obtain aid even from the merchants of Kinvara because, as a result of Comerford’s actions, they were ‘bereft of all hope.’

Henry Comerford died on 6 December 1861. His brother, Isaac Comerford, a merchant in Galway and a draper and general shopkeeper in Kinvara, was adjudged a bankrupt, and his assets were seized on behalf of Todd Burns & Company, Mary Street, Dublin.

Henry Comerford and his wife Margaret McDonagh were the parents of a large family of 12 children. One daughter, Mary Josephine, married Captain Francis Blake Forster of Forster Street, Galway. Another daughter, Henrietta Emily (1837-1881), had first married Isaac Breen Daly (1835-1871) of Dalysfort, Galway, and they seem to have lived at Delamaine Lodge for a time. Isaac Breen Daly also owned 1,225 acres in Co Clare.

The Galway Vindicator in 1855 named Daly ‘among the good and charitable landlords of the parish,’ along with Henrietta’s brother-in-law, Captain Francis Blake Forster, who had bought the Doorus Demesne house and estate and later also portions of Kinvara to the west of the glebe lands.

When Isaac Breen Daly died at Sea Road, Salthill, on 16 December 1871, his estate was declared bankrupt and was sold by at auction court order in 1873. The Daly Estate was bought for £13,000 by William Henry Sharpe and Henrietta Sharpe. But they never lived in Kinvara, and the property was almost immediately leased to Henrietta’s brother-in-law, Captain Francis Blake Forster of Doorus Demesne, who also acquired the Tolls and Customs and Fairgreen fees.

By then, the widowed Henrietta (Comerford) Breen had married the younger John Joseph Ireland (1849-1876) in Galway on 28 November 1872: he was 23 and living at Dominick Street; she was 30 and living at Montpelier Terrace, Sea Road, Galway, and at their wedding she was described as ‘Lady.’

John Ireland died in 1876 at the age of 27, and the widowed Henrietta moved to live with her sister Mary Josephine (Comerford) and her brother-in-law Captain Francis Blake Forster in Forster Street, Galway. These two Comerford sisters, Henrietta and Mary, handed on many of the Comerford family legends to Mary’s son, the antiquarian and genealogist, Charles ffrench Blake Forster (1851-1874).

The ground rents of Kinvara were finally bought by the tenants in the 1940s.

As for Delamaine Lodge, it was leased to Roman Catholic Church in mid-19th century, and served as the parish presbytery in Kinvara. Father Francis Arthur lived there while he was Parish Priest of Kinvara (1847-1866). Canon Fahy, Parish Priest of Kinvara in 1918, replaced the thatch roof with a slate roof and raised the gables, installed the first back door, and added a small extension that included the first bathroom.

Canon Mulkerrrin was the last parish priest to live in the house. Bishop Michael Browne sold the house in 1976 to Galway business interests. By 1979, the house was owned by the Branick family from California.

The next Comerford family home to search for in the area was Ballykeel House, Kilfenora, Co Clare, once the home of Henry Comerford.

Kinvara and Delamaine Lodge, seen from Dunguaire Castle, on the east side of Kinvara Bay (Photograph: Patrick Comerford, 2021)