As Kabul fell into the hands of the Taliban once again this week, I share the fears of many for the future of so many people in Afghanistan – women, young girls, the educated, liberal Muslims, and religious minorities, including the Shia minority among Muslims, Hindus, Sikhs, Christians, and the last remaining Jew in Kabul.

Afghanistan’s last known remaining Jew has refused attempts to evacuate him from Kabul in the last day or two following the Taliban takeover earlier this week. Zabulon Simantov (62) initially agreed to be evacuated, but then changed his mind, according to reports that spoke of an aborted rescue mission.

Legends claim that Balkh was the burial place of the prophet Ezekiel and the home of the prophet Jeremiah. There is a tradition among the Pashtuns of Afghanistan that they are descended from the exiled lost tribes of Israel. Interest in the topic was revived recently by a Jerusalem anthropologist, Professor Shalva Weil, who was quoted in the popular press to the effect that the ‘Taliban may be descended from Jews.’

Legends aside, a Jewish presence flourished in eastern Afghanistan from about the 7th century. Afghanistan was once home to an estimated 40,000 Jews, centred in Herat, an oasis city along the ancient Silk Road. That number dwindled to fewer than 5,000 by the middle of the 20th century, as the community faced persecution from successive regimes that, influenced partly by Nazi propaganda and beliefs that Jews were ‘Bolshevik agents,’ restricted where they could live and work.

The Jewish presence in Afghanistan virtually disappeared from the 1950s, with its emigration to Israel, India, Britain and the US. When the Taliban first came to power in 1996, the Jewish population had dwindled to single digit numbers.

In an interview with the Indian news network WION three days ago, Zabulon Simantov said that while he had the opportunity to flee to the US, he had decided to remain behind to look after Afghanistan’s last standing synagogue.

Earlier this year, he told Arab News he would leave Afghanistan after the High Holy Days, which begin on Rosh Hashanah next month (6 September).

His wife, a Jew from Tajikistan, and their two daughters have lived in Israel since 1998. But Simantov stayed on in Afghanistan to look after its last remaining synagogue in Kabul, through decades of violence and political turmoil.

Zabulon Simantov, a carpet and jewellery merchant, was born in Herat, once home to hundreds of Jews. He eventually moved to Kabul but fled to Tajikistan in 1992 before returning to Kabul. Since then, he has lived the synagogue – which he has renovated– in the heart of Kabul’s flower district.

Should he leave Kabul, the synagogue will close, bringing to an end Jewish life in Afghanistan after 1,500 to 2,000 years … or more.

He became the country’s last Jew when Yitzhak Levi died in 2005. The pair famously did not get along and in 1998 Levi wrote to the Taliban interior minister to accuse Simantov of theft of Jewish relics. Simantov retorted by telling the Taliban that Levi ran a secret brothel where he sold alcohol. The Taliban jailed both men, but eventually released them when they continued to fight in prison.

Their story inspired Michael J Flexer’s play My Brother’s Keeper, staged by the Apikoros Theatre Company at the Edinburgh Fringe Festival in 2006. The play tells the tale of the last two remaining Jews in Afghanistan under Taliban rule. They harbour a bitter hatred for one another, born out of their enforced co-habitation in a small, dilapidated synagogue, and spend the duration of the play feuding in fiery fashion.

Michael J Flexer told interviewers at the time that he had ‘tried to infuse the play with that feisty yet phlegmatic Jewish gallows humour,’ and that he wanted the play to get across the idiocy of religious intolerance: ‘The comedy comes from the fact that, in this case, there was only one religion involved!’

However, in the past week, comedy has given way to disturbing reality, and fears grow for everyone with the return of Taliban rule.

In the Hebrew calendar, this is the Jewish month of Elul (אֱלוּל‎), which comes before the month of Tishrei, when Jewish communities celebrate the High Holy Days, including Rosh Hashanah, which begins on Monday evening 7 September 2021, and Yom Kippur (Wednesday 15 September 2021).

As Elul is the last month in the Jewish yearly cycle, it is seen as a month of reflection on the previous year and as time to look forward to the coming new year.

As part of the preparation in Elul for the High Holy Days, it is also customary to recite Psalm 27 every day from Rosh Hodesh Elul until Hoshanah Rabbah (21 Tishrei, 27 September 2021).

In my reflections this Friday evening, I am reading Psalm 27, the psalm said by many during the month of Elul, and an appropriate Psalm to read as we contemplate the fears of many people in Afghanistan this week:

2 When evildoers assail me
to devour my flesh—
my adversaries and foes—
they shall stumble and fall.

3 Though an army encamp against me,
my heart shall not fear;
though war rise up against me,
yet I will be confident.

4 One thing I asked of the Lord,
that will I seek after:
to live in the house of the Lord
all the days of my life,
to behold the beauty of the Lord,
and to inquire in his temple.

5 For he will hide me in his shelter
in the day of trouble;
he will conceal me under the cover of his tent;
he will set me high on a rock.

6 Now my head is lifted up
above my enemies all around me,
and I will offer in his tent
sacrifices with shouts of joy;
I will sing and make melody to the Lord.

Do not turn your servant away in anger,
you who have been my help.
Do not cast me off, do not forsake me,
O God of my salvation!
10 If my father and mother forsake me,
the Lord will take me up.

11 Teach me your way, O Lord,
and lead me on a level path
because of my enemies.
12 Do not give me up to the will of my adversaries,
for false witnesses have risen against me,
and they are breathing out violence.

13 I believe that I shall see the goodness of the Lord
in the land of the living.
14 Wait for the Lord;
be strong, and let your heart take courage;
wait for the Lord! 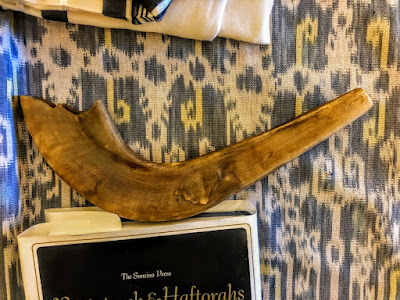 A Shofar in the Beth-El Synagogue near Bunclody, Co Wexford (Photograph: Patrick Comerford)