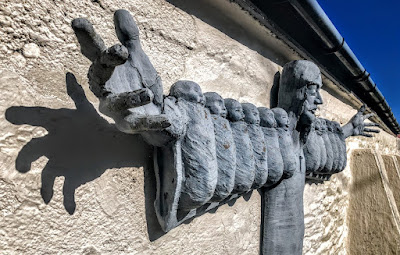 It is two years since I have been in Greece. But now that the vaccine has been rolled out and – despite the forest fires and soaring temperatures in August – Greece appears to be as safe a place to be as Ireland.

I hope to be back in Crete later in September, returning to an island that has been almost like a second home since the 1980s. 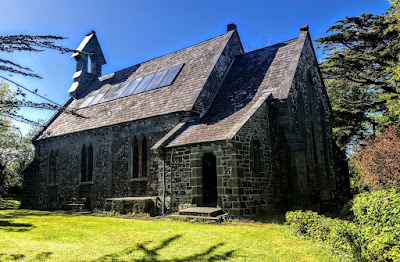 Returning to Valentia
by accident

As the first promises of summer arrived, we spent a day at Kells Bay House and Gardens and Kells Bay Beach on the north loop of the Ring of Kerry, and as the day, drew to a close we visited Cahersiveen.

Cahersiveen’s place in church history includes the story of Monsignor Hugh O’Flaherty (1898-1963), who is known as the ‘Scarlet Pimpernel of the Vatican,’ for his daring exploits and the rescue of over 4,000 people, including Jews and Allied soldiers, in Nazi-occupied Rome.

The town’s Roman Catholic parish church is named the Daniel O’Connell Memorial Church, in honour of the monumental figure in Irish politics in the early 19th century. Saint Finian’s, the former Church of Ireland parish church in the town, has housed the Oratory Pizza and Wine Bar since 2016.

As the early summer sunshine continued to linger, we found ourselves on the ferry to Valentia Island once again, and visiting the Church of Saint John the Baptist in Knightstown, which claims to be ‘the most westerly Protestant Church in Europe.’

A sign outside the church claims it is ‘the most westerly Protestant Church in Europe.’ But, of course, that depends on how you draw the maps and boundaries of Europe. No doubt, churches in Iceland could make similar claims, but is Greenland part of Europe of part of the North American continent? 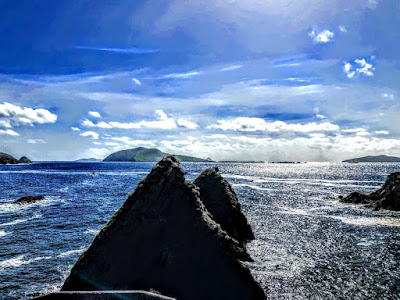 The literary legacy of
the Blasket Islands

Their books continue to be read, and most Irish people are still familiar with the names of Peig Sayers (1873-1958), no matter how negative their memories are of her book, and Muiris Ó Súilleabháin and Tomás Ó Criomhthain.

But my schoolboy experiences of the Kerry Gaeltacht in Ballinskelligs have left me with a life-long affection for this part of Ireland, and a day-long guided tour of the Blasket Islands seemed inevitable during a summer visit to the Dingle Peninsula. 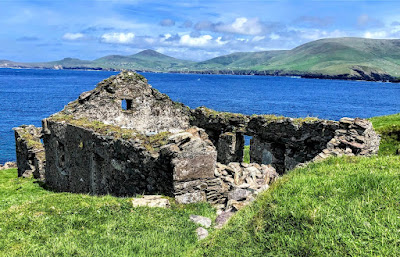 The Church of Ireland school on the Great Blasket set up by Mrs Thompson from Ventry lasted a mere two or three decades (Photograph: Patrick Comerford, 2021)

A number of books were written in the early 20th century by islanders, recording island traditions and way of life. These include Peig or Machnamh Seanamhná (An Old Woman’s Reflections) by Peig Sayers (1939), An tOileánach (The Islandman) by Tomás Ó Criomhthain (1929), and Fiche Blian ag Fás (Twenty Years a-Growing) by Muiris Ó Súilleabháin (1933).

During my visit, I began to feel sorry for Peig, with her arranged marriage, her sorrows, her hardships, the children who died without the joys of childhood, the reproaches for her grief and mourning, and the bodies falling out of coffins.

They were stories that should never have been imposed on young teenagers in the 1960s. My new-fond sympathy for Peig was complimented during that visit by comparisons of Tomás Ó Criomhthain with his Russian contemporary Maxim Gorky, placing him within the corpus of European literature of the day. 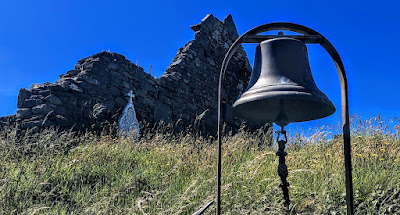 Clear Island or Cape Clear Island (Cléire or Oileán Chléire), 8 miles off the south-west coast of Co Cork, is the most southerly inhabited part of Ireland. Cape Clear is 3 miles long by 1 mile wide. Most of the 147 residents are bilingual in Irish and English, making this Ireland’s southern-most inhabited Gaeltacht island.

Mizen Head, the mainland’s most southerly point, is to the north-west. The nearest neighbouring island is Sherkin Island, 2 km to the east, and the solitary Fastnet Rock, with its lighthouse, is three miles west of the island. The boat trip from Baltimore this summer took only 40 minutes, with views of the rugged coastline West Cork and occasional sightings of dolphins.

Arriving on the ferry from Baltimore into the North Harbour, the first archaeological and ecclesiastical site the visitor sees are the ruins of a 12th-century church, close to the main pier, with Saint Ciaran’s Well beside it. 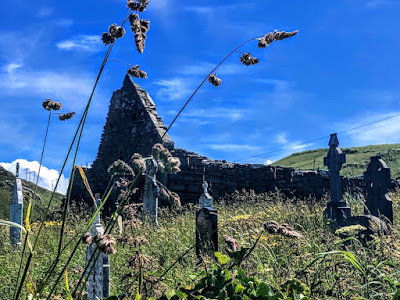 Saint Ciarán, the island’s patron, is allegedly one of Ireland’s four, early pre-Patrician saints. He is said to have been born on the shoreline beside the harbour, Trá Chiaráin, in front of the well, and the islanders gather there to mark his feast on 5 March each year.

Saint Ciarán of Saighir was one of the ‘Twelve Apostles of Ireland’ and was the founding Bishop of Saighir (Seir-Kieran). He remains the patron saint of the Diocese of Ossory. Sometimes he is called Saint Ciarán the Elder to distinguish him from Saint Ciarán of Clonmacnoise.

The reverence for Saint Ciarán is reflected in the proliferation of his name on Cape Clear Island, from beaches to holy wells, from churches to graveyards. Indeed, almost every family includes someone with the name Ciarán.

The ruins of Saint Ciaran’s Church, a 12th century rectangular church surrounded by a graveyard, face the North Harbour. A steep climb from the harbour and a 15-minute walk lead up to Saint Ciarán’s Roman Catholic Church, built in 1839. It is the southern-most church still in use in Ireland. 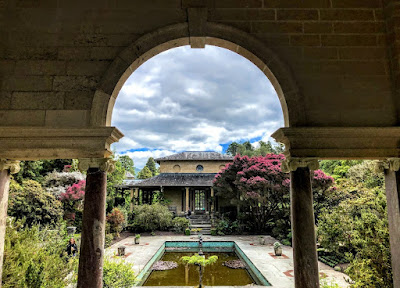 The Italian Garden is the outstanding feature on Garinish Island (Photograph: Patrick Comerford, 2021)

The Harbour Queen ferry from Glengarriff Pier brought us to Garinish Island at the mouth of Bantry Bay. Garinish is renowned for its gardens, laid out in beautiful walks and it has specimen plants that are rare in this climate.

Garinish Island extends to 15 hectares (37 acres). The gardens on Garnish Island flourish in the mild humid micro-climate of Glengarriff Harbour. This is an island garden of rare beauty, assisted by a mainly pine shelter belt, and known to horticulturists and lovers of trees and shrubs around the world.

The gardens were designed by the architect and garden designer Harold Peto (1854-1933) for the island’s owners, John Annan Bryce (1841-1923), a Belfast-born Scottish politician who bought the island from the War Office in 1910, and his wife Violet (L’Estrange).

Peto and Bryce were a creative partnership, so the island is still renowned for its richness of plant form and colour, changing continuously with the seasons.

The Italian Garden is, perhaps, the outstanding feature of Garinish. Here, Peto’s genius, combined with Bryce’s ideas and resources, resulted in the creation of a formal architectural garden that blends with its natural setting.

The Martello tower on the island dates from the time of the Napoleonic Wars. Plans were drawn up for a mansion incorporating the Martello Tower, but it was never built. Instead, Bryce House, an extensive cottage, became the home of the Bryce family.

Among the guests were the writers George Bernard Shaw, who stayed on the island in 1923 while writing his play, Saint Joan, the poet Æ George Russell, and Agatha Christie.

Bryce House is presented as it would have appeared when the Bryce family lived there. A selection from their vast collection of important paintings, prints, drawings, and books is on display.

A theme throughout the house is the winged lion of Saint Mark, the symbol of Venice – yet another reminder of the Mediterranean during an island-hopping expedition in Ireland this summer.

This two-page feature was first published in the September 2021 edition of ‘The Church Review’ (Dublin and Glendalough), pp 14-15 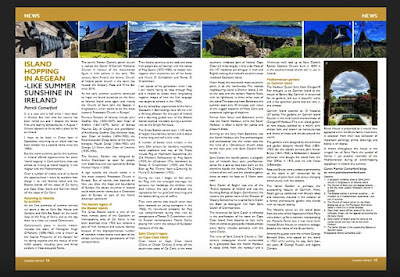