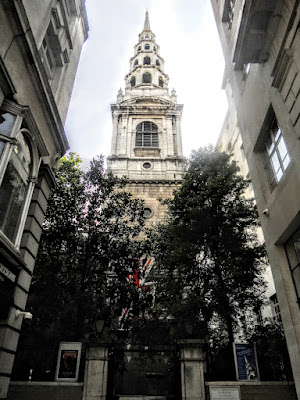 I am planning to catch a flight later today, which looks like a busy day travelling.

My theme for the coming weeks is Wren churches in London, and my photographs this morning are from Saint Bride’s Church, Fleet Street.

The steeple of Saint Bride's, Fleet Street, has inspired the tiered wedding cake of many brides (Photograph: Patrick Comerford)

The present Saint Bride’s was designed by Sir Christopher Wren. Building work began in 1673, and the spire, completed in 1703, is 234 feet and the highest built by Wren. The steeple is the model for the now traditional wedding cake, first made by a baker on Ludgate Hill in the 18th century. The design uses four octagonal stages of diminishing height capped with an obelisk that terminates in a ball and vane.

One evening, over 100 years ago, a vicar’s son – who was abandoning his legal profession and becoming a writer – was walking back to his father’s vicarage at Saint Bride’s in London.

As a writer and as Vicar of Saint Bride’s, Anthony Hope’s father, the Revd Edwards Comerford Hawkins (1827-1906), had developed the tradition of Saint Bride’s providing a spiritual home and refuge for journalists and writers.

Soon after arriving as Vicar of Saint Bride’s, the Revd Edwards Comerford Hawkins published his own history of Wren’s church. His full name appears on the list of vicars inside the porch of Saint Bride’s, and a plaque commemorating him is now in the crypt.

After the church was gutted by firebombs during the Blitz in 1940, it was rebuilt at the expense of newspaper proprietors and journalists.

Over the past three or four decades, the press has abandoned Fleet Street, moving out to Wapping, Canary Wharf, the South Bank and Kensington. But Saint Bride’s remains at the heart of press and media life in London, and the church is still a frequent venue for baptisms, weddings and funerals for journalists and their families.

There were constant vigils in Saint Bride’s in the 1980s and 1990s for John McCarthy, Terry Anderson and other journalists held hostage in Lebanon. When four young journalists were hacked to death in Somalia in 1993, Saint Bride’s was the appropriate place for the Service of Thanksgiving for their lives and work. The journalists’ altar in the north aisle – where those vigils were held – is dedicated to those who have lost their lives in the task of bringing us the news and bringing us the truth.

Today, the Rector of Saint Bride’s is the Revd Canon Dr Alison Joyce, a former lecturer in Christian Ethics and Anglican Studies at Queen’s College (now the Queen's Foundation), Birmingham. From 1999 to 2014, she was Chaplain to the Community of Saint John the Divine in Alum Rock, the religious order featured in the television series Call the Midwife. 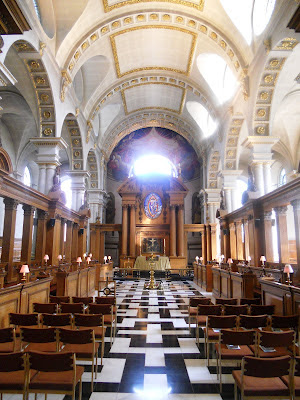 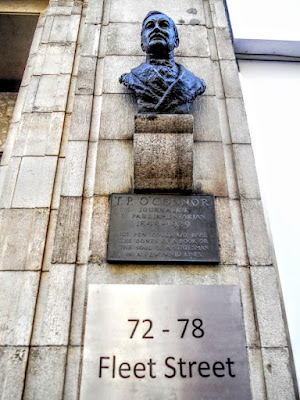 The presses have gone, but Fleet Street still has many memories of journalists and newspapers (Photograph: Patrick Comerford)

The Prayer in the USPG Prayer Diary today (6 September 2021) invites us to pray:

Let us pray for the Church in the Province of Central Africa, comprising 15 dioceses across Malawi, Botswana, Zambia and Zimbabwe. 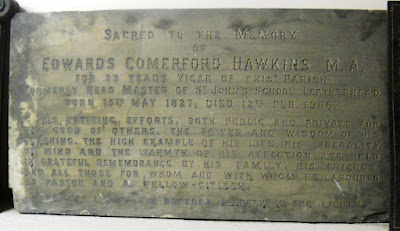