Setting limits to our compassion
… or inviting all to the banquet?

But she answered, ‘Sir, even the dogs under the table eat the children’s crumbs’ (Mark 7: 28) (Photograph: Patrick Comerford) 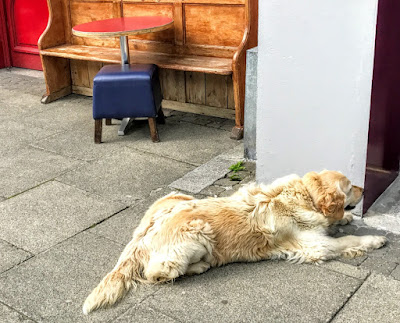 But she answered, ‘Sir, even the dogs under the table eat the children’s crumbs’ (Mark 7: 28) … seen on the streets in Ballybunion, Co Kerry (Photograph: Patrick Comerford)

I am an avid fan of soap operas like EastEnders. All human life is there.

When my children were younger, EastEnders gave us an opportunity to talk about major life issues without having to point fingers at anyone we know.

We could talk about drugs, gambling, business ethics, sexuality, relationships, domestic violence, poverty, racism, justice and injustice … all within context, but without naming or shaming anyone we know.

But context is everything. If you watch it regularly, then the profile of each character is built up night-by-night, week-by-week.

However, if you miss an episode, or miss a week, then you cannot come to a full and fair judgment or evaluation of someone’s actions and their intentions, or come to any conclusion about causes and consequences.

And we might realise the same with our readings these weeks from Saint Mark’s Gospel, including this morning’s reading about the Syro-Phoenician woman.

Context is all important: why does Jesus seemingly refuse at first to offer hope and comfort to this woman and her daughter?

Why do the disciples encourage him to show no compassion?

Why does Jesus use such shocking, crude language when he speaks to this woman?

This story is set in the area around today’s northern Israel and south Lebanon. Even to this day, dogs are not seen as the sort of animals that should be in the same room as we eat.

Is Jesus telling this woman she is dirty in her domestic habits?

Last week, in our Gospel reading we heard how the very same accusation was made against Jesus and his disciples – accused of not washing their hands before eating.

Is Jesus using language that is so direct and so shocking that it amounts to implying her daughter is a ‘little bitch’?

My friend and colleague Dr Clare Amos is a Biblical scholar who has worked in that area – in Jerusalem and Lebanon – for many years. She is now Director of Lay Discipleship in the Diocese in Europe, and like me she prepares a weekly blog that is related to the weekly lectionary readings.

In between these two very similar stories, we hear about the Syrophoenician woman and her encounter with Jesus. And bread, once again, is a prominent theme in their exchange that could be a script for an episode of EastEnders.

Jesus says to her, ‘Let the children be fed first, for it is not fair to take the children’s food and throw it to the dogs.’

If Christ’s retort is meant to be witty, then the woman is also witty in her reply, appearing to ask whether her thinks her daughter is a ‘little bitch’: κυνάριον (kinárion) in verse 28 in our reading is translated as ‘dog’, but it is diminutive and could be more accurately rendered as ‘little dog’ … even ‘little bitch’!

This exchange is both witty and compassionate. Like so many classical dramas, it is a mixture of comedy and tragedy, and it alludes to a well-known Greek play, the Phoenician Women (Φοίνισσαι, Phoinissai), a tragedy by Euripides.

In our reading, she is described as ‘a Gentile, of Syrophoenician origin’ (verse 26). But the original Greek text describes her as ‘a Greek, a Syrophoenician by birth’ (ἦν Ἑλληνίς, Συροφοινίκισσα τῷ γένει). The Clementine Homilies name her as Justa and her daughter as Bernice. But, like so many women in the Gospels, they are unnamed.

At first, it appears, Jesus is not willing to heal this woman’s daughter.

Is this because he is afraid, once again, of being accused, along with his disciples, of being ritually unclean?

Or, as I have asked before in previous sermons after we have met this woman in the Gospel readings, is his unwillingness, his reluctance, a dramatic pose that challenges the disciples to think again about the limits of their compassion?

Some years ago, when I bumped into the journalist, broadcaster and lay theologian the late Seán Mac Réamoinn in Saint Anne’s Church, Dublin, I asked him how he was.

He told me he felt like a filled-out census form.

I must have looked puzzled, so he explained: ‘I’m broken down by age, sex and religion.’

Have the disciples been caught out by the banter and exchanges between Jesus and this woman?

Have they been shown that they have a compassion that is severely limited by age, sex, religion, language and ethnicity?

Is my compassion truly compassionate if it is limited by boundaries I construct like this – when I hedge it with my own prejudices and limitations?

After this witty exchange between the woman and Jesus, their puns and insider jokes about the ‘crumbs,’ Jesus is shown not to be hesitant at all. He tests this woman, and she meets the test, and – unlike the daughters of the Phoenician women in the play by Euripides – this woman’s daughter is healed and restored to a place in society that even the disciples are unwilling to extend to her.

In other words, between these two stories, Christ’s ministry moves from engaging with his fellow Jews, to reflecting God’s abundant provision for all people, Gentiles as well as Jews.

She suggests that in this encounter between Jesus and the Syrophoenician woman, a vital ‘boundary’ is crossed and broken, taking Christ out into the Gentile world.

The story of this mother and her daughter finds its context in – is sandwiched between – the two stories about feeding the crowds. All three stories involve feeding with bread. Christ’s invitation to the Eucharist needs to be opened out, from being a rite of the Church to being a banquet for the world.

Only when we break down our limitations or prejudices can Christ’s healing message be brought to a world that cries out for God’s healing, God’s mercy, God’s justice … that cries out to be called into God’s Kingdom.

In the small miniature below Jean Colombe’s painting of the story of the Syro-Phoenician woman, the Disciples, gathered like a Greek chorus, can see her but cannot see the body language and facial reaction of Christ

24 From there he set out and went away to the region of Tyre. He entered a house and did not want anyone to know he was there. Yet he could not escape notice, 25 but a woman whose little daughter had an unclean spirit immediately heard about him, and she came and bowed down at his feet. 26 Now the woman was a Gentile, of Syrophoenician origin. She begged him to cast the demon out of her daughter. 27 He said to her, ‘Let the children be fed first, for it is not fair to take the children’s food and throw it to the dogs.’ 28 But she answered him, ‘Sir, even the dogs under the table eat the children’s crumbs.’ 29 Then he said to her, ‘For saying that, you may go – the demon has left your daughter.’ 30 So she went home, found the child lying on the bed, and the demon gone. 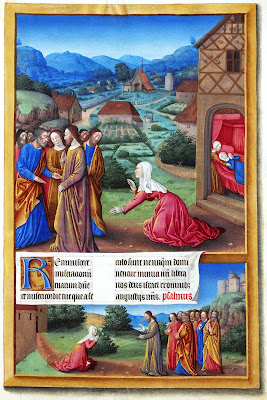 O God,
whose word is life,
and whose delight is to answer our cry:
give us faith like that of the woman
who refused to remain an outsider,
so that we too may have the wisdom to argue
and demand that our children be made whole,
through Jesus Christ.

Lord God,
the source of truth and love:
Keep us faithful to the apostles’ teaching and fellowship,
united in prayer and the breaking of bread,
and one in joy and simplicity of heart,
in Jesus Christ our Lord.

‘Whoever sows injustice will reap calamity’ (Proverbs 22: 8) … … the museum in the old courthouse in Adare, Co Limerick (Photograph: Patrick Comerford) 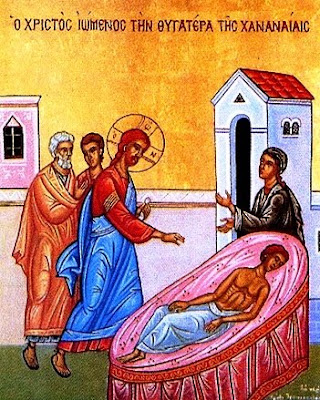 Christ in conversation with the Syrophoenician woman … a modern icon