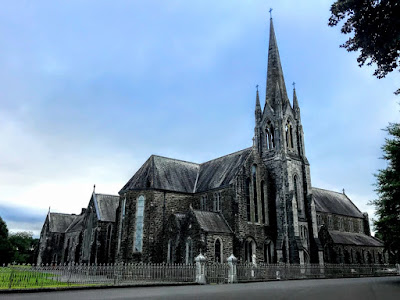 My theme this week is Benedictine (including Cistercian) foundations. My photographs this morning (1 September 2021) are from Mount Saint Joseph Abbey, near Roscrea, Co Tipperary. 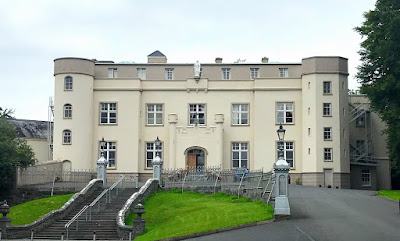 Mount Saint Joseph Abbey and the school are across the county boundary in Co Offaly. The story of Roscrea Abbey involves an interesting story of the working relationship between a papal count and two brothers, William Beardwood, the abbey architect, and Joseph Beardwood, an architect who became the Abbot of Roscrea as Don Camillus.

Moore was well known to the monks of Mount Melleray and, although he was only in his late 20s, he wanted to establish a second Cistercian monastery in Ireland. The Mount Heaton estate cost £15,000; Moore paid £10,000 of this himself, and the new community raised the remaining £5,000 with a mortgage.

The Mount Heaton Estate, about two miles east of Roscrea, took its name from the Revd Richard Heaton, who became owner in the 1630s and died there in 1666. Heaton is recognised as an early Irish botanist, and two of his botanical finds have been commemorated on Irish postage stamps. His son, Francis Heaton, changed the name of the Ballyskenagh estate to Mount Heaton by 1710.

Several monks, as well as many outside masons and labourers, worked on building the church, which was built with a nave, chancel, side aisles. The abbey church was designed by the Dublin-born architect, William Henry Beardwood (1842-1930), eldest son of William Haughton Beardwood and a brother of John Francis Beardwood.

The elder WH Beardwood was a carpenter and builder originally from Lancashire who became a Roman Catholic and moved to Ireland. His son, William Henry Beardwood, was practicing as an architect and developer in Manchester by 1875. When his business failed in Manchester, he returned to Dublin in 1880, setting up his own practice but also working for Dublin Corporation.

Mount Saint Joseph became an abbey at the end of 1886, and in August 1887, Dom Camillus Beardwood, the Bursar of Mount Melleray, was elected Abbot. Dom Camillus was born Joseph Beardwood, and he was a brother of the architect of Mount Saint Joseph. Before becoming a monk, he had trained as an architect with Sir George Moyers (1836-1916), who was Lord Mayor of Dublin in 1881.

Under the guidance of the two Beardwoods, abbot and architect, the monastery buildings were completed and a fine farmyard begun. From the beginning, farming provided the main source of income for the community and involved many of the monks.

Beardwood also designed alterations for the Mount Melleray Abbey in Cappoquin, Co Waterford, and then designed the secondary school built at Roscrea in 1902-1905.

The cost of the new college buildings was £21,000. Count Moore donated £2,600 towards the costs, and the college opened for the first 50 students in September 1905. But by then Count Moore had died on 9 January 1904. He is buried under the altar in Saint Joseph’s Chapel in the abbey church, and is commemorated by a monument in the church.

The college chapel was built in the Gothic Revival style in 1940 within the grounds of Mount Saint Joseph’s Abbey. It is joined to the school by corridor. It has a four-bay nave with triple-pile transepts, and a canted-bay. A stone plaque outside at the apse reads: ‘Dom Sub Invocatione Deiparae Immaculate Reginae Virginum Ad MCMXL.’ 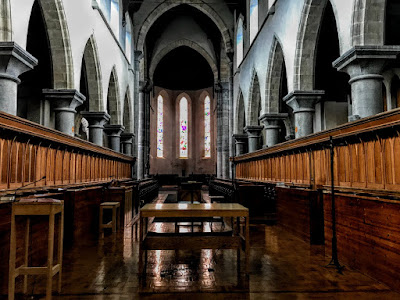 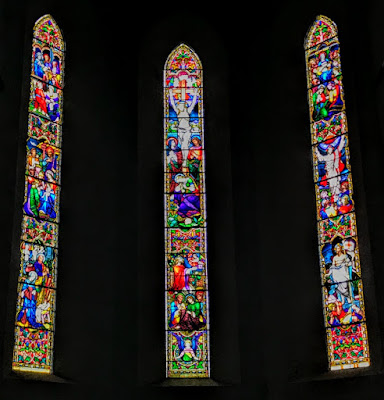 The stained glass windows in the apse in the abbey church at Roscrea Abbey (Photograph: Patrick Comerford)

The Prayer in the USPG Prayer Diary today (1 September 2021) invites us to pray:

Let us pray for people of African descent across the world. May we stand against discrimination in all its forms and recognise the pain caused by racism both in the past and present. 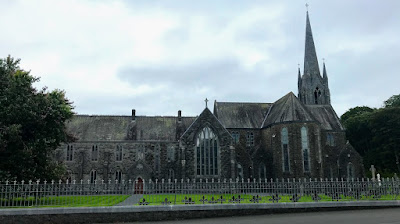 The abbey church at Roscrea Abbey, with the tower and spire added in 1938-1940 (Photograph: Patrick Comerford)