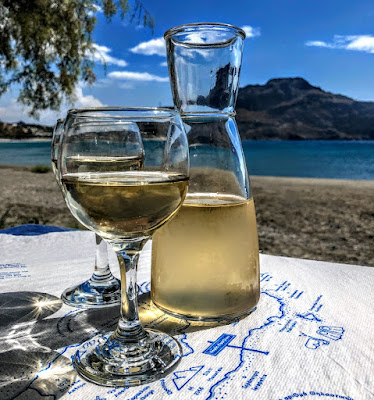 A momnent of inspiration between the mountains and the sea at Muses restaurant in Plakias (Photograph: Patrick Comerford, 2021)

Earlier this week, between spending time at the Palm Beach at Preveli and an afternoon visit to Preveli Monastery, I had lunch at Muses Restaurant, looking onto the beach at Plakias on the south coast of Crete and out to the Libyan Sea.

The mid-day sun was sparkling on the small bay below the mountains, small boats were arriving at or sailing out from the pier, there were few people in the water and the light wind was creating a cooling breeze in this small bay.

If I was tempted to be lyrical and to seek inspiration in the sea and the mountains, the menu in Muses reminded me that in Greek mythology the Muses were regarded as nine deities or nymphs of the water and the mountains.

In ancient Greek religion and mythology, the Muses (Μοῦσαι, Moûsai, or Μούσες, Múses) are the inspirational goddesses of literature, science, and the arts. They were considered the source of the knowledge embodied in the poetry, lyric songs, and myths that were related orally for centuries in ancient Greek culture.

The word has roots in phrases that refer to having things ‘in mind,’ but also to ‘mountain.’ So, the Muses were linked with creative ideas in the mind, while the centres of the cults of the Muses were found in the mountains or the hills.

The earliest known records of the Muses come from Boeotia, and the tradition persisted in Thrace that there were three original Muses. But classical writers from Homer and Hesiod to Diodorus Siculus disagreed about the number of Muses.

Diodorus wrote that Osiris first recruited the nine Muses, along with the satyrs, while passing through Aethiopia, before embarking on a tour of all Asia and Europe, teaching the arts of cultivation wherever he went.

According to Hesiod, the Nine Muses were the nine daughters of Zeus and Mnemosyne, or Memory personified. They became the personifications of knowledge and the arts, especially poetry, literature, dance and music.

The classical understanding of the Muses tripled their triad and established a set of nine goddesses, who embody the arts and inspire creation with their graces through remembered and improvised song and mime, writing, traditional music, and dance.

It was not until Hellenistic times that particular functions became associated with each Muse, but variation persisted in their names and in their attributes. They were regarded as the inspiration for every intellectual activity and were worshipped or reverenced in many places.

The menu in Muses reminded me of their names and their functions or attributes:

I might have lingered a little longer by the shore, seeking lyrical inspiration. But my this time of intellectual amusement lasted for only a moment in my mind. The bus was waiting to take me back up into the mountains to Preveli Monastery. 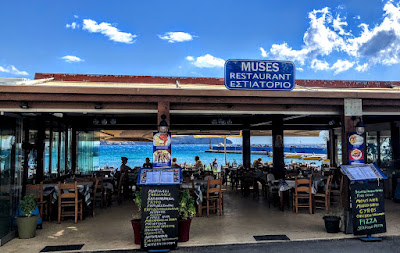 A reminder of the Muses and their inspiration at Plakias on the south coast of Crete (Photograph: Patrick Comerford, 2021)