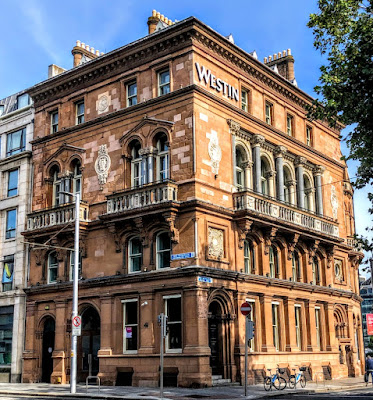 The former Provincial Bank on the corner of College Street and Westmoreland Street, Dublin, now part of the Westin Hotel (Photograph: Patrick Comerford, 2021)

When I was visiting Ennis, Co Clare, early last month, I wrote about the architecture of Bindon Street, and how it was completed in the 1860s with the building of the Provincial Bank in 1860-1864, and Saint Columba’s Church in 1869-1871.

The new bank was designed for the Provincial Bank by William George Murray (1822-1871) and built ca 1860-1864. It later became a branch of Allied Irish Bank and is now the offices of the Munster Insurance Group.

Murray was one of the leading architects in Victorian Ireland, designing major banks, insurance offices, and railway stations throughout the island, and his bank in Ennis is typical of his elegant provincial bank buildings.

However, his flourishing architectural career came to an end in court cases, allegations of fraud, financial scandals and public humiliation after he was commissioned to design the Provincial Bank’s headquarters in College Street, Dublin. Murray became the man who almost broke the bank. 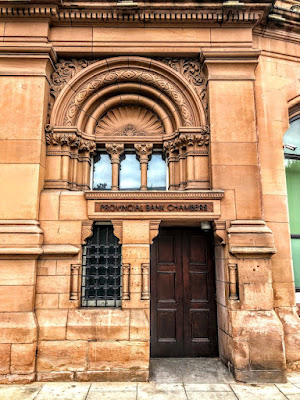 The name of the Provincial Bank can still be seen over one small, almost hidden door on College Street(Photograph: Patrick Comerford, 2021)

It is an intriguing story, and so, when I was in Dublin last week, I decided to visit the former bank on the corner of College Street and Westmoreland Street that is now part of the Westin Hotel.

The bank banked onto Fleet Street, and the building is recognisable to everybody with connections with Trinity College Dublin. I was also familiar with the building when I was working in The Irish Times. Indeed, after it had been coverted from a bank, I was having lunch in the Westin Hotel with some diplomats 20 years ago when the 9/11 crisis erupted on 11 September 2001.

The Dublin architect William George Murray was born in Dublin in 1822, the second son of William Murray, also an architect, and he trained as an architect in his father’s office. In 1845, his father took him and Abraham Denny into partnership as Murray, Son and Denny. William Murray senior died in 1849, and the two younger partners continued to practice as Murray and Denny.

Denny left the architectural profession in 1855, and William George Murray carried on a successful practice on his own. He designed some major banks and insurance offices in Dublin and designed the Royal College of Physicians in Kildare Street. He was also the architect for the Dundalk, Enniskillen and Londonderry Railway Co, designing many railway stations, for the South Dublin Union, and for the Provincial Bank of Ireland. 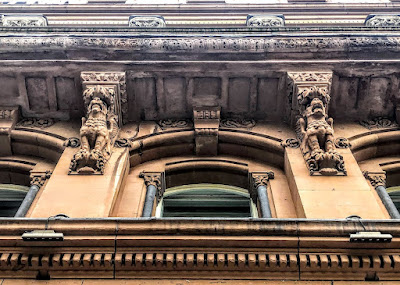 Murray and Nolan paid attention to even the smallest details (Photograph: Patrick Comerford, 2021)

When the College Street bank was completed in 1867, the cost was twice the estimate. Before the money ran out, a magnificent banking hall had been built. But there was no money left to provide the planned luxurious first-floor offices for the directors and management.

Although Murray and Nolan were acquitted by the Vice-Chancellor, to the great satisfaction of the Irish Builder, the court of appeal ruled that, because of errors and negligence on Murray’s part, an inquiry should be held to establish whether to pay the sums of money for extra work that Nolan claimed from the bank.

This dispute, involving a contractor Murray had been associated with in a large number of projects over a decade, cast a deep shadow over Murray in the last years of his life. He died at his home at Avonmore, Ballybrack, Co Dublin, 150 years ago on 6 March 1871, leaving effects of about £9,000 and two houses in Ballybrack on 5½ acres of land.

Murray’s pupils and assistants included his son, Albert Edward Murray, who inherited his practice, and Sir Thomas Drew, a leading architect at the turn of the 19th and 20th centuries, who married Murray’s sister Adelaide Anne in 1871.

Despite the disappaerance of the Provincial Bank, its name can still be seen over one small, almost hidden door on the College Street side of the building. 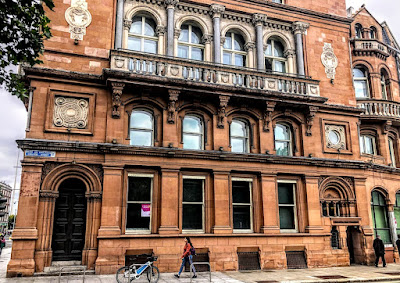