A visit to Rathdowney,
Saint Andrew’s Church,
and an interesting fountain 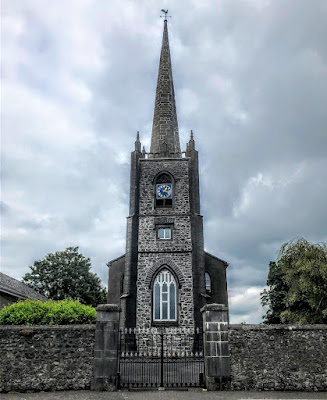 Saint Andrew’s Church, the Church of Ireland parish church in Rathdowney, was built in 1818 on the site of an earlier medieval church (Photograph: Patrick Comerford, 2021)

The summer ‘road trip’ this year also took two of us through interesting parts of Co Laois and Co Kilkenny, including the Midlands town of Rathdowney, Co Laois.

Rathdowney is about 30 km south-west of Portlaoise, in a south-west corner of Co Laois. It is squeezed between the M7 and M8 motorways, where the Abbeyleix to Templemore road crosses the road from Borris-in-Ossory to Johnstown, and has a population of about 1,300.

The story of Rathdowney dates from at least the 9th century. The ringfort that gives its name to Rathdowney, Ráth Domhnaigh, ‘Ringfort of the Church’, is mentioned three times in the Annals of the Four Masters, in the years 874, 909 and 1069. But the rath or ringfort was levelled in 1830.

Queen Victoria passed through Rathdowney during her first visit to Ireland in 1849. In a letter to her elder half-sister, Princess Feodora of Leiningen, she described Rathdowney as ‘a quaint village, surrounded by hills’ and ‘an idyllic small town.’ 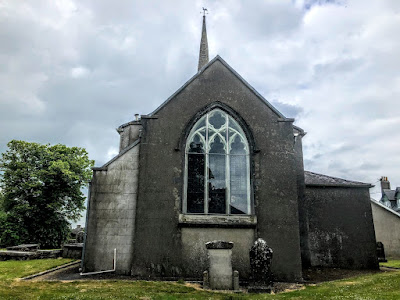 I was in Rathdowney particularly to see Saint Andrew’s Church, the Church of Ireland parish church on Church Street. The church overlooks the town’s square, and was built in 1818 on the site of an earlier medieval church.

This Georgian Gothic church is known for its tower and needle spire and for its pointed-arch windows and doors. A carved plaque on the north porch reads: ‘AD 1818/Revd Marcus Monk Vicar/William Quinn/John Patterson/ C[hurch] Wardens. Rich[ar]d Dowling Sculpt[or’ Kilkenny.’

The church was renovated in 1865, when a projecting porch and a chancel were added, and it was extended in 1990. 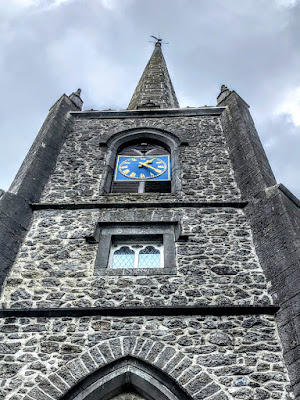 The surrounding churchyard contains 19th century headstone, most of them upright, and only few leaning and damaged. The mediaeval graveyard includes the possible site of castle-ringwork.

The Revd Richard Seymour Whiteley is the Rector of Rathdowney Union of Parishes. The former bank on Church Street has an integral carriageway, a dormer attic, and a carved heraldic plaque (Photograph: Patrick Comerford, 2021)

Across the street from Saint Andrew’s Church, the premises of PP Ryan is one of the many architecturally interesting buildings on The Square. This terraced, four-bay, two-storey former bank was built ca 1875, and has an integral carriageway, a dormer attic and a carved heraldic plaque.

Eastholme Lodge is a Tudor Gothic gate lodge on the Square dating from ca 1865. Eastholme was once the home Captain Alfred Strode Pim, MC, who was managing director of Robert Perry and Son, brewers and maltsters, for 35 years and died in 1953.

A son of Richard Pim, a Dublin stockbroker, he was educated at Cheltenham and Oxford, where he was a contemporary of the Duke of Windsor, then Prince of Wales. When World War I broke out, he joined the Royal Irish Rifles, took part in the retreat from Mons, was badly gassed at Ypres and was reported ‘killed in action’ three times.

On the wall of Eastholme Lodge, the Perry Memorial is a limestone memorial fountain. The moulded base bears an inscription: ‘In memory of Geraldine wife of Alfred William Perry, Erkindale, Rathdowney, died June 1918.’

Geraldine Perry (née Radcliff) was a daughter of William Henry (Geoffrey) Radcliff, who was born in Wilmount, Kells, Co Meath and the widow of John Wallace of Knockfinn, the neighbouring farm, who died in 1900 at the age of 29 in Dublin. She married Alfred William Perry in March 1902.

The Perry family was descended from Henry Perry, a Quaker from Shanderry, near Mountmellick, Co Laois. He was the father of five sons, many of whom became successful industrialists. Robert Perry, the eldest son, founded Rathdowney Brewery, of Perry’s Ale fame, and was the father of the Perry Brothers who founded Belmont Mills.

Another son, James Perry, was a director of the Grand Canal Company and was involved with the early development of Irish railways. With the Pims, another Quaker family, he promoted Ireland’s first railway line in Ireland, from Dublin to Kingstown (Dun Laoghaire). He was also director of the Great Southern and Western Railway and the Midland Great Western Railway.

The firm of Robert Perry & Co was founded in Clara by Henry Robert Perry in the 1850s, and was named after his father, Robert Perry, who founded Rathdowney Brewery in 1831. 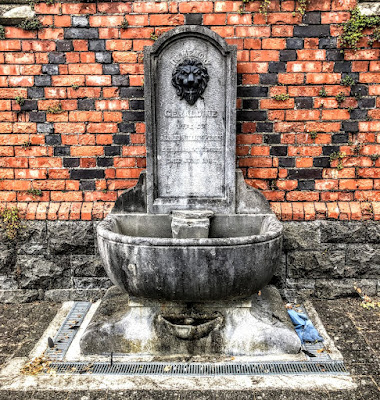 The Perry family sold Erkindale to the Thompson family in the early 1930s. But the Perry name can be seen too on the former premises of HG Perry & Sons, a terraced three-bay, two-storey house, built ca 1835, with an integral carriageway. It was renovated ca 1940, when the pub front inserted to ground floor.

In the same terrace, the former premises of Richard Williams & Sons is a terraced, four-bay two-storey house, built ca 1835. It was renovated ca 1890, when the shopfronts were inserted on the ground floor, including the projecting shopfront to the left.

The Meadow Meats plant, part of the Dawn Meats Group, stands on the site of the old Perry’s Brewery. 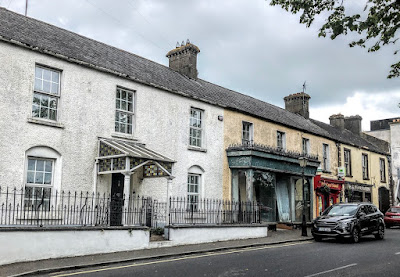