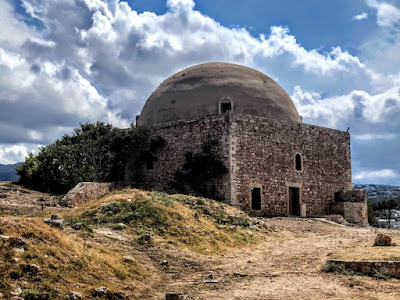 The former Venetian Cathedral of Saint Nicholas on the Fortezza in Rethymnon … the stump of the former minaret is to the right (Photograph: Patrick Comerford, 2021)

My photographs this morning (8 October 2021) are from the former Venetian Cathedral of Saint Nicholas on the Fortezza in Rethymnon. 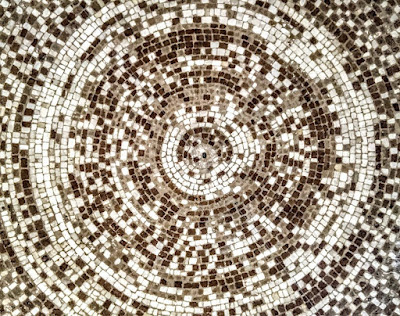 The over-sized dome has a base diameter of 11 metres and rests on eight arches (Photograph: Patrick Comerford, 2021)

The cathedral of Rethymnon was destroyed during a Turkish attack on the city by the Pasha of Algeria, Ulu Ali Reis, in 1571. A new Episcopal Palace was also built on the Fortezza in 1575, and the foundation stone for a new cathedral was laid in 1583 by the Latin Bishop of Rethymnon, Bartolomeo Chiapponi.

The new Venetian cathedral on the Fortezza was dedicated to Saint Nicholas and stands next to the former Episcopal Palace. When the cathedral was completed in 1585, Bishop Chiapponi’s successor, Bishop Giulio Carrara, refused to celebrated the Mass there, claiming conditions in the cathedral were too cramped and there were no sacred vessels there.

Perhaps these were only excuses, for Bishop Carrara did not want to move up to the Fortezza, and hoped to stay living in the Bishop’s Palace in Arampatzoglou Street (Thessaloníkis Street) in the old town.

The Venetian rettore or governor of Rethymnon, Benetto Bembo, whose official residence was opposite the new cathedral, was insistent on its use, and had alterations made to the cathedral in 1586 so that it could accommodate soldiers and residents at the Sunday Mass and so that the bishop could have no further excuses.

During the Ottoman period, from 1646, the form of the Fortezza did not change significantly, apart from minor extensions and additions. The one significant change they made was to convert Saint Nicholas Cathedral into the Sultan Ibrahim Khan, named in honour of the reigning sultan.

When the cathedral was converted into a mosque, an over-sized dome, with a base diameter of 11 metres, was added. The dome rests on eight arches, four of which are in the middle of the sides, while the other four are in the corners. The side and corner arches meet at a height of about 3 metres above the floor.

This was the first mosque in Rethymnon, and with the large dome and minaret it towered above the city.

The mosque is a square structure with spherical triangles that are formed in the corners by the arcs of the four walls. The unique architectural element that indicates the former existence of the Venetian cathedral is the angular extensions in the north and the west corners of the building.

The heptagonal mihrab or prayer niche pointing towards Mecca is on the south-east side of the mosque. It is decorated elaborately, with the semi-conical coverage decorated with relief stalactites, and with engraved circular rosettes on five of the sides.

Above is a small recessed inscription in Arabic lettering. This is an inscription from the Quran: ‘When Zachariah came to see Maryam (Mary) in the sanctuary’ (3: 37), a reference to a passage about the Virgin Mary’s conception of Christ, designed, perhaps, to appease Christians and encourage their acceptance of the Muslim presence in Rethymnon.

The many openings in the walls ensure good lighting. A heavy chain hanging from the centre of the dome held a large chandelier. The water for the fountain under the dome was stored in a tank.

The interior of the former mosque has been maintained and restored. Only the stump of the minaret survives today. The former mosque is now used for exhibitions and as a venue for music events and recordings. 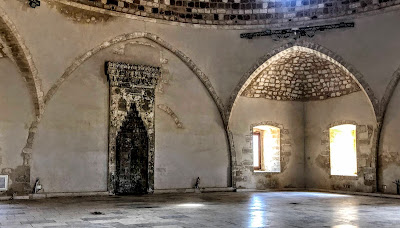 Inside the former cathedral and former mosque on the Fortezza (Photograph: Patrick Comerford, 2021)

15 But some of them said, ‘He casts out demons by Beelzebul, the ruler of the demons.’ 16 Others, to test him, kept demanding from him a sign from heaven. 17 But he knew what they were thinking and said to them, ‘Every kingdom divided against itself becomes a desert, and house falls on house. 18 If Satan also is divided against himself, how will his kingdom stand? —for you say that I cast out the demons by Beelzebul. 19 Now if I cast out the demons by Beelzebul, by whom do your exorcists cast them out? Therefore they will be your judges. 20 But if it is by the finger of God that I cast out the demons, then the kingdom of God has come to you. 21 When a strong man, fully armed, guards his castle, his property is safe. 22 But when one stronger than he attacks him and overpowers him, he takes away his armour in which he trusted and divides his plunder. 23 Whoever is not with me is against me, and whoever does not gather with me scatters. 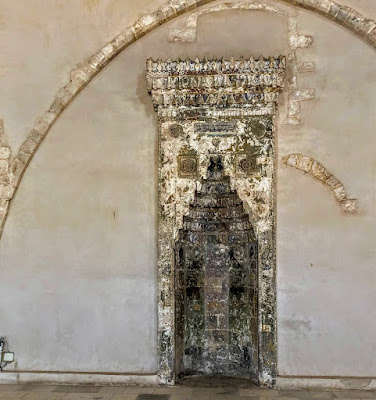 The Prayer in the USPG Prayer Diary today (8 October 2021) invites us to pray:

We pray for the work of the United Nations Permanent Forum on Indigenous Issues. May this arena facilitate the inclusion and amplification of the rights and needs of indigenous communities worldwide. 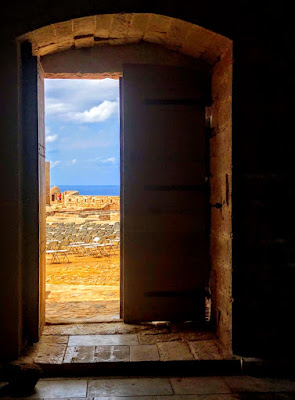 Looking out to the Fortezza from the main door of the former cathedral and mosque (Photograph: Patrick Comerford, 2021) 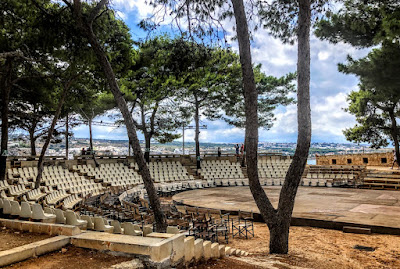