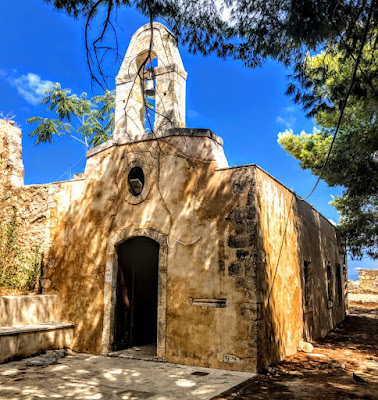 The Church of Saint Theodore Trichinás is one of two surviving small churches in the Fortezza in Rethymnon (Photograph: Patrick Comerford, 2021)

My photographs this morning (7 October 2021) are from the Church of Saint Theodore Trichinás, one of two surviving small churches in the Fortezza in Rethymnon. 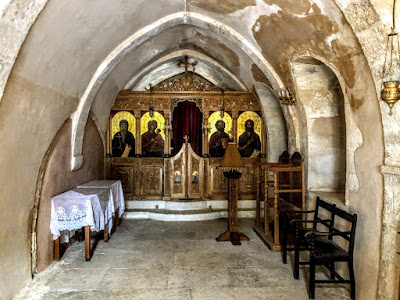 Inside the Church of Saint Theodore Trichinás on the Fortezza (Photograph: Patrick Comerford, 2021)

During the Ottoman period, from 1646, the form of the Fortezza did not change significantly, apart from minor extensions and additions, and the number of residents increased. During the German occupation of Crete in World War II, the German garrison settled in the Fortezza and turned some of the buildings into prisons and dormitories.

After World War II, the residents gradually started moving from the Fortezza and down into the town below. Today, the Fortezza is managed by the Municipality of Rethymnon. Many of the buildings have been restored, and the Fortezza remains the landmark of Rethymnon.

The Church of Saint Theodore Trichinás is a single-aisle, barrel-vaulted chapel situated between the bastions of Saint Nicholas and Saint Paul.

Saint Theodore Trichinás, a fourth/fifth century monk from Constantinople, is so-called because of his practice of wearing a hairshirt throughout his life. His feast day is on 20 April.

The church was dedicated on 21 March 1899 in the presence of the Russian commander of the allied forces in Rethymnon, General Theodor de Chiostak, during the period of the Cretan State (1898-1913). The general also renovated the bishop’s palace on Mousoúrou Street, near the cathedral, at his own expense.

The biggest bell in Saint Barbara’s Church in the old town also has the name of Theodor de Chiostak, and the other six bells have the names of six Russian regiments.

However, Saint Theodore’s Church was probably not a new church, and the building project may have involved repairing an older, original Venetian church.

Today, many couples in Rethymnon choose a simple, plain wedding in this little church in the setting of a pretty pine copse. 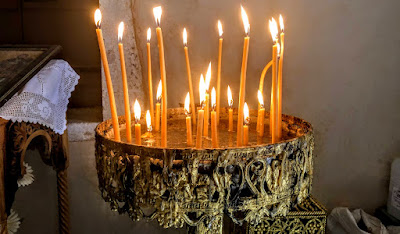 5 [And Jesus] said to them, ‘Suppose one of you has a friend, and you go to him at midnight and say to him, “Friend, lend me three loaves of bread; 6 for a friend of mine has arrived, and I have nothing to set before him.” 7 And he answers from within, “Do not bother me; the door has already been locked, and my children are with me in bed; I cannot get up and give you anything.” 8 I tell you, even though he will not get up and give him anything because he is his friend, at least because of his persistence he will get up and give him whatever he needs. 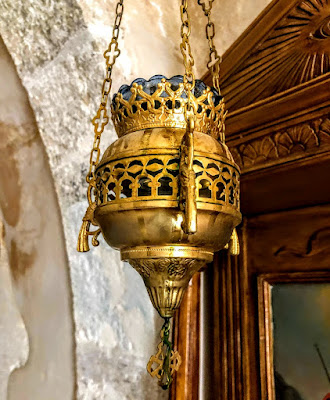 The church was dedicated in 1899 in the presence of the Russian commander in Rethymnon, General Theodor de Chiostak (Photograph: Patrick Comerford, 2021)

The Prayer in the USPG Prayer Diary today (7 October 2021) invites us to pray:

Let us pray for Lumad communities across the Philippines. May they be free from persecution and enabled to live as they wish. 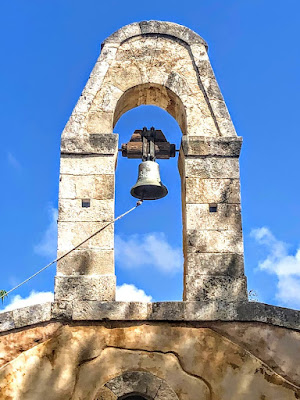 The church is a venue of choice for couples in Rethymnon seeking a simple, plain wedding (Photograph: Patrick Comerford, 2021) 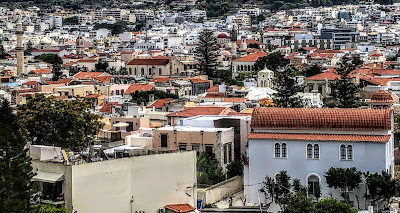 Rethymnon, with its churches and former mosques, spreads below the fortifications of the Fortezza (Photograph: Patrick Comerford, 2021)