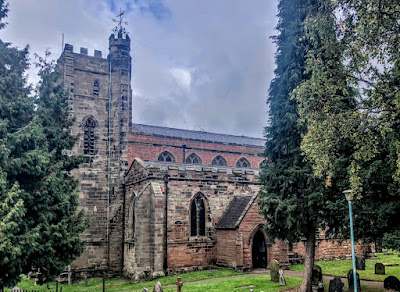 Today is the Fifth Sunday before Advent, and is also marked as Bible Sunday. Later this morning I am preaching at Morning Prayer in Castletown, Co Limerick, and preaching and presiding at the Parish Eucharist in Holy Trinity Church, Rathkeale, Co Limerick. 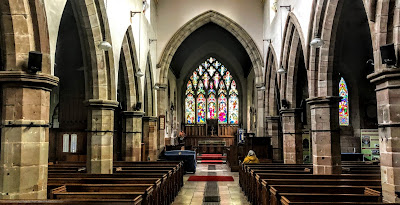 Saint Chad’s Church is in the Stowe area immediately north of the centre of Lichfield. It is a Grade II* listed building on the north side of Stowe Pool on Saint Chad’s Road.

This church dates from the 12th century although extensive restorations and additions have been made in the centuries since.

Saint Chad came to Lichfield in 669 as the first Bishop of Lichfield. He settled in a wood and lived as a hermit in a cell by the side of a spring. From there he was known to preach and baptise his converts in the spring. Saint died in 672 and was buried near his church. His bones were moved to the new Lichfield Cathedral in the year 700.

It is said the spring and churchyard are the location of Saint Chad’s cell and spring, but nothing remains of the Saxon monastery on the site.

The monastery was rebuilt in the 12th century as a stone church that included a nave, two side aisles and a chancel. The west door to the church stood where the tower now stands. The windows were set in gables and the lines of these gables and the rounded arches of the Norman windows in the south aisle are some of the oldest features still visible in the church today.

The roof was replaced in the 13th century, the gables were dispensed with and the walls built up to the level of the window heads. The Norman windows were replaced with the Early English pointed windows seen today. The south arcade of five bays with octagonal pillars is also Early English, as are the chancel and the west doorway.

The Tower at the west end was built in the 14th century to house the bells. The five-light chancel east window with cusped intersecting tracery was also built at this time and the font also dates from this time.

The Irish pilgrim Symon Semeonis visited the church in 1323 on his way to the Holy Land. He described it as ‘a most beautiful church in honour of Saint Chad, with most lofty stone towers, and splendidly adorned with pictures, sculptures, and other ecclesiastical ornaments.’

Many of the church’s assets were confiscated at the Reformation. During the English Civil War, the church was occupied by Parliamentary troops who besieged the Cathedral Close in Lichfield; the church was damaged considerably and the roof had to be rebuilt.

At this time, the red brick clerestory was added and the single overall roof was replaced by three separate roofs, including a grained roof over the nave and panelled roof in the south aisle.

A decision was taken in 1840 to demolish the north aisle and rebuild it in a Victorian Gothic style. The chancel and chancel arch were restored in 1862, and the brick clerestory extended over the chancel, a vestry was added to the north side and the porch was added to the south side.

Further restoration work took place on the windows and the stained glass in the chancel. The east end of the south aisle seen today dates from that period.

The east end of the south aisle was formed into a Lady Chapel in 1952 as a memorial to the dead of World War II.

There are four bells in the tower: three date from the 17th century and the fourth is dated 1255.

The monuments in the church include two on the south wall of the chancel with connections with Dr Samuel Johnson. One commemorates his step-daughter, Lucy Porter, who died in 1786), Dr Johnson’s stepdaughter, and another is a memorial to his mother’s maid-servant, Catherine Chambers, who died in 1767.

The statue of Saint Chad over the south porch was a gift from Lady Blomefield in 1930 in memory of her husband, Sir Thomas Blomefield.

Saint Chad’s Well is in the churchyard, to the north-west of the church. It was built over a spring where Saint Chad is said to have prayed, baptised people, and healed peoples’ ailments. It was once a popular place of pilgrimage.

When the well dried up by the early 1920s, it was lined with brick and a pump was fitted to the spring. The stone structure was demolished in the 1950s and replaced with the simple timber structure and tiled canopy.

[Jesus and his disciples] 46 [They] came to Jericho. As he and his disciples and a large crowd were leaving Jericho, Bartimaeus son of Timaeus, a blind beggar, was sitting by the roadside. 47 When he heard that it was Jesus of Nazareth, he began to shout out and say, ‘Jesus, Son of David, have mercy on me!’ 48 Many sternly ordered him to be quiet, but he cried out even more loudly, ‘Son of David, have mercy on me!’ 49 Jesus stood still and said, ‘Call him here.’ And they called the blind man, saying to him, ‘Take heart; get up, he is calling you.’ 50 So throwing off his cloak, he sprang up and came to Jesus. 51 Then Jesus said to him, ‘What do you want me to do for you?’ The blind man said to him, ‘My teacher, let me see again.’ 52 Jesus said to him, ‘Go; your faith has made you well.’ Immediately he regained his sight and followed him on the way. 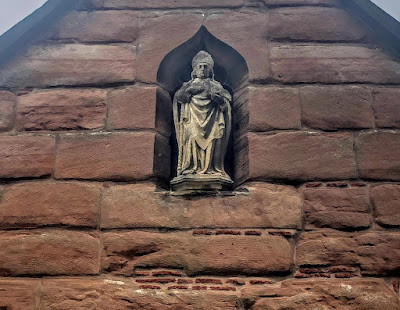 The statue of Saint Chad over the south porch (Photograph: Patrick Comerford, 2021)

The Prayer in the USPG Prayer Diary today (24 October 2021) invites us to pray:

‘I saw a great multitude that none could number,
From every nation and tribe and people and tongue.’
Lamb of God,
From your throne you reign over the peoples of the world.
on this Sunday, may we draw strength from the Bible’s story
of Babel’s division becoming a single shout of worship. 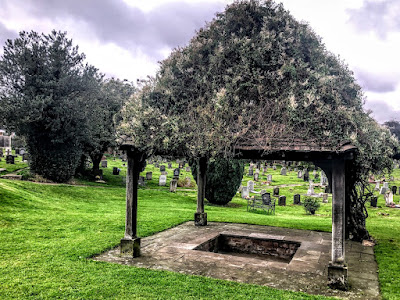 Saint Chad’s Well in the churchyard, to the north-west of the church (Photograph: Patrick Comerford, 2021) 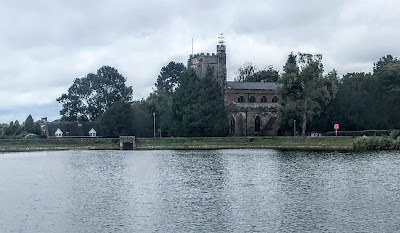 Saint Chad’s Church is on the north side of Stowe Pool in Lichfield (Photograph: Patrick Comerford)