An afternoon in Burano,
one of the world’s ten
most colourful islands 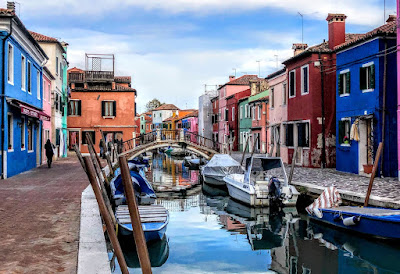 Burano is feted by many travel writers as one of the 10 most colourful places in the world (Photograph: Patrick Comerford, 2021)

Last week, after visiting the old and new Jewish cemeteries on the Lido, a walk along the long stretch of beach facing the Adriatic Sea, and lunch on the Gran Viale Santa Maria Elisabetta, two of us waited at the vaporetto station at San Nicolò, wondering where in the Lagoon the first water bus might bring us.

We found ourselves spending the afternoon, more by accident than design, on the island of Burano. This was not my first visit to Burano, nor even my second, but when I was last there three years, a heavy mist had enveloped the islands in the Lagoon, and there was little opportunity to appreciate then that Burano is feted by many travel writers as one of the 10 most colourful places in the world.

This is certainly the most colourful island in the lagoon, and known for its small, brightly painted houses in the northern Lagoon. It is 7 km from Venice and a 45-minute trip from Saint Mark’s Square by vaporetto.

Local lore says that in the past the fishermen of Burano painted their houses in distinctive colours so they could see them from long distances while they were far away fishing. Today, the colours follow a specific system, and householders need permission for the colours they use in painting their houses. 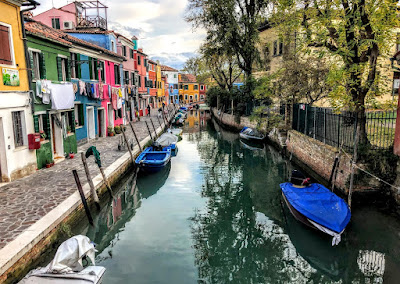 The five sestieri of Burano are separated by three canals or small rivers, linked by bridges (Photograph: Patrick Comerford, 2021)

Like Venice itself, Burano too is a collection of smaller islands, linked by canals and bridges. These five small islands have a population of about 3,000. Its size means Burano is densely populated, covered almost entirely with residential buildings but with a few small green areas.

Burano is known as ‘the island of lace’ and is home to artists such as the composer Baldassare Galuppi (1706-1785), the sculptor Remigio Barbaro (1911-2005), and the musician and composer Pino Donaggio, who wrote the score the film Don’t Look Now (1973), set in Venice.

The first site most visitors see when they arrive at Burano is Remigio Barbaro’s sculpture, Souaci Gesú, in a park near the vaporetto stop and facing the waterfront. It shows a grieving young woman expressing her pain and despair at the death of her husband at sea. It is inscribed donaci Gesu la tua pace, ‘Jesus give us your peace.’ 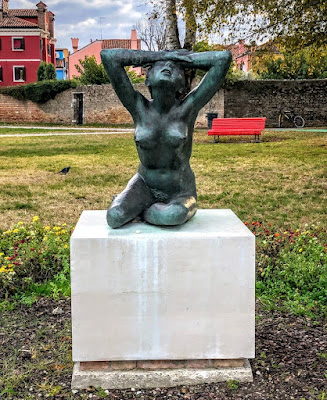 ‘Souaci Gesú,’ a sculpture by Remigio Barbera, is the first images many visitors see in Burano (Photograph: Patrick Comerford, 2021)

Burano was probably first settled by the Romans. In the 6th century, the island was settled by people from Altino. Three stories are told to explain the name of Burano. One says it was founded by the Buriana family; another says the first settlers came from the small island of Buranello, about 8 km to the south; and a third says the name Burano derives from Porta Boreana, the northern door of the city.

Although Burano became a thriving settlement at an early stage, it received none of the privileges of either Murano or Torcello and was administered from Torcello. It gained importance only when the women of Burano began making lace with needles, a skill introduced from Venetian-ruled Cyprus. When Leonardo da Vinci visited Burano in 1481, he bought a cloth for the main altar of the Duomo or cathedral in Milan.

Lace from Burano was exported throughout Europe, but this trade began to decline in the 18th century and the industry did not revive until 1872, when a school of lacemaking opened.

In from the shore, the Piazza Galuppi or Galuppi Square is the centre of the island. The square is named after the composer Baldassare Galuppi, and Remigio Barbaro’s scultpture of Galuppi is at the heart of the square. 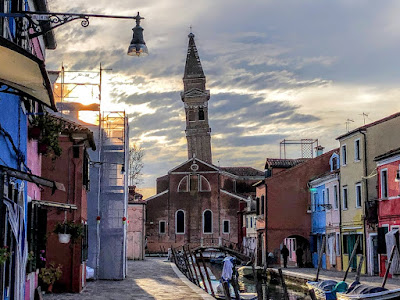 The Church of San Martino is known for its leaning campanile (Photograph: Patrick Comerford)

The square also includes the Museo del Merletto or Lace Museum, the Town Hall, and the Church of San Martino, known for the leaning campanile that can be seen from the lagoon. Inside, the church has a painting by Giambattista Tiepolo (‘The Crucifixion,’ 1727). Beside the church is the tiny Oratorio di Santa Barbara or Santa Barbara’s Chapel.

Burano is divided into five sestieri, much like Venice. They are separated by three canals or small rivers, linked by bridges and correspond to five original islands: San Martino Destro, San Martino Sinistro, San Mauro, Giucecca and Terranova. A sixth sestiere is the neighbouring island of Mazzorbo, linked by a bridge.

Burano is known for its fish dishes, especially is the risotto de gò, made with rice and gò, a fish typical of the lagoon and known in English as Goby. Many of the fish restaurants maintain the traditions of the old trattoria buranella or taverna of Burano.

But the island also has several pizzerias, shops, bars, and ice cream vendors, as well as pastry shops offering the traditional Burano cookies, including the Bussolà and the Esse. 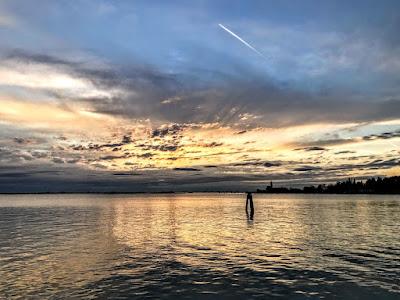 Sunset at Burano before returning to Venice (Photograph: Patrick Comerford)