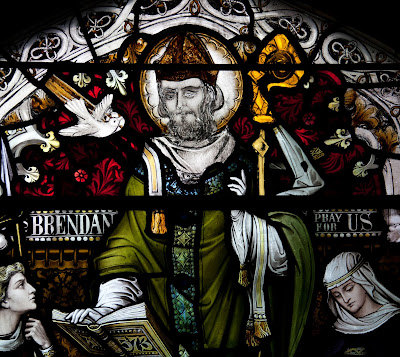 The Season of Advent began yesterday (Sunday 28 November 2021), and it was a busy day, concluding with the Advent Procession of Service of Light in Saint Mary’s Cathedral, Limerick.

Before a busy day and a busy week begins, I am taking some time early this morning for prayer, reflection and reading.

Saint Brendan of Birr as a friend and disciple of Saint Columba, and was one of the 12 students who studied under Saint Finian at Clonard and became known as the Twelve Apostles of Ireland.

At an early age, Brendan became a pupil in Saint Finian’s monastic school at Clonard Abbey, once said to have had up to 3,000 students. At Clonard, he became a friend and companion of Saint Ciarán of Saigir and Saint Brendan of Clonfert.

He founded the monastery at Birr in Co Offaly ca 540, and became its abbot. Early Irish writings depict him as a man of generous hospitality with a reputation for sanctity and spirituality who was an intuitive judge of character.

Saint Brenan attended the synod of Meltown, when Saint Columba was tried for his role in the Battle of Cúl Dreimhne. Saint Brendan spoke on behalf of Saint Columba, and the synod decided to sentence Columba to exile rather to excommunication.

The friendship between Brenan and Columba resulted in important links between Birr and the Columban foundations. It is said that Saint Columba had a vision of Saint Brendan’s soul being carried away by angels after his death.

In the late 12th century, Giraldus Cambrensis referred to the ‘Birr Stone’ as umbilicus Hiberniae, the navel of Ireland. The stone is a block of limestone around 250 million years old, and was probably part of a megalithic monument. It is said to have marked a meeting place of the Fianna, and was taken from Birr in 1828 and was used as a Mass rock, but returned to Birr in 1974. 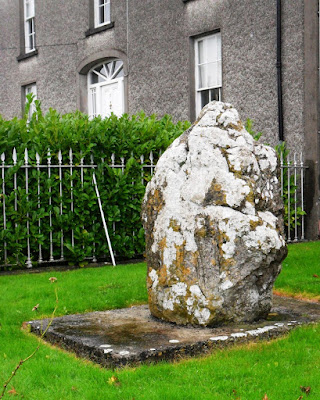 5 When he [Jesus] entered Capernaum, a centurion came to him, appealing to him 6 and saying, ‘Lord, my servant is lying at home paralysed, in terrible distress.’ 7 And he said to him, ‘I will come and cure him.’ 8 The centurion answered, ‘Lord, I am not worthy to have you come under my roof; but only speak the word, and my servant will be healed. 9 For I also am a man under authority, with soldiers under me; and I say to one, “Go”, and he goes, and to another, “Come”, and he comes, and to my slave, “Do this”, and the slave does it.’ 10 When Jesus heard him, he was amazed and said to those who followed him, ‘Truly I tell you, in no one in Israel have I found such faith. 11 I tell you, many will come from east and west and will eat with Abraham and Isaac and Jacob in the kingdom of heaven, 12 while the heirs of the kingdom will be thrown into the outer darkness, where there will be weeping and gnashing of teeth.’ 13 And to the centurion Jesus said, ‘Go; let it be done for you according to your faith.’ And the servant was healed in that hour.

The Prayer in the USPG Prayer Diary today (29 November 2021) invites us to pray:

Let us pray for the users of Hong Kong Sheng Kung Hui’s social and educational services; may they, through the work of the Church, come to know and experience God’s redemptive love for the humankind.