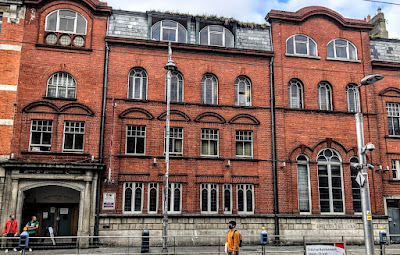 Today, in the calendars of many churches in the Anglican Communion, is All Souls’ Day (2 November). 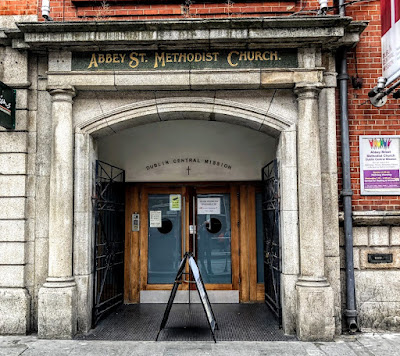 In the 1980s I also organised some meetings of Christian CND at Dublin Central Mission, and some years ago I preached in Abbey Street as part of a series of Holy Week services organised by three local churches – Abbey Street Methodist Church, Saint George’s Church (Church of Ireland), Cathal Brugha Street, and Abbey Presbyterian Church, Parnell Square.

All three churches are off O’Connell Street, the main thoroughfare in Dublin’s north inner city, and Abbey Street Methodist Church is the only surviving Methodist church in the city centre or between the canals. The church is just 75 metres east of O’Connell Street and beside a Luas Red Line stop.

John Wesley visited Ireland on 21 occasions between 1747 and 1789. On the first of these visits, he landed at George’s Quay on 9 August 1747, and preached that Sunday afternoon at Evening Prayer in Saint Mary’s Church to ‘as gay and senseless a congregation as ever I saw.’ The Archbishop of Dublin strongly disapproved and Wesley did not preach again in a parish church in Dublin.

Wesley failed to obtain a freehold site for a building in Dublin and so took a 99-year lease on a site in Whitefriar Street, where the first Methodist chapel in Ireland was built and opened in 1752.

Later, the Methodists who worshipped in Whitefriar Street found a new site on the south side of Saint Stephen's Green, where they built a chapel designed by Isaac Farrell. The façade was dominated by a handsome Ionic portico. The building opened for worship in 1843, four years after the centenary of Wesley’s commencement of Methodist work, and so was called the Methodist Centenary Church. Wesley College was built behind it.

The Methodist Centenary Church itself was burnt down in the 1960s, and the congregation moved to Christ Church, Leeson Park, while Wesley College moved to suburban Ballinteer.

As for Abbey Street Methodist Church, it has a shared history with the development of Lower Abbey Street and is an integral part of its 19th century streetscape.

The first Methodist gathering on Abbey Street took place in 1747. The present church site dates from 1821, shortly after Lower Abbey Street was realigned by the Wide Streets Commissioners. The church building was remodelled and rebuilt in its present form by GF Beckett in 1901, retaining some of its original 19th-century plinth course, and reopened in 1902.

The coloured-glass leaded windows, with a tripartite arrangement on the ground floor of the west breakfront, are the only ecclesiastical features of this terraced, nine-bay, three-storey building with attic.

The recessed entrance porch at the west breakfront has a granite Doric surround that includes a segmental-arch opening with an architrave surround flanked by a pair of engaged Doric columns on plinths supporting a stepped entablature that has mosaic tiling in the frieze stating, ‘Abbey St. Methodist Church.’

The church survived bombardment during the 1916 Rising. Over time, it has been extended and renovated to house the growing needs of the congregation and the inner-city mission work of the Methodist Church.

Abbey Street became the city centre base for the Dublin Central Mission in the 1960s. The Minor Hall was damaged in the 1972 Talbot Street bomb.

Today, Abbey Street Methodist Church has a multi-ethnic, all-age congregation with members from over 20 countries.

DCM has four areas of ministry in five locations across Dublin, all with a mission to Welcome, Serve and Support those who need it most. DCM facilitates and runs a number of social action projects, and also cares for older people, operating a care and nursing home and two sheltered Housing complexes. 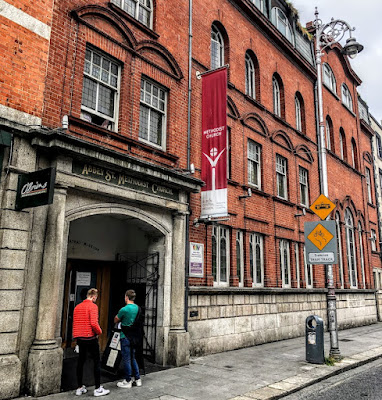 The Prayer in the USPG Prayer Diary today (2 November 2021, All Souls’ Day) invites us to pray:

We pray for all those who have gone before us. May we cherish our memories of family and friends who are no longer with us. 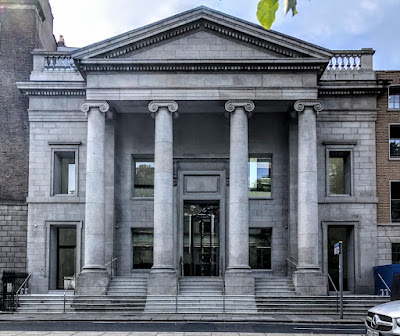 The former Methodist Centenary Church on the south side of Saint Stephen’s Green (Photograph: Patrick Comerford, 2021) 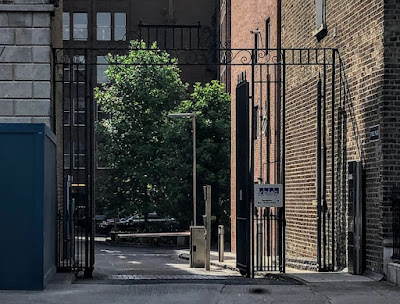