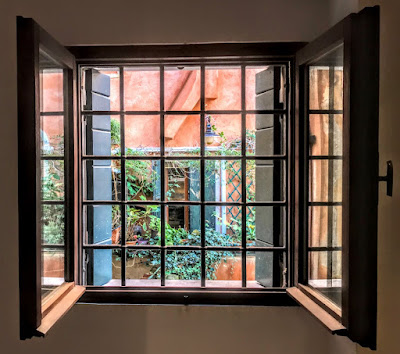 A window out onto life in Venice in the Jewish Museum (Photograph: Patrick Comerford)

I am back in Ireland after this week’s city break in Venice. I spent a few days at the Hotel San Cassiano in the Ca’ Favretto in the Santa Croce district just a few minutes’ walk from Rialto, celebrating some important family birthdays and anniversaries.

Before today gets busy back in the Rectory in Askeaton, I am taking a little time this morning for prayer, reflection and reading. Each morning in the time in the Church Calendar known as Ordinary Time, I am reflecting in these ways:

As part of my reflections and this prayer diary this week, my photographs were from the ghetto in Venice, looking at each of the five historic synagogues in the Ghetto in turn each morning this week.

My photographs this morning (13 November 2021) are from the Jewish Museum of Venice, although it has been temporarily closed since earlier this month (2 November). 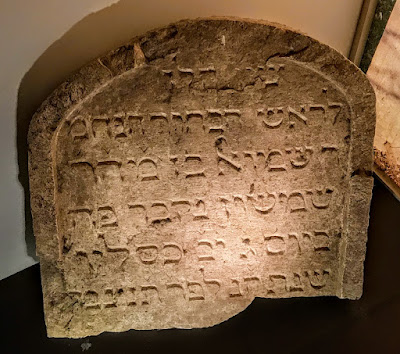 The 14th century gravestone of Shemu'el son of Shimshon who died in 1389 in the Jewish Museum of Venice (Photograph: Patrick Comerford)

The Jewish Museum of Venice, which I have visited on previous occasions, is an architectural complex in the Ghetto that includes some of the most important synagogues and ancient Jewish dwellings in Venice, built from the start of the Renaissance. It includes Venice’s oldest synagogue – the German Synagogue, built in 1528 – along with the Canton Synagogue, built in 1532, both included in this prayer diary earlier this week.

The Spanish and Levantine synagogues, which were included too in my prayer diary this week, were also built in the mid-16th century. But they are outside the Campo del Ghetto Nuovo, or ‘New Ghetto,’ a misnomer, as it is actually older than the Ghetto Vecchio or Old Ghetto.

The Jewish Museum of Venice was founded in 1953, in the Campo del Ghetto Nuovo, between the most ancient Venetian synagogues. The displays in the museum tell the stories of the Jewish tradition, still living in Venice.

The museum exhibits a wide selection of ancient books and manuscripts and objects used in the most important moments of the Jewish life. The new exhibition area of the Museum describes the history of the Jews in Venice.

The museum is built in two areas, the first devoted to the cycle of Jewish festivities and to objects used for liturgy, the second – planned with a conscious educational approach – deals with the history of Venetian Jews through images and objects.

The first room of the museum is dedicated to the cycle of the most important Jewish festivities with many ritual objects. including shofar, Channukkioth chandeliers, a Meghillat Ester, a Menorah, and a Seder plate for Pesach or Passover, and Torah crowns and scrolls.

The second room has a rich collection of precious textiles, including Torah mantles, and parokhoth or curtains to cover the doors of Aron haKodesh or Holy Ark, some dating from the early 17th century.

A section of the museum brings visitors on an artistic and cultural journey following the stages of Jewish life in Venice, with a selection of documents and liturgical objects. This section ends with the story of World War II, the Shoah or Holocaust, and the beginning of a new Jewish life in Venice with the reopening of the synagogues on 3 May 1945. 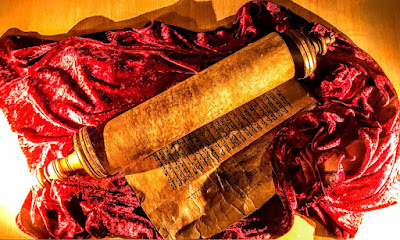 A Megillah or Scrol of Esther in the Jewish Museum in Venice (Photograph: Patrick Comerford) 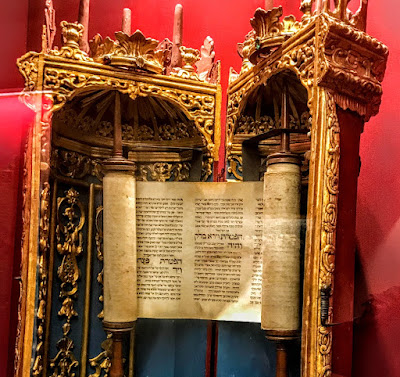 The Prayer in the USPG Prayer Diary today (13 November 2021) invites us to pray:

Let us pray for peacemakers around the world. May we seek mediation, reconciliation and friendship in all situations.

‘O earth, cover not my blood’ (Job 16: 18) … words from Job express the cry of victims of the Holocaust (Photograph: Patrick Comerford) 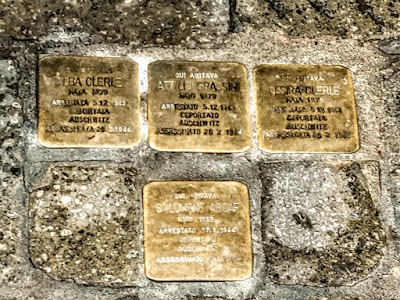