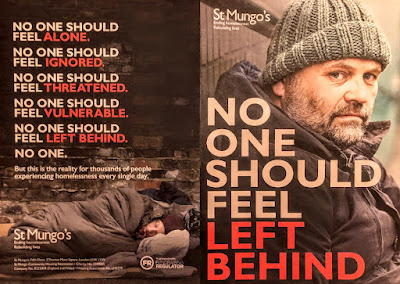 This is the Season of Advent. Before a busy day begins, I am taking some time early this morning (2 December 2021) for prayer, reflection and reading.

Many of the saints commemorated in Church calendars today seem to be obscure in one way or another, or are largely forgotten. However, one saint who is the fore of my mind this morning is Saint Mungo, if only because the issue of homelessness is relevant to the Gospel reading this morning for the Eucharist in the lectionary of the Church of Ireland, and because I have received a number of leaflets in the Church Times and other publications reminding of the work of the homelessness campaign and community, St Mungo’s.

St Mungo’s, now based at St Mungo’s at Thomas More Square, London, dates from 1969, when a group of volunteers decided to do something to help homeless people.

Today, St Mungo’s helps thousands of people across London and the south of England. But it dates from 1969, when a group of people decided to do something to help the people they saw sleeping rough on the streets of London.

They started by going out, talking to people, offering food and what assistance they could. But why Saint Mungo?

Charles Fraser, the former Chief Executive, told The Guardian in 2009 that one of the group’s main volunteers was from Glasgow, whose patron saint is Saint Kentigern. Saint Kentigern is patron saint of the city and of wandering Celts – and is also known as Saint Mungo. The group thought ‘a Christian saint’s name would stop police hassling workers on soup runs – they thought they were reverends.’

Another account says St Mungo’s began as a splinter group from the Simon Community, founded by Anton Wallich-Clifford, due to differences on allowing drinking on the premises. The new group was offered the short lease on a house in Home Road, Wandsworth, about to be demolished, although St Mungo’s was not yet a registered charity.

Jim Horne rejected the idea the house should be called the Home Road Hostel and pressed for the name Saint Mungo’s. Being Scottish, he believed Glasgow Cathedral might be persuaded to make an ample donation if it was named after the patron saint of Glasgow.

In the years since, St Mungo’s has continued working to end homelessness and has been on the frontline of delivering services to keep people healthy, housed and hopeful.

Each night across England, more than 4,000 people sleep rough on the streets: people in need of shelter, support and the opportunity to rebuild their lives.

Homelessness is not inevitable. Charities and organisation working in area of homelessness need the support of people like you and me to carry on their vital work into the future so homelessness can end and so that people are helped to truly fulfil their hopes and ambitions.

As for Saint Kentigern or Saint Mungo, who is revered as the founder and patron saint of the city of Glasgow, he died on 13 January 614, and so his feast day is not for another six weeks, on 13 January.

[Jesus said:] 21 ‘Not everyone who says to me, “Lord, Lord”, will enter the kingdom of heaven, but only one who does the will of my Father in heaven.

The Prayer in the USPG Prayer Diary today (2 December 2021) invites us to pray:

We pray that the clergy of the Church may continue to be faithful servants of Christ.