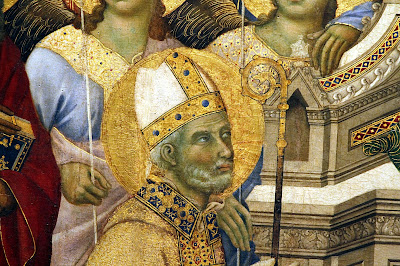 This is the Season of Advent. Before a busy day begins, I am taking some time early this morning (1 December 2021) for prayer, reflection and reading.

Saint Ansanus (Sant’Ansano), who is recalled today (1 December), is the patron saint of Siena. He is called ‘The Baptiser’ or ‘The Apostle of Siena,’ and died in the year 304.

Legend says he was born into the noble Ancian family of Rome in the third century. When he was still a child, Ansanus was secretly baptised by his nurse Maxima (Saint Maxima of Rome) and was secretly brought up as a Christian.

Ansanus openly declared his Christian faith during the persecutions of Diocletian, when he was 19. Tradition says he preached the Gospel in Bagnoregio (Bagnorea) and that the Church of Santa Maria delle Carceri outside the Alban Gate was been built above the prison where he was held.

Tradition says his own father denounced Ansanus to the authorities. Ansanus and Maxima were scourged; Maxima died, but Ansanus survived. He was then thrown into a pot of boiling oil, survived once more, and was then taken to Siena as a prisoner. There he preached Christianity and make many converts to Christianity. He was decapitated on the orders of the Emperor Diocletian.

Saint Ansanus is venerated as one of the patron saints of Siena. He is depicted in the Maestà of Duccio, an altarpiece composed of many individual paintings commissioned by the city of Siena in 1308 from the artist Duccio di Buoninsegna and his most famous work, completed in 1308-1311.

The front panels make up a large enthroned Madonna and Child with saints and angels, including Saint Ansanus, and a predella of the Childhood of Christ with prophets. The reverse has the rest of a combined cycle of the Life of the Virgin and the Life of Christ in a total of 43 small scenes.

The base of the panel has an inscription that reads, ‘Holy Mother of God, be thou the cause of peace for Siena and life to Duccio because he painted thee thus.’ Duccio’s Maestà set Italian painting on a course leading away from the styles of Byzantine art to more direct presentations of reality. However, several panels are now dispersed or lost.

29 After Jesus had left that place, he passed along the Sea of Galilee, and he went up the mountain, where he sat down. 30 Great crowds came to him, bringing with them the lame, the maimed, the blind, the mute, and many others. They put them at his feet, and he cured them, 31 so that the crowd was amazed when they saw the mute speaking, the maimed whole, the lame walking, and the blind seeing. And they praised the God of Israel.

32 Then Jesus called his disciples to him and said, ‘I have compassion for the crowd, because they have been with me now for three days and have nothing to eat; and I do not want to send them away hungry, for they might faint on the way.’ 33 The disciples said to him, ‘Where are we to get enough bread in the desert to feed so great a crowd?’ 34 Jesus asked them, ‘How many loaves have you?’ They said, ‘Seven, and a few small fish.’ 35 Then ordering the crowd to sit down on the ground, 36 he took the seven loaves and the fish; and after giving thanks he broke them and gave them to the disciples, and the disciples gave them to the crowds. 37 And all of them ate and were filled; and they took up the broken pieces left over, seven baskets full.

The Prayer in the USPG Prayer Diary today (1 December 2021, World AIDS Day) invites us to pray:

We pray for the medical professionals and researchers combating diseases and guarding our health tirelessly.

The Maestà, or Maestà of Duccio … Saint Anansus of Siena is in the bottom row, second from the left