With the Saints through Christmas (2):
27 December 2021, Saint John the Evangelist 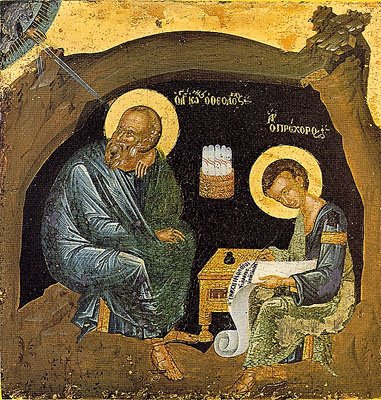 Our Christmas celebrations are not over yet. Indeed, the season does not end even after the ’12 Days of Christmas.’ This is a season that continues for 40 days until the Feast of the Presentation or Candlemas (2 February).

After a day resting in Dublin I am returning to Askeaton this morning for a Baptism in Saint Mary’s Church later this afternoon. But, before this day begins, I am taking some time early this morning for prayer, reflection and reading.

Saint Stephen’s Day yesterday [26 December], Holy Innocents’ Day tomorrow (28 December), and the commemoration of Thomas à Beckett on 29 December are reminders that Christmas, far from being surrounded by sanitised images of the crib, angels and wise men, is followed by martyrdom and violence. Close on the joy of Christmas comes the cost of following Christ. A popular expression, derived from William Penn, says: ‘No Cross, No Crown.’

Saint John the Evangelist, the author of the Fourth Gospel, also known as Saint John the Divine and as the beloved Disciple, is celebrated in the Calendar of the Church today [27 December].

Saint John has a prominent place throughout the Gospels. He is: 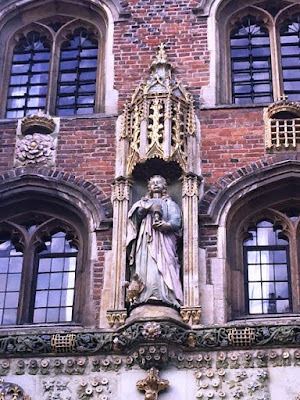 After the Ascension, Saint John travels to Samaria and is thrown into prison with Saint Peter (Acts 4: 3). He also travels to Ephesus and is credited with founding the church there.

According to ancient tradition, during the reign of the Emperor Domitian Saint John was once given a cup of poisoned wine, but he blessed the cup and the poison rose out of the cup in the form of a serpent. Saint John then drank the wine with no ill effect.

A chalice with a serpent signifying the powerless poison is one of his symbols, so that the image of Saint John with the poisoned chalice is still seen above the main gate of Saint John’s College, Cambridge.

There is a custom in some places of blessing wine on this day and drinking a toast to the love of God and to the saint.

Tradition also holds that Emperor Domitian had Saint John beaten and thrown into a pot of boiling oil but that he emerged unscathed from each of his trials. The emperor then banished Saint John to the island of Patmos, where he wrote the Book of Revelation. He is also identified with the author of the three Johannine Epistles in the New Testament.

Jerome, in his commentary on Chapter 6 of the Epistle to the Galatians (Jerome, Comm. in ep. ad. Gal., 6, 10), tells the well-loved story that Saint John the Evangelist continued preaching in Ephesus even when he was in his 90s.

Saint John was so enfeebled with old age that the people had to carry him into the Church in Ephesus on a stretcher. And when he was no longer able to preach or deliver a long discourse, his custom was to lean up on one elbow on every occasion and say simply: ‘Little children, love one another.” This continued on, even when the ageing John was on his death-bed.

Then he would lie back down and his friends would carry him back out. Every week in Ephesus, the same thing happened, again and again. And every week it was the same short sermon, exactly the same message: ‘Little children, love one another.’

He is said to have died in Ephesus when he was about 100 years old.

Traditionally, Saint John is intimately associated with the Christmas celebration, and the prologue to Saint John’s Gospel (John 1: 1-14) is one of the traditional Gospel readings for Christmas Day.

For Saint John, there is no annunciation, no nativity, no crib in Bethlehem, no shepherds or wise men, no little stories to allow us to be sentimental and to muse. He is sharp, direct and gets to the point: ‘In the beginning … ’

1 In the beginning was the Word,
and the Word was with God,
and the Word was God.
2 He was in the beginning with God.
3 All things came into being through him,
and without him not one thing came into being.
What has come into being 4 in him was life,
and the life was the light of all people.
5 The light shines in the darkness,
and the darkness did not overcome it.
6 There was a man sent from God, whose name was John. 7 He came as a witness to testify to the light, so that all might believe through him. 8 He himself was not the light, but he came to testify to the light. 9 The true light, which enlightens everyone, was coming into the world.
10 He was in the world,
and the world came into being through him;
yet the world did not know him.
11 He came to what was his own,
and his own people did not accept him.
12 But to all who received him, who believed in his name, he gave power to become children of God, 13 who were born, not of blood or of the will of the flesh or of the will of man, but of God.
14 And the Word became flesh
and lived among us,
and we have seen his glory,
the glory as of a father’s only son,
full of grace and truth.

As Saint John is sometimes called the Apostle of Love, his message is truly appropriate in the Christmas season. In art, Saint John the Evangelist is frequently represented as an Eagle. He is also shown with a chalice from which a serpent is rising in reference to the attempted poisoning by Domitian. 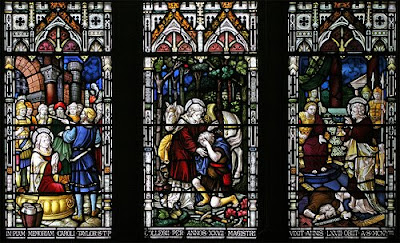 Scenes from the life of Saint John the Evangelist in the chapel of Saint John’s College, Cambridge: on the left, he survives being thrown into boiling oil outside the Latin gate (‘ante portam Latinam’); on the right, he survives drinking from a poisoned chalice

The Prayer in the USPG Prayer Diary today (27 December 2021, Saint John the Evangelist) invites us to pray:

Today we celebrate the feast of Saint John the Apostle and Evangelist. May we strive to be ‘pillars of the Church’ as he was. 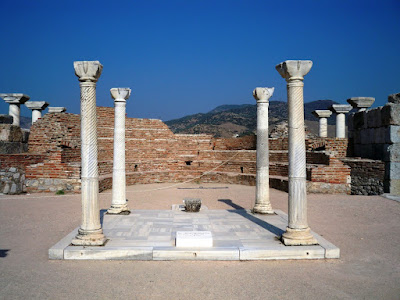 The site of Saint John’s tomb in Aysoluk, near Ephesus is marked by a marble plaque and four Byzantine pillars (Photograph: Patrick Comerford)