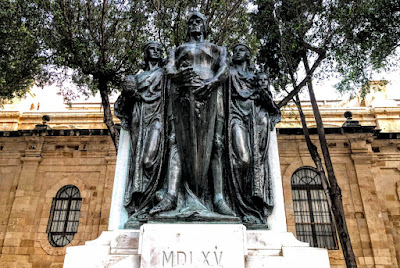 The Great Siege Monument in Valletta is the work of the sculptor Antonio Sciortino and faces the Courts of Justice on Republic Street (Photograph: Patrick Comerford, 2022)

The Great Siege Monument in Valletta is in Great Siege Square at the side of Saint John’s Co-Cathedral and facing the Courts of Justice on Republic Street, the fashionable street running through the heart of the Maltese capital.

This monument, also known as the Monument to the Fallen of the Great Siege, is the work of the celebrated Maltese sculptor, Antonio Sciortino (1879-1945), and was inaugurated in 1927 to commemorate the victims of the Great Siege in 1565, when Malta was besieged by the Ottoman Turks.

The three bronze figures on a granite plinth in Sciortino’s sculpture represent Faith, Civilisation and Fortitude or Valour.

The male figure in the centre is described as Fortitude or Valour, and he is portrayed bare-chested and wearing a three-pointed crown and some armour, while holding a sword and a shield. There is a female figure on either side, with Faith on the left and Civilisation on the right. Faith holds a papal tiara, while Civilisation holds a mask of Minerva, the Roman goddess of Wisdom.

The monument originally faced the Auberge d’Auvergne, one of the hostels of the Order of Saint John or Knights of Malta. That building was replaced by the in the 1960s after the original building had been severely damaged in World War II.

Since October 2017, this monument has also become a monument to the murdered Maltese journalist, Daphne Caruana Galizia, who in her own way has come to symbolise Faith, Civilisation and Valour in Malta.

Daphne Anne Caruana Galizia (1964-2017) was a Maltese writer, journalist, blogger and anti-corruption activist, who reported on political events in Malta. In particular, she focused on investigative journalism, reporting on government corruption, nepotism, patronage, allegations of money laundering, links between Malta’ online gambling industry and organised crime, Malta’s citizenship-by-investment scheme, and payments from the government of Azerbaijan.

Caruana Galizia’s national and international reputation was built on her regular reporting of misconduct by Maltese politicians and politically exposed persons.

She continued to publish articles for decades, despite intimidation and threats, libel suits and other lawsuits. She was arrested by the Malta Police Force on two occasions. Her investigations were published on her personal blog, Running Commentary, which she set up in 2008.

She was a regular columnist with The Sunday Times of Malta and later The Malta Independent. Her blog consisted of investigative reporting and commentary, some of which was regarded as personal attacks on individuals, leading to a series of legal battles. In 2016 and 2017, she revealed controversially sensitive information and allegations relating to a number of Maltese politicians and the Panama Papers scandal.

She was murdered close to her home on 16 October 2017, when a car bomb was detonated inside her car. Her murder attracted widespread local and international condemnation. Three men were arrested in connection with the attack in December 2017. Yorgen Fenech, the owner of the Dubai-based company 17 Black, was arrested by police on his yacht on 20 November 2019 in connection with her murder. 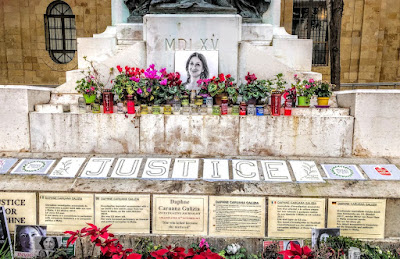 The base of the monument has become a tribute to the murdered journalist Daphne Caruana Galizia (Photograph: Patrick Comerford, 2022)

An international consortium of 45 journalists in April 2018 published The Daphne Project, a collaboration to complete her investigative work. The GUE/NGL Award for Journalists, Whistleblowers and Defenders of the Right to Information was established in 2018 in her honour.

The base of the Great Siege Monument in the heart of Valletta has countless photographs of this brave and slain investigative journalist, with quotations from her work, floral tributes and a number of small lights and candles that are kept lighting throughout the day and night.

For a while, the tributes were removed on a daily basis by government employees. However, a court decision in 2020 found that the orders by the then Minister for Justice, Owen Bonnici, to repeatedly clear the memorial were a violation of protesters’ human rights of freedom of expression. 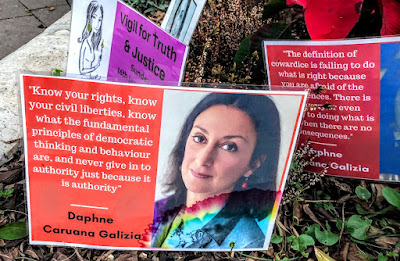 The tributes to Daphne Caruana Galizia are now protected by a court order (Photograph: Patrick Comerford, 2022)