In search of a lost synagogue
in the ‘Silent City’ of Mdina,
the mediaeval capital of Malta 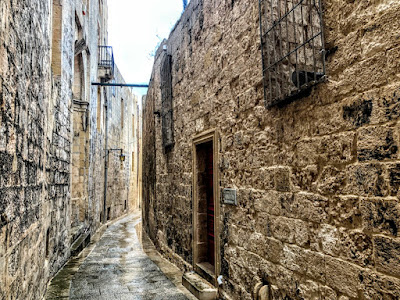 Carmel Street is a narrow street the heart of the former Jewish quarter of Mdina … the Carmelite cloisters on the left and the ‘Old Jewish Silk Market’ on the right (Photograph: Patrick Comerford, 2022)

Mdina was the capital of Malta for hundreds of years. At one time, about one-third of the inhabitants of the city were Jewish merchants and their families. So, when I visited Mdina on a rain-dampened morning this week, I went in search of the former Jewish quarter and the site of the mediaeval synagogue during.

Mdina is known as the ‘Silent City,’ and with a population of about 300 residents, a hush descends on the walled city when darkness begins to fall on the Dingli Plateau and the last day trippers and tourists leave.

But Mdina dates back to antiquity. The walls have been compared to the walls of Jerusalem, and the Roman town of Melita included present-day Mdina and parts of the neighbouring town of Rabat.

In time, the Arabs captured Malta from the Byzantine Empire in 870, and rebuilt Roman Melita, dividing it between Mdina and Rabat.

The Arabs were followed by the Normans from Sicily in the 12th century, and they in turn extended and reinforced the walls of Mdina.

The Normans were succeeded by the Hohenstaufen dynasty in 1194, and Malta then passed to the Spanish Kingdom of Aragon in 1282. Spanish-ruled mediaeval Mdina had a thriving Jewish community. But when the Spanish Inquisition ordered the expulsion of Jews from all Spanish territories in 1492, life became precarious for the Jews of Mdina. 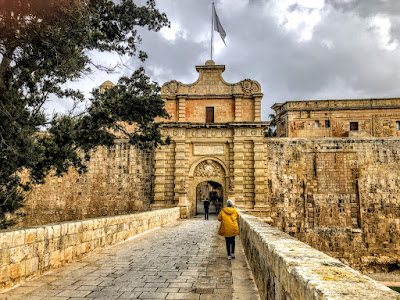 The Main Gate of Mdina … the Spanish Inquisition was housed nearby (Photograph: Patrick Comerford, 2022)

The main gate was built in the baroque style as recently as 1724, on the orders of the Grand Master Antonio Monoel de Vilhena, and was designed by the engineer Charles Francois de Mondion.

The Spanish Inquisition was located behind the main gate, and many Jews who became conversos but continued to practice their Judaism secretly were tortured in the cellar.

When the Spanish conceded the Maltese islands to the Order of Saint John or Knights of Malta in 1530, the Jews of Mdina had long disappeared. The knights moved the capital from Mdina to the newly-built town of Valletta, although the old families of the Maltese nobility remained in Mdina. 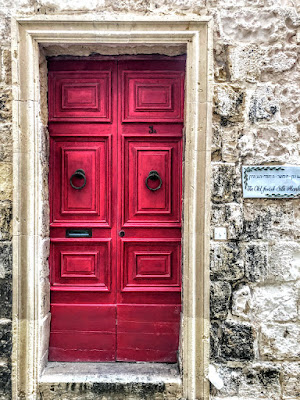 I wandered through the narrow, rain-dampened streets and alleyways of Mdina yesterday in search of any signs of the city’s former Jewish community, which once made up a third of Mdina’s population and was self-governing, ruled by the Universitas Judeorum and located in the quarter known as Gewwa r-Rokka.

The narrow main street of Mdina, Triq Villegaignon, is only 230 metres long and runs south to north, from the baroque main gate to Bastion Square. It is lined with former palazzi, tourist shops, churches and convents. Halfway along the street, Saint Paul’s Square leads into Saint Paul’s Cathedral, which remains Malta’s official cathedral, although the knights built Saint John’s Co-Cathedral in Valletta in the early 17th century.

As I strolled along the street, and stepped into the small squares and side alleyways, I failed to find any of the traces of mezuzoth said to be still visible in the stone frames of the front doors here and there. 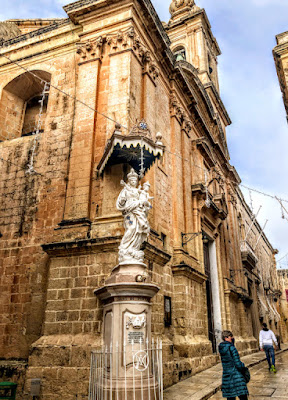 The Carmelite Church in Mdina … some sources say it stands on the site of the mediaeval synagogue (Photograph: Patrick Comerford, 2022)

A little further north along the main street, the Carmelite Church towers above the other buildings. No architectural or archaeological remains or features of the synagogue have been found, although some guidebooks suggest the church stands on the site of the medieval synagogue.

However, other sources suggest the synagogue stood on Triq il-Karmnu or Carmel Street, a narrow alleyway running along the north side of the church and the Carmelite cloisters.

A sign in English and Hebrew identifies one crumbling building behind a red door on Carmel Street as the ‘Old Jewish Silk Market.’ It is a reminder of the importance of the Jewish community in the economic life of mediaeval Mdina. Another doorway on Carmel Street also reminds visitors that at one time the city also had a thriving Greek community.

At its north end, Villegaignon Street opens into Bastion Square. There too a large building fronting the square is identified by some sources as the site of Mdina’s mediaeval synagogue. But there is no plaque or marker to support this suggestion. 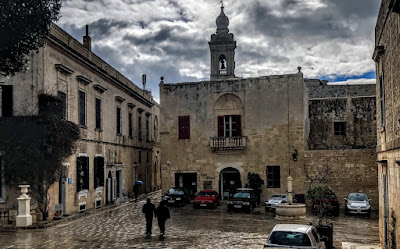 Bastion Square … could the house on the left stand on the site of the mediaeval synagogue? (Photograph: Patrick Comerford, 2022)

In the neighbouring Rabat there is a compound of catacombs caves, quarried out about 2,200 years ago. Engravings of a menorah can be seen on some of the tombs, although in some cases, it has been asked, whether these may indicate not that the dead person was a Jew but that he person had made a pilgrimage to Jerusalem. Most of the menorahs are with rounded arms, and some have diagonal arms.

During World War II, the catacombs were used as shelters, and people scattered the contents of the graves. Rabbi Reuven Ohayon of Malta sought permission from the Ministry of Tourism to collect the scattered bones and place them in the tombs next to them. But, the government response was to lock the Jewish burial caves and for years, the Jewish catacombs were closed to the public.

A compromise was reached when a permit was given to collect the scattered bones and to bury them in a mass grave in the Jewish cemetery.

Later on Thursday afternoon, I continued on north to Saint Paul’s Bay, and then returned along the east coast of Malta through St Julian’s and Sliema to Valletta in the evening. 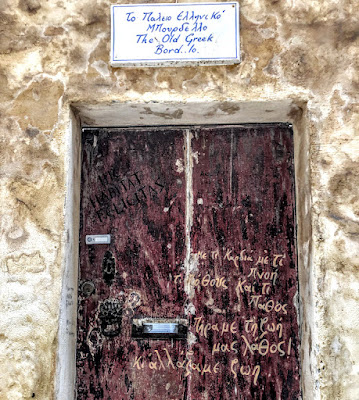 A doorway in Carmel Street is a reminder that Mdina once had a large Greek community too (Photograph: Patrick Comerford, 2022)