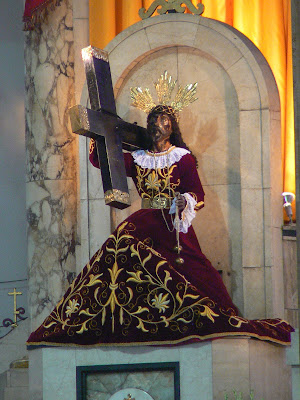 The ‘Black Nazarene’ of Manila in the Basilica of Saint John the Baptist or Quiapo Church (Photograph: Constantine Agustin / Wikpedia)

This morning’s Gospel reading (Luke 3: 15-17, 21-22) is a reminder that Saint John the Baptist – like all the saints – draws attention not to himself, but to Christ. And so, this morning, I am reflecting on the Black Nazarene of Manila or ‘Nuestro Padre Jesús Nazareno.’

The ‘Black Nazarene’ is a blackened, life-sized wooden statue of Christ carrying a cross.

The ‘Black Nazarene’ was made in Mexico in the early 17th century by an Aztec carpenter, and was brought to Manila in the Philippines by Spanish Augustinian missionaries in 1606. On the journey, the ship caught fire, burning the icon, but local people saved the charred statue., which was enshrined in the Church of San Juan Bautista in Bagumbayan (now Luneta) until 31 May 1606. In 1608, it was enshrined in the Church of San Nicolás de Tolentino in Intramuros. It was moved to the Basilica of Saint John the Baptist, known popularly as the Quiapo Church, on 9 January.

Miracles, especially healings, have been reported in its presence ever since. The Church of Saint John the Baptist in Quiapo was burned down around it in 1791 and in 1929, it was destroyed by earthquakes in 1645 and 1863, and it was damaged during bombing in 1945.

Pope Innocent X issued a papal bull in 1650 that canonically established the Cofradia de Jesús Nazareno to encourage devotion to the ‘Black Nazarene.’ In the 19th century, Pope Pius VII granted indulgences to people who prayed piously before the image.

For many centuries, it was carried through the streets of Manila on 9 January every year, and people would rub cloths on it to make healing relics. However, centuries of this popular devotion have left the statue in bad shape, and since 1998 a replica is paraded at the feast day celebrations on this day.

The replica continues to be carried through the streets of Manila on a gilded carriage by barefoot men shouting ‘Viva Señor’, while the crowds try to touch the statue.

People come from all over Manila in the hope of getting close enough to touch the image. At times, people who touch the statue are reported to be healed of diseases. They also throw towels to the police who guard the statue and ask them to rub the towel on the statue in hopes of carrying some of that power away with them. Most in the crowd go barefoot as a sign of humility as they follow the statue.

The prayer in the prayer diary of the Anglican mission agency USPG (United Society Partners in the Gospel) invites us to pray this morning (9 January 2022):

O Lord,
may we feel the presence of the
Holy Spirit in our daily lives.
Help us to be led by the Spirit.