Praying with the Saints in Ordinary Time:
12 February 2022 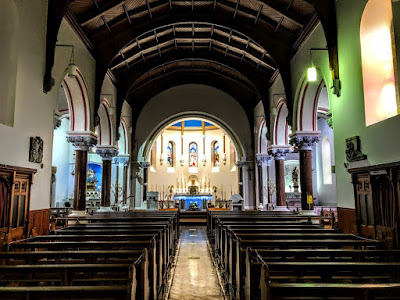 Later this morning, I have to put the finishing touches to tomorrow’s services and sermons in Castletown and Rathkeale. But before this busy day begins, I am taking some time early this morning for prayer, reflection and reading.

‘I thought of the soul as resembling a castle, formed of a single diamond or a very transparent crystal, and containing many rooms, just as in Heaven there are many mansions.’

1 those days when there was again a great crowd without anything to eat, he called his disciples and said to them, 2 ‘I have compassion for the crowd, because they have been with me now for three days and have nothing to eat. 3 If I send them away hungry to their homes, they will faint on the way – and some of them have come from a great distance.’ 4 His disciples replied, ‘How can one feed these people with bread here in the desert?’ 5 He asked them, ‘How many loaves do you have?’ They said, ‘Seven.’ 6 Then he ordered the crowd to sit down on the ground; and he took the seven loaves, and after giving thanks he broke them and gave them to his disciples to distribute; and they distributed them to the crowd. 7 They had also a few small fish; and after blessing them, he ordered that these too should be distributed. 8 They ate and were filled; and they took up the broken pieces left over, seven baskets full. 9 Now there were about four thousand people. And he sent them away. 10 And immediately he got into the boat with his disciples and went to the district of Dalmanutha.

The Prayer in the USPG Prayer Diary today (12 February 2022) invites us to pray:

We pray for peace in Japan, across Asia and around the world.