‘It is very good to pour out
your heart to God as you
would to a true, good friend’ 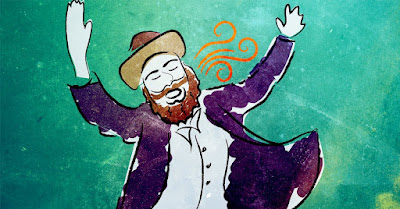 This year marks the 250th anniversary of the birth of Rabbi Nachman of Breslov, who was born, lived and died in what is part of modern Ukraine

As the war in Ukraine continues mercilessly, I am thinking this Friday evening that recently it was the 250th anniversary of the birth of Rabbi Nachman of Breslov, one of the most celebrated and loved figures in Hasidic Judaism, who was born, lived and died in what is part of modern Ukraine.

Rabbi Nachman (1772-1810) of Breslov is still regarded today, 250 years after his birth, as one of the leading figures of authority in the world of religious Jewish world. Until the Russian invasion of Ukraine, His grave in Uman was one of the most important places of mass pilgrimage for Jews.

Nachman of Breslov (נחמן מברסלב), also known as Reb Nachman of Bratslav, Reb Nachman Breslover (רבי נחמן ברעסלאווער), and Nachman from Uman , was the founder of the Breslov Hasidic movement. He spent most of his life in Breslov, sometimes known as Bratslav, in Ukraine – although the city is sometimes confused with Bratislava in Slovakia and Breslau or Wrocław in Poland.

Reb Nachman of Breslov was born 250 years ago 4 April 1772 (Rosh Chodesh Nisan 5532), in Międzybóż, then in Poland. Medzhybizh, also known as Mezhybozhe, had a population of about 2,000 people until the Russian invasion of Ukraine.

Reb Nachman was a great-grandson of the Baal Shem Tov. He revived the Hasidic movement by combining the esoteric secrets of Judaism in the Kabbalah with in-depth Torah scholarship. He attracted thousands of followers during his lifetime, and his influence continues today through many Hasidic movements such as Breslov Hasidism.

His religious philosophy revolved around closeness to God and speaking to God in normal conversation ‘as you would with a best friend.’ Central to his thinking is the concept of hitbodedut – literally ‘to make oneself be in solitude.’

In his short life, Reb Nachman achieved much acclaim as a teacher and spiritual leader, and he is considered a seminal figure in the history of Hasidism.

He rejected the idea of hereditary Hasidic dynasties, and taught that each Hasid must ‘search for the tzaddik or saintly or righteous person for himself, and within himself. He believed that every Jew has the potential to become a tzaddik.

He emphasised that a tzaddik should magnify the blessings on the community through his mitzvot. However, the tzaddik cannot ‘absolve’ a Hasid of his sins, and the Hasid should pray only to God, not to the Rebbe. The purpose of confiding in another human being is to unburden the soul as part of the process of repentance and healing.

In his early life, he stressed the practice of fasting and self-castigation as the most effective means of repentance. In later years, however, he abandoned these severe ascetisms because he felt they may lead to depression and sadness. He told his followers not to be ‘fanatics.’ Rather, they should choose one personal mitzvah to be very strict about, and do the others with the normal amount of care.

He encouraged his disciples to take every opportunity to increase holiness in themselves and their daily activities. For example, by marrying and living with one’s spouse according to Torah law, one elevates sexual intimacy to an act bespeaking honour and respect to the God-given powers of procreation. This in turn safeguards the sign of the covenant, the brit milah or ‘covenant of circumcision’ which is considered the symbol of the everlasting pact between God and the Jewish people.

He urged everyone to seek out his own and others’ good points in order to approach life in a state of continual happiness. If one cannot find any ‘good points’ in himself, let him search his deeds. If he finds that his deeds were driven by ulterior motives or improper thoughts, let him search for the positive aspects within them. And if he cannot find any good points, he should at least be happy that he is a Jew. This ‘good point’ is God's doing, not his.

He placed great stress on living with faith, simplicity, and joy. He encouraged his followers to clap, sing and dance during or after their prayers, bringing them to a closer relationship with God.

He frequently prayed using extemporaneous prayers. He taught that his followers should spend an hour alone each day, talking aloud to God in his or her own words, as if ‘talking to a good friend.’ This is in addition to the prayers in the siddur.

Breslover Hasidim still follow this practice today, which is known as hitbodedut, ‘to make oneself be in solitude.’ Reb Nachman taught that the best place to do hitbodedut was in a field or forest, among the natural works of God’s creation.

Reb Nachman often couched his teachings in stories, many of which have since become classics in the Jewish world. He explained that he was doing so since the stories had the power to awaken slumbering souls.

Telling of princesses and paupers, kings and knaves, sinners and saints, the stories contain deep kabbalistic secrets as well as practical lessons. Thirteen of these epic stories are found in Sipurei Maasiyot, which contains both Hebrew and Yiddish texts, so that scholars and simpletons alike could access them and their valuable messages.

He also emphasised the importance of music for spiritual development and religious practice. Some of his teachings are well-known songs.
W
hen passing through the city of Uman in 1807 on his way from Zlatopol, where he had been persecuted, to Breslov, where he was to be welcomed, he stopped off in an old Jewish cemetery. There, in two mounds, were buried the Jewish victims of a vicious massacre by Ivan Gonta and his mob of Haidamak rebels in 1768. Standing between the mounds, he said, ‘It is good to lay here.’ Sure enough, when he died in Uman he was buried in that exact spot.

He died on 16 October 1810 in Uman, a city in in Cherkasy Oblast in central Ukraine, to the east of Vinnytsia. The city, which had a population of over 82,000, remained a centre of pilgrimage for Breslov Hasidic Jews before the Russian invasion of Ukraine.

‘It is a great mitzvah to be happy always.’

‘Never give up hope! There is no despair.’

‘Worldly desires are like sunbeams in a dark room. They seem solid until you try to grasp one.’

‘It is very good to pour out your heart to God as you would to a true, good friend.’

‘The essence of wisdom is to realise how far from wisdom you are.’

‘All the sages of Israel are in my estimation like a garlic peel.’

‘Wherever I go, I’m always going to Israel.’

‘All the world is a very narrow bridge, but the main thing is to have no fear at all.’

‘As the hand held before the eye conceals the greatest mountain, so the little earthly life hides from the glance the enormous lights and mysteries of which the earth is full, and he who can draw it away from before his eyes, as one draws away a hand, beholds the great shining of the inner worlds.’

‘A man must cross a narrow bridge, and the main thing is not to fear at all.’

‘It is forbidden to give up on yourself.’