Praying with USPG and the music of
Vaughan Williams: Wednesday 14 September 2022 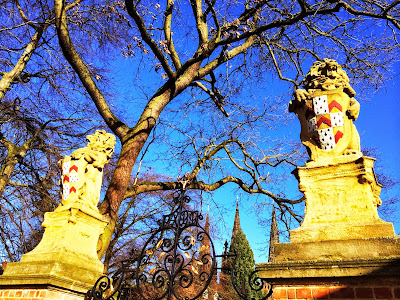 The spires of Lichfield Cathedral seen from the gates of the Garden of Remembrance in Lichfield … the lettering on the gates says: ‘Pax 1919’ (Photograph: Patrick Comerford)

Today is Holy Cross Day in the Calendar of the Church of England in Common Worship (14 September).

I left Sheffield, yesterday following ‘gamma knife’ or stereotactic radiosurgery in the Royal Hallamshire Hospital on Monday as a follow-up to my stroke (AVM) six months ago (18 March 2022).

Two of us are spending a few days in York as I take some rest and time to recover, and perhaps we may visit York Minster and Durham Cathedral during these few days. But, before today begins, I am taking some time this morning for reading, prayer and reflection.

The cross on which Christ was crucified has become the universal symbol of Christianity, replacing the fish symbol of the early Church, though the latter has been revived in recent times. After the end of the era of persecution, early in the fourth century, pilgrims began to travel to Jerusalem to visit and pray at the places associated with the life of Christ. Helena, the mother of the Emperor Constantine, was a Christian and, while she was overseeing excavations in the city, it is said she uncovered a cross that many believed to be the Cross of Christ. A basilica was built on the site of the Holy Sepulchre and dedicated on this day in the year 335.

[Jesus said to Nicodemus:] 13 ‘No one has ascended into heaven except the one who descended from heaven, the Son of Man. 14 And just as Moses lifted up the serpent in the wilderness, so must the Son of Man be lifted up, 15 that whoever believes in him may have eternal life.

17 ‘Indeed, God did not send the Son into the world to condemn the world, but in order that the world might be saved through him.’

This morning [14 September 2022], I am listening to the third movement, ‘Reconciliation.’

The heart of Dona nobis pacem is found in the third movement, ‘Reconciliation.’ In this movement, Vaughan Williams uses this heart-wrenching poem by Walt Whitman in its entirety.

Although Whitman’s long lines are not easily set to music, the words have an almost intolerable beauty, marked by truth and compassion in the face of the shocking carnage suffered by humanity.

‘Reconciliation’ transcends the threatening atmosphere with a striking, bitter-sweet moment. Set like a lullaby, Whitman’s text offers a promise to the dead enemy – ‘a man divine as myself’ – that time will wash away the awful deeds of war, a promise sealed with a kiss.

The text is matched in perfect spirit by the beautiful setting by Vaughan Williams, sung by the commanding yet gentle voice of the baritone soloist. The baritone introduces the first half of the poem, which the choir echoes and varies.

The baritone then continues with the rest of the poem, followed by the choir presenting a new variation of the first half.

At the end, the soprano repeats a variation of Dona nobis pacem, which we heard in the first movement, hauntingly soaring above the final lines of the chorus.

Word over all, beautiful as the sky,
Beautiful that war and all its deeds of carnage must in time be utterly lost,
That the hands of the sisters Death and Night incessantly, softly,
Wash again and ever again this soiled world;
For my enemy is dead, a man as divine as myself is dead,
I look where he lies white-faced and still in the coffin – I draw near,
Bend down and touch lightly with my lips the white face in the coffin.

The war memorial cross in Grantchester Churchyard … the name of the poet Rupert Brooke is inscribed alongside those of parishioners (Photograph: Patrick Comerford)

Almighty God,
who in the passion of your blessed Son
made an instrument of painful death
to be for us the means of life and peace:
grant us so to glory in the cross of Christ
that we may gladly suffer for his sake;
who is alive and reigns with you,
in the unity of the Holy Spirit,
one God, now and for ever.

Faithful God,
whose Son bore our sins in his body on the tree
and gave us this sacrament to show forth his death until he comes:
give us grace to glory in the cross of our Lord Jesus Christ,
for he is our salvation, our life and our hope,
who reigns as Lord, now and for ever.

Jesus died on the cross for our sins. Let us give thanks for the love of God, which knows no limits, and the sacrifice made so that we could be saved.

The Crucifixion depicted on the rood in the chapel of Pusey House, Oxford (Photograph: Patrick Comerford, 2022)