It’s a long way to Tipperary,
as a question mark hangs
over the pub on Fleet Street

The Tipperary on Fleet Street … it is now closed and its future looks grim (Photograph: Patrick Comerford, 2022)

When I was a working journalist and Foreign Desk at The Irish Times, I frequently visited Fleet Street. In those days, The Irish Times had an office in the PA Building, and there were colleagues to meet from other newspapers too.

There were visits too to Saint Bride’s, the journalists’ church on Fleet Street, which also had a family link through a former rector, the Revd Edwards Comerford Hawkins (1827-1906), father of Anthony Hope, author of The Prisoner of Zenda. During the 1980s and 1990s, there were constant vigils in Saint Bride’s for John McCarthy, Terry Anderson and other journalists held hostage in Lebanon.

In those days, liquid lunches were popular among journalists on the ‘Streets of Shame,’ and at a time when many journalists still worked on Fleet Street, Private Eye developed the character of Lunchtime O’Booze as the archetypal drunken journalist.

During those visits, many colleagues in London insisted on repeating the story that one of those popular pubs, The Tipperary, had given its name to the war song of soldiers pining to return not to provincial Ireland but to London, including Piccadilly, Leicester Square and the pubs frequented by the printers who worked on Fleet Street.

The journalists, the newsrooms and the printers have long moved out of Fleet Street. The street continues to change. And now, as I found out last week, the Tipperary, one of the oldest Irish bars in London, has closed its doors at 66 Fleet Street for the last time.

The Tipperary is within sight of and just a stone’s throw away from Saint Paul’s Cathedral, and claimed to be the oldest Irish pub in London. Through the years it was better known as a journalists’ pub rather than an Irish pub, and it was a well-known haunt for editors and journalists, alongside barristers from the nearby courts.

The journalists have long gone from Fleet Street, although there are signs everywhere that this was once the hub of real journalism in the English-speaking world.

Now, sadly, even the Tipperary has closed its doors and has been issued with a possession order, raising fears about the future of the Grade II listed building.

There has been a pub on the site since the 15th century, although 1605 is claimed as the foundation date. It became an Irish pub when JG Mooney and Co bought the Boar’s Head in the late 19th century. It claimed – not without contention – to be the ‘oldest Irish pub’ in London and was said to be one of the first pubs in London to serve Guinness.

I had always thought – and repeated on many occasions – that the World War I song, ‘It’s long way to Tipperary,’ took its name not from Tipperary Town but from The Tipperary on Fleet Street. 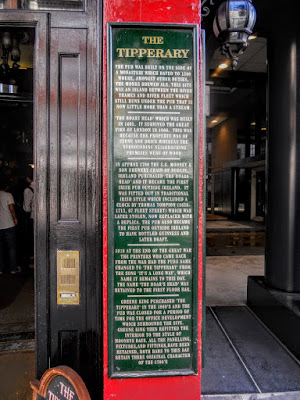 The Tipperary on Fleet Street … tall tales once graced the noticeboard beside the front door (Photograph: Patrick Comerford)

The Tipperary is a beautiful building architecturally, it was known for its mosaic flooring and antique decor. A colourful noticeboard at the entrance has been painted over in the last year or two, but in the past it perpetuated many of the myths associated with this much-photographed pub.

The noticeboard was littered with grammatical errors and spelling mistakes that could have been corrected by every Fleet Street sub-editor who passed through its doors on the way to a liquid lunch. Perhaps all this was in jest, as a challenge to the sobriety of journalists.

The sign claimed the pub was built in 1605 with stones from the Whitefriars Monastery, and that these stones helped the pub to survive ‘unharmed in the raging inferno of the Great Fire of London.’

The pub sign also claimed that at the end of World War I, Fleet Street printers returning from the war had the pub’s name changed to The Tipperary and that it has kept this name for 100 years since.

However, Martyn Cornell, whose ‘Zythophile’ blog looks at ‘bars, beer myths, beer nonsense, pub names, pubs [and] rants,’ has challenged ‘the reliability of the information on the sign at The Tipperary. He identified at least a dozen errors in just 10 sentences, from the names of proprietors to details about the pub’s history, as well as stories about that war-time song.

The future of the Tipperary is now in doubt (Photograph: Patrick Comerford, 2022)

The pub closed for a few years for refurbishment in the early 1980s. It was a Greene King pub by 1986, but had been in private ownership in recent years.

During Covid-19 closures, the pub struggled to cope with the lack of office workers in the city visiting after work. They were working from home instead, and the pub has been closed since December 2020.

It was reported in March 2021 that one rare Victorian mirror advertising Jameson whiskey had been removed from the building to be sold to a museum in Ireland. However, a passer-by noticed that the mirrors were being moved and alerted the City of London’s planning enforcement team who swiftly returned them to the site.

Last January, local residents submitted an application for the pub to be registered as an ‘Asset of Community Value’ that would secure its continued existence as a pub. The City of London Corporation approved the application in May, and the designation will remain in place for five years. This means that The Tipperary cannot be sold without first providing the local community with a chance to bid on the land or building.

Signs on the door and the windows declares that Equivo Limited, a ‘Collections & Field, Legal Services and Enforcement’ company acting on behalf of Whitefriars Ltd, re-entered and secured the premises under an Interim Possession Order issued in the County Court on 9 August 2022.

Equivo said it at the time that it ‘simply assisted with removing some squatters under a Court order.’ But when I walked by last week, some of the windows were open, leaving it vulnerable to any squatter who had a mind to regaining entry. 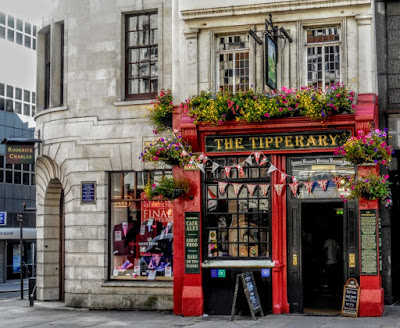 The Tipperary on Fleet Street in its heyday (Photograph: Patrick Comerford)