Saint Clare Street, off Minories, London, stands on the site of the former Abbey of the Minoresses of Saint Mary of the Order of Saint Clare (Photograph: Patrick Comerford, 2022)

In the Calendar of the Church of England in Common Worship, today recalls James Hannington, Bishop of Eastern Equatorial Africa, Martyr in Uganda, 1885 (29 October), with a Lesser Festival.

Since Monday, I have been reflecting in these ways in the morning:

St Clare House, Minories … a reminder of the Poor Clares’ presence near the Tower of London (Photograph: Patrick Comerford, 2022)

James Hannington was born in 1847 into a Congregationalist family and became an Anglican before going up to Oxford. He was ordained and, after serving a curacy for five years, went with the Church Missionary Society (CMS) to Uganda. He was consecrated bishop for that part of Africa in 1884 and a year later began a safari inland from Mombasa, together with other European and indigenous Christians. The ruler of the Buganda, Mwanga, who despised Christians because they refused to condone his moral turpitude, seized the whole party, tortured them for several days and then had them butchered to death on this day in 1885.

1 On one occasion when Jesus was going to the house of a leader of the Pharisees to eat a meal on the sabbath, they were watching him closely.

St Clare Coffee and Bar, Minories … a reminder of the Poor Clares’ presence in this part of London (Photograph: Patrick Comerford, 2022)

The Abbey of the Minories and Holy Trinity Church:

Minories is one of the more peculiar street names in London. Minories takes its name from an Abbey that once stood at the north end of the street, called the Abbey of the Minoresses of Saint Mary of the Order of Saint Clare.

The Minoresses, in turn, took their name from the Latin Sorores Minores, meaning Sisters of the Minor Order of Saint Francis, the women’s section of the Franciscan order founded by Saint Clara of Assisi.

The Abbey in Minories was established by Edmund ‘Crouchback’, Earl of Lancaster and brother of Edward I, some time before 1291, perhaps as early as 1281, to house nuns brought from Spain to England by his second wife Blanche of Artois, the widowed Queen of Navarre. She was a niece of King Louis IX of France and his sister Isabella, who founded the Poor Clares’ Abbey of Longchamp.

The Poor Clares of Aldgate had a mitigated form of their Rule that allowed them to own property. They lived an enclosed life on a site often said to be of five acres, although it may have been as little as half that size.

An early benefactor, Sir Henry le Galeys, Mayor of London, endowed a chantry in the chapel of Saint Mary in the nuns’ church, where he was buried. Substantial endowments came later from figures such as Queen Isabella, widow of Edward II, Margaret, Countess of Norfolk, and John of Gaunt, Duke of Lancaster.

These royal connections gave a certain cachet to the house, attracting women of noble birth and the daughters of wealthy merchants. After the death of her husband, Thomas de Beauchamp, 12th Earl of Warwick, in 1401, Margaret Beauchamp (née Ferrers), went to live in the Abbey with three matrons. Thomas of Woodstock, Duke of Gloucester, placed his young daughter Isabel in the Abbey, but had a house right next to the conventual church and had access to the abbey through a private entrance.

The Abbess sent a gift of distilled water of roses to the Tower of London for Elizabeth of York, the wife of Henry VII, in April 1502. The Queen gave a gift of money to three nuns and a servant of the Abbess.

The Minories … a public house takes its name from the nuns and their former abbey (Photograph: Patrick Comerford, 2022)

The Abbey suffered more than once from the plague and other epidemics, and it is said 27 nuns of the abbey died of the plague in 1515. Soon after, the convent buildings were destroyed by fire. It was rebuilt by 1520, with contributions from Henry VIII, Cardinal Wolsey, the mayor and aldermen of London and private individuals.

One of the last abbesses was Dame Dorothy Comberford (1524-1531). At the Tudor dissolution of the monastic houses, the abbey was surrendered in 1539. The last abbess was Dame Elizabeth Salvage.

By the time the Minoresses surrendered their Abbey to Henry VIII in 1539, they had grown wealthy through renting their lands, exemption from taxation, and the plentiful bequests they had received in the Medieval period.

Following the Dissolution, the Abbey landholdings passed first to John Clerk, Bishop of Bath and Wells, Henry VIII’s ambassador to the Duke of Cleves, but the king seized the bishop’s own London residence in compensation. It also came to house officers of the Tower of London.

Later, Edward VI gave the lands to Henry Grey, Duke of Suffolk and father of Lady Jane Grey, in 1552. In 1554 it reverted to government use, housing the Ordnance Office and its stores, transferred there from the Tower of London.

By 1598, the abbey precinct was used as armouries and coach-houses. In 1686, the area became part of the Liberties of the Tower of London.

Meanwhile, around 1563, the nuns’ chapel became a parish church, the Church of the Holy Trinity, Minories, and this was the last religious building on the site. All the ancient monuments were removed, a gallery, a new pulpit and pews were installed, and a steeple was built.

The church became a Puritan stronghold, where both John Field and Thomas Wilcox preached. The church survived the Great Fire of London in 1666, and was rebuilt in 1706, retaining the north wall of the mediaeval abbey church. Until 1730, the church claimed the rights of a royal peculiar, outside the jurisdiction of the Bishop of London, and the right to perform marriages without licence. Some of the surviving abbey buildings were destroyed by fire in 1797.

A mummified head found in the church vaults in 1849 was said to be the head of Henry Grey, 1st Duke of Suffolk, who was executed in 1554. The head was displayed in a glass case in the vestry, but later went to Saint Botolph’s without Aldgate, where it was interred in a vault and eventually buried in the churchyard in 1990.

Holy Trinity Church closed in 1899, and the pulpit was moved to All Saints’ Church, East Meon, Hampshire. The building survived as a parish hall until World War II, when it suffered severe bomb damage. A wall remained until final clearance of the area in the late 1950s.

The coffin of Anne de Mowbray, 8th Countess of Norfolk, who died aged eight, was unearthed at the abbey site in 1964, and was reburied in Westminster Abbey.

No evidence of the abbey church or any other parts of the Abbey remains today. St Clare, a coffee shop on Minories, St Clare Street, running east off Minories, Saint Clare House and the Minories public house are all are reminders of the abbey and its name. The end of St Clare Street marks the site of the Church of the Holy Trinity, Minories. 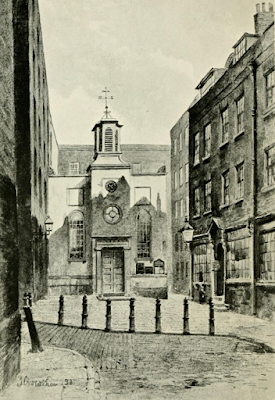 A drawing published in 1907 of the west front of the Church of Holy Trinity, Minories (Edward Murray Tomlinson, A history of the Minories, London, London: by London: Smith, Elder & Co, 1907)

Most merciful God,
who strengthened your Church by the steadfast courage
of your martyr James Hannington:
grant that we also,
thankfully remembering his victory of faith,
may overcome what is evil
and glorify your holy name;
through Jesus Christ your Son our Lord,
who is alive and reigns with you,
in the unity of the Holy Spirit,
one God, now and for ever.

God our redeemer,
whose Church was strengthened by the blood of your martyr James Hannington:
so bind us, in life and death, to Christ’s sacrifice
that our lives, broken and offered with his,
may carry his death and proclaim his resurrection in the world;
through Jesus Christ our Lord.

The theme in the USPG Prayer Diary this week has been ‘Theology in Korea.’ This theme was introduced on Sunday.

We pray for everyone seeking to put their faith into practice. May we be inspired by Scripture and work to serve our communities.

Minories seen from the door of Saint Botolph Without Aldgate (Photograph: Patrick Comerford, 2022)

Minories stands on the site of the former abbey estate (Photograph: Patrick Comerford, 2022)