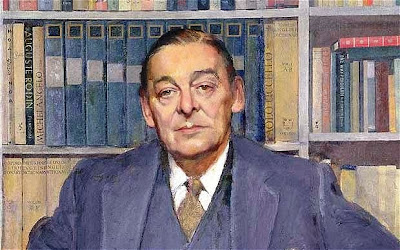 The poet TS Eliot in a portrait by Gerald Kelly

This is the Third Sunday before Advent (6 November 2022). In many parts of Ireland today is also the Feast of All the Saints of Ireland. Later this morning, I hope to be present at the Parish Eucharist in the Church of Saint Mary and Saint Giles in Stony Stratford.

But, before this day gets busy, I am taking some time this morning for reading, prayer and reflection. 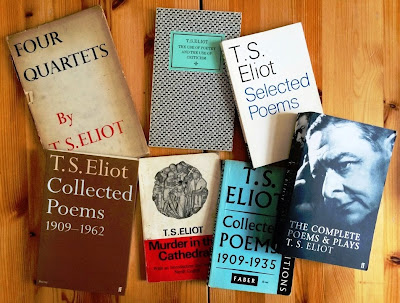 TS Eliot is the greatest poet in English in the 20th century (Photograph: Patrick Comerford)

In 1915, Eliot moved to Merton College, Oxford, which I was writing about in this prayer diary yesterday (5 November 2022). However, he left after a year, remarking: ‘Oxford is very pretty, but I don’t like to be dead.’ By 1916, he had completed a PhD in philosophy for Harvard, but he never returned for his viva voce exam.

Meanwhile, in 1915 he had been introduced to Vivienne Haigh-Wood. Their tragic marriage was a catalyst for ‘The Waste Land,’ and inspired the movie Tom and Viv (1994). Eliot held several teaching posts, including one at Highgate School where his pupils included John Betjeman. By 1917, he was working at Lloyd’s Bank.

In 1922, the same year as James Joyce published Ulysses, Eliot published ‘The Waste Land.’ The poem includes well-known phrases such as ‘April is the cruellest month,’ and ‘I will show you fear in a handful of dust.’ Recent studies see in ‘The Waste Land.’ a description of Eliot’s pilgrimage from the Unitarianism of his childhood to his life-lasting Anglo-Catholicism.

In 1925, Eliot joined the publishers Faber and Gwyer, later Faber and Faber, and spent the rest of his career there. His major poem that year, ‘The Hollow Men,’ is indebted to Dante and wrestles with the difficulty of hope and religious conversion, and with his failed marriage.

On 29 June 1927, Eliot was baptised in Holy Trinity Church, Finstock, outside Witney in Oxfordshire, by the Revd William Force Stead, a fellow American, a poet and chaplain of Worcester College, Oxford. Stead had encouraged Eliot to read the poems of George Herbert and John Donne and the sermons of Lancelot Andrewes. A day later, he brought Eliot to be confirmed by Bishop Thomas Banks Strong of Oxford in his private chapel.

His poem, ‘Journey of the Magi’ (1927), the first of the Ariel Poems and written shortly after his baptism, begins with a quotation from a sermon on the Epiphany by Andrewes in 1622. He was influenced too by Nicholas Ferrar’s life at Little Gidding, and by the works of Richard Hooker and Jeremy Taylor.

Eliot soon became a British citizen, and served as a churchwarden at Saint Stephen’s Church, Gloucester Road, London. He would describe himself as a ‘classicist in literature, royalist in politics, and Anglo-Catholic in religion.’

‘Ash Wednesday’ (1930), Eliot’s first long poem after becoming an Anglican, has been described as his conversion poem. But he regarded the Four Quartets as his masterpiece, and the collection earned him his Nobel Prize for Literature in 1948. His plays included Murder in the Cathedral (1935) and The Cocktail Party (1949).

In 1958, Archbishop Geoffrey Fisher of Canterbury appointed Eliot to a commission that produced The Revised Psalter (1963). CS Lewis, once a harsh critic of Eliot, was also a member of the commission, and during their time on that commission their antagonism turned to true friendship.

Eliot’s reputation has been plagued by accusations that he held anti-Semitic and anti-Irish views. In a study of Eliot’s impact on Anglican theology, Professor Barry Spurr seeks to deal convincingly with the accusations of antisemitism. 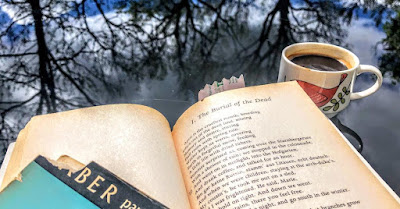 ‘And went on in sunlight, … And drank coffee, and talked for an hour’ … coffee and TS Eliot’s ‘The Waste Land’ in the Rectory garden in Askeaton, Co Limerick (Photograph: Patrick Comerford)

‘The Waste Land’, which I am reflecting on throughout this week, was first published 100 years ago at the end in 1922. It is a masterpiece of modern literature and one of the greatest poems in the English language. Its opening lines are often quoted, even by people who have never read all five sections and 434 lines of the poem.

Well-known and oft-quoted phrases in ‘The Waste Land’ include ‘April is the cruellest month,’ ‘I will show you fear in a handful of dust,’ and the mantra in Sanskrit, ‘Shantih shantih shantih.’

‘The Waste Land’ is divided into five sections:

1, ‘The Burial of the Dead’, introduces the diverse themes of disillusionment and despair.

2, ‘A Game of Chess’, employs alternating narrations, in which vignettes of several characters address those themes experientially.

3, ‘The Fire Sermon’, offers a philosophical meditation in relation to the imagery of death and views of self-denial in juxtaposition, influenced by Augustine of Hippo and Eastern religions.

5, ‘What the Thunder Said’, the culminating fifth section, concludes with an image of judgment.

Inside the chapel in Merton College, Oxford … Eliot left after a year (Photograph: Patrick Comerford, 2022)

Almighty Father,
whose will is to restore all things
in your beloved Son, the King of all:
govern the hearts and minds of those in authority,
and bring the families of the nations,
divided and torn apart by the ravages of sin,
to be subject to his just and gentle rule;
who is alive and reigns with you,
in the unity of the Holy Spirit,
one God, now and for ever.

God of peace,
whose Son Jesus Christ proclaimed the kingdom
and restored the broken to wholeness of life:
look with compassion on the anguish of the world,
and by your healing power
make whole both people and nations;
through our Lord and Saviour Jesus Christ.

The theme in the USPG Prayer Diary this week is ‘A New Commandment.’ This theme is introduced this morning by Sue Claydon, chair of the Anglican Pacifist Fellowship. She writes:

Two of the definitions of armistice are ‘a state in which there is no war’ and ‘peace’. This week, Armistice Day remembers not only the ending of war in 1918, but also all the victims of wars in the 104 years since. When we look at what ‘peace’ means, it is more than the absence of war.

An essential factor in peace-making is reconciliation, which takes full account of justice and is built into all aspects. This is not an easy or quick process. It takes commitment and time. 2022 has seen war in many places. The victims of war have filled our media but have we the commitment to work to see the tragic consequences of war cease?

While the impact on humanity of violence is clear to see, the work of those who are following the call to be peacemakers around the Anglican Communion is rarely emphasised. Jesus gave a new commandment, ‘You have heard that it was said, ‘Love your neighbour and hate your enemy.’ But I tell you, love your enemies and pray for those who persecute you.’ This week let us think about how as individuals and churches we can truly follow this commandment.

‘Though the mountains be shaken and
the hills be removed,
yet my unfailing love for you
will not be shaken
nor my covenant of peace be removed,’ says the Lord. 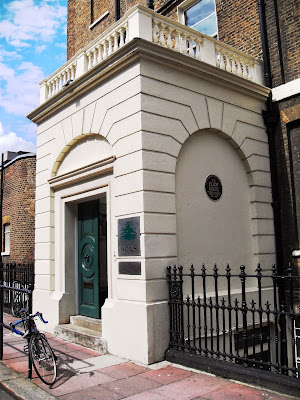 No 24 Russell Square, London, where TS Eliot worked for Faber and Faber, is now part of the School of Oriental and African Studies in London (Photograph: Patrick Comerford) 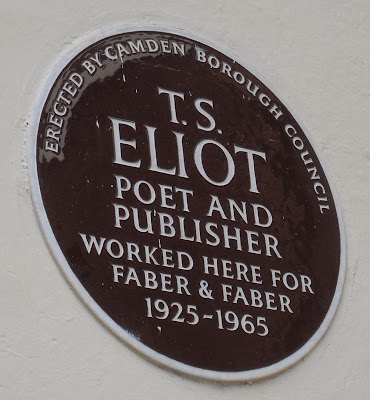