Back in Cambridge for a week’s study 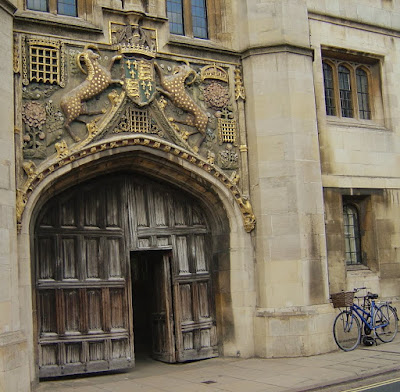 I’m back in Cambridge once again, for the anual summer school in Sidney Sussex College organised by the Institute for Christian Orthodox Studies. However, tonight I’m staying in Christ’s College, where I stayed early last year when I preached in the chapel at the Candlemas celebrations in February.

Throughout this year, Christ’s College Chapel is celebrating its first 500 years of its spiritual presence and tradition in Cambridge since its consecration in June 1510. A Solemn Evensong of Thanksgiving and re-dedication was the highlight of chapel life last month. This was the Sunday nearest the 500th anniversary of the consecration of the chapel, and the president and preacher was Bishop Michael Jackson of Clogher.

The 500th anniversary composition competition winner was Tom Smith, for his entry, Where shall I flee from your presence?, which was performed at the Chapel Quincentenary Festal Evensong.

The Chapel of Christ’s College, Cambridge … the college is celebrating the 500th anniversary of the consecration of the chapel (Photograph: Patrick Comerford)

Earlier this year, Candlemas was marked in February with a Quincentenary Candlemas Compline and torchlight procession, reliving the mediaeval liturgy of Candlemas in the beautiful surroundings of first court and Chapel.

In November, there will be a Quincentenary Celebrity Poetry Reading in Chapel with the Christ’s College Poet-in-Residence, Ruth Padel, a direct descendant of Charles Darwin, who was an undergraduate at Christ’s at the beginning of the 19th century.

Later in November, the Christ’s College Choir Association will be launched at Chroal Evensong and a re-union dinner in Hall, brnging together former and current choral scholars and choir members to celebrate the choral tradition at this college in the hope of enuring its presence in future generations.

The Chapel of Christ’s College was consecrated on or around 1 June 1510 by the then Bishop of Ely, James Stanley, a step-son of Lady Margaret Beaufort, who founded Christ’s College in 1505. Bishop Stanley’s step-mother was also the mother of King Henry VII. A pious woman, it is said she heard Mass from a gallery now represented by a window in the south wall of the chapel, although the chapel was not formally consecrated until a year after her death.

The chapel survived the Reformation and now stands as a spiritual presence at the front of Christ’s College, tucked away beside the Master’s Lodge. Much of the original chapel fabric is still visible and its original construction is almost entirely in tact.

Later tomorrow [Sunday] I move into my rooms in Sidney Sussex College, and I’m looking forward to meeting old friends again, to renewing acquaintances, to having time to study and special times for prayer.

Feeling very sad not to be there with you and all the other students this year. Please give my best to Marcus and David, and especially to Father Alexander. I was not able to make the trip this year, but will try to save up some shekels for next summer. If you make it to Browns or a good pub for a late beer and theological discussion (at which our continuing status as heretics will no doubt be affirmed by Fr A!), please remember me in your thoughts and 'pray for us sinners'.

Have a joyous and refreshing week!