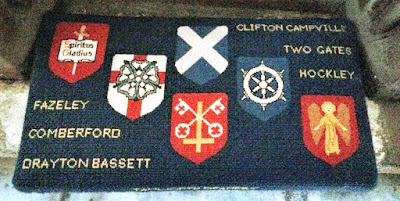 A hassock with the name of Comberford in a niche in Lichfield Cathedral (Photograph: Patrick Comerford, 2015)

It brought a smile to my face when I walked around Lichfield Cathedral after the mod-day Eucharist last Saturday [24 October 2015], and found that a hassock with the name of Comberford is still sitting comfortably although the church in Comberford village closed over two years ago in October 2013.

The hassock represents a group of churches in the Tamworth Deanery, and it was not too difficult to find last Saturday afternoon. The other churches named on this hassock are Fazeley, Drayton Bassett, Clifton Camville, Two Gates and Hockley.

It is just a year since Malcolm Fisher posted a short film of the church in Comberford on YouTube that illustrates the sadness created when a village church closes.

On Friday 31 October 2014, he had to get complete strangers and their tractor to haul him and his car out of the mud. He felt he ought to say a prayer of thanks, and so he headed to the tiny village of Comberford, where he knew there was a tiny church dedicated to Saint Mary and Saint George.

“My plan was sadly foiled, as the Church was locked securely and no access could be gained,” he recalls “Nonetheless, as it was an incredibly warm day for the time of year, I captured a video to share my experience and I chose a favourite Classical Piece of Music to accompany it, namely Gymnopedie No. 1 by Satie.”

Posting his film on YouTube, he said he hoped “you find a little peace and tranquillity when you watch the finished effort.”

The church was built just after the World War I but held its final service two years ago on Sunday 13 October 2013 before closing its doors for the very last time. This was a Harvest Festival Service led by Bishop of Wolverhampton, the Right Revd Clive Gregory.

The church was originally built in 1919 on land donated by the Paget family to the Lichfield Diocesan Trust for the erection of a mission church.

The church closed despite the fact that the villagers and parishioners in Comberford and Wigginton Parish had raised £6,000 to repair the roof of the church after an unsuccessful National Lottery community grant application.

The hassock in Lichfield Cathedral bearing the name of Comberford bears a logo with a Red Cross for Saint George embossed with a White Rose for the Virgin Mary, the two patrons of Saint Mary’s and Saint George’s.

The village church in Comberford remains closed, its future is still uncertain, and the experience of Malcolm Fisher shows how its closure means the loss of many, uncountable opportunities for mission and outreach.