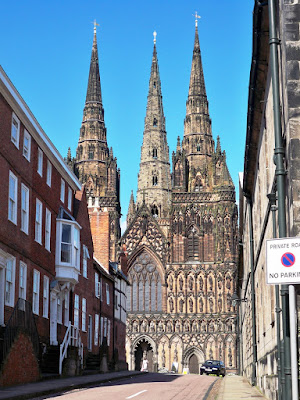 Lichfield Cathedral in the sun before Choral Evensong today ... Pugin declared the fabric had been mutilated by “this monster of architectural depravity, this pest of Cathedral architecture” (Photograph: Patrick Comerford,2010)

I am staying in Lichfield this weekend, and decided today to catch local buses to Uttoxeter and Cheadle and to go in search of some of Pugin’s architectural legacy in this part of England.

My great-grandfather and grandfather both worked as stuccordores on the churches built by the great English Gothic architect, AWN Pugin, and buildings designed by successors. Having lived and worked in both Lichfield and Co Wexford, I am amused that Pugin’s legacy is to be found mainly in Staffordshire and in Co Wexford. 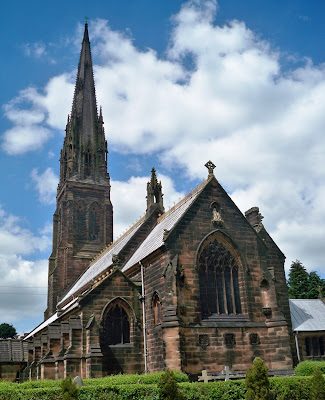 Britain’s distinguished architectural historian, the late Sir Nikolaus Pevsner, once described Staffordshire as “Pugin-land” after visiting Cheadle, the market town dominated by Saint Giles’s Church and its 200 ft spire. He wrote: “Nowhere can one study and understand Pugin better than in Staffordshire – not only his forms and features but his mind, and not only his churches but his secular architecture as well.”

Pugin-Land is a description that inspired the title of the Revd Michael Fisher’s book on Pugin, Lord Shrewsbury and the Gothic revival in Staffordshire. But in many ways Co Wexford could be described easily as Ireland’s own “Pugin-Land,” for nowhere else in Ireland can one study and understand Pugin better than in Co Wexford, where the landscape is speckled with some of the finest examples of his imagination and creativity, each an effort to recreate in Ireland the ideal English Gothic parish churches or cathedrals.

It is as though Saint Aidan’s Cathedral in Enniscorthy stands proudly at the centre of this wonderland, and radiating from it are some of Pugin’s most delightful creations – the Chapel of Saint Peter’s College, Wexford and seven or eight other churches, chapels or convents: the Church of the Assumption in Bree; Saint James’s Church, Ramsgrange; the Church of Saint Michael the Archangel in Gorey and the neighbouring Loreto Convent; Saint Mary’s Church, Tagoat; Saint Alphonsus’s Church, Barntown; and the Power chapel in Edermine and the Cliffe chapel at Bellevue, which may have been built after according to plans drawn by the Gothic master himself. 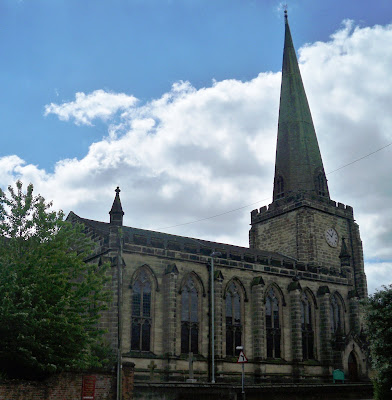 These churches were so influential on church building and design that they set a remarkable standard for ecclesiastical architecture, decoration and style. The architectural influence that is shared by Co Wexford and Staffordshire is interesting, so that Saint James’s, Ramsgrange, for example, is like several contemporary but much smaller churches designed by Pugin, such as Saint Mary’s, Uttoxeter, and Saint Augustine’s, Solihull, both of which he also designed in 1838.

Here in Lichfield it is interesting to discover that Pugin’s first visit to Staffordshire was in the autumn of 1834, when he stayed in Lichfield during an extensive architectural tour of the Midlands and the West Country “in search of the picturesque and the beautiful.”

Pugin’s stay in Lichfield was memorable for two reasons. First of all, he arrived late at night, and in the dark he crept unwittingly into the wrong bedroom. Aware of something soft and warm in the bed, he found it to be “the thigh of a female occupant already turned in.”

There were loud screams and shouts. Chambermaids came rushing in with lighted candles. Pugin had some difficulty in convincing everyone that he had made a genuine mistake.

But Pugin was in for another unpleasant shock when he visited Lichfield Cathedral the next day. Taken aback by James Wyatt’s the refurbishment of the cathedral thirty years earlier by James Wyatt (1746-1813), he declared: “Yes – this monster of architectural depravity, this pest of Cathedral architecture, has been here. need I say more.” And then, referring to the Lichfield architect, Joseph Potter (1756-1842), he said: “The man I am sorry to say – who executes the repairs of the building was a pupil of the Wretch himself and has imbibed all the vicious propensities of his accursed tutor without one spark of even practical ability to atone for his misdeeds.”

He found the fabric of the cathedral had been mutilated by “the Wretch” – and he also described Lichfield as “a dull place – without anything remarkable.” Interestingly, Potter preceded Pugin as the architect of Oscott College. 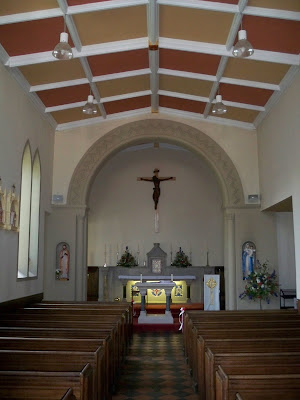 The interior of the Church of the Holy Cross, Upper John Street, Lichfield, today ... the screen and furnishings designed by Pugin in 1841 are no longer here (Photograph: Patrick Comerford, 2010)

Pugin revisited Lichfield in 1837. After staying briefly at Wolseley Park with Sir Charles Wolseley, a recent convert to Roman Catholicism, Pugin returned to Lichfield. There Joseph Potter had built the Roman Catholic Church of the Holy Cross, and Pugin would add a screen and other furnishings in 1841 ... although they have long disappeared.

Later, the West Doors of Lichfield Cathedral would inspire Pugin’s design for the doors of Saint Chad’s Roman Catholic Cathedral in Birmingham. 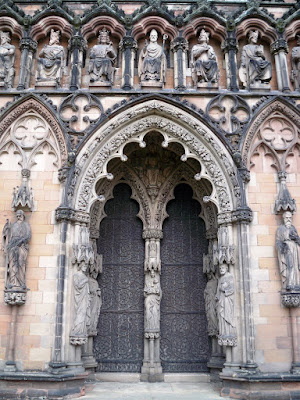 But it is interesting that it was only after this second visit to Lichfield that Pugin arrived for the first time at Alton Towers, the home of the Earl and Countess of Shrewsbury, on 31 August 1837, staying there for the next four days.

The visit changed Pugin’s career for ever, and transformed the ecclesiastical landscape of both Staffordshire and Co Wexford. Lord Shrewsbury’s influence led to Pugin rebuilding Alton Towers and designing great works of architecture including Saint Giles’s, Cheadle, and Saint Mary’s, Uttoxeter. The patronage of Lady Shrewsbury’s uncle brought Pugin to Wexford the following year. 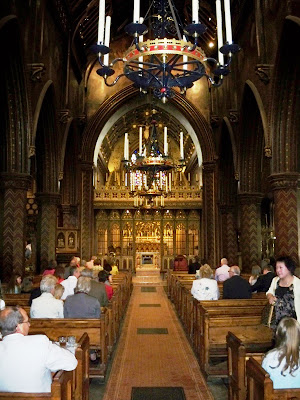 As I sat in the choir stalls of Lichfield Cathedral at Choral Evensong this evening, I realised that had Pugin lived long enough to return to Lichfield, he would have appreciated the results of the restoration work carried out from 1857 onwards by George Gilbert Scott (1811-1878). Indeed, he would have been delighted to see the undoing of Wyatt’s misdeeds, the restoration of the Lady Chapel, the High Altar replaced and correctly furnished, the stonework and statuary of the cathedral restored in true Gothic style,” and the Minton tiles in the choir, designed according to the principles he had once laid down.

Posted by Patrick Comerford at 19:40