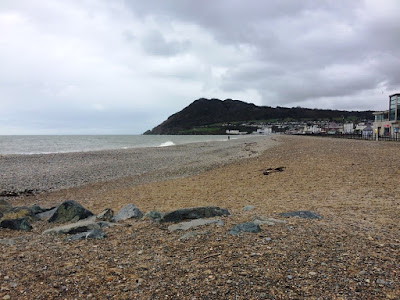 A walk on the beach in Bray this afternoon (Photograph: Patrick Comerford, 2016)

I found a little gap this afternoon between the end of a long working week and the beginning of a busy working weekend. There is an old hackneyed cliché that describes a gap such as this as a “window of opportunity,” and so two of us took the opportunity this afternoon to go for a walk on the beach in Bray and to have a late lunch in Carpe Diem on Albert Avenue in Bray.

On the way into Bray on the north side of the town, I have wondered about the castle that must have given its name to Castle Street. There is a castellated row of shops in Castle Street. This hardly looks like the site of a mediaeval castle, yet it is obvious that a castle must have stood near this site, and its memory is perpetuated in the names of the Castle Garage and Castle Furniture.

A castellated row of modern shops in Bray .... could this be the site of a mediaeval castle? (Photograph: Patrick Comerford, 2016)

Bray has a history that dates back, perhaps, to Roman times. In 1835, while work was being carried out on Esplanade Terrace at the Seafront, a number of skeletons were discovered by George Putland of Bray Head, who also owned extensive properties in Co Cork. Putland later gave his name to Putland Road, where my parents lived immediately after they married.

These remains were placed side by side with small flag stones acting as partitions. But once they were exposed to air, it is said, the bones supposedly crumbled to dust. But several coins were found placed on or beside the breast of one of these skeletons indicated their Roman origins.

Some of the coins bore the image of the Roman emperors Trajan and Hadrian. Trajan ruled from AD 97 to 117, and Hadrian ruled from 117 to 138. So these coins give an indication of when these people were buried. They may have been a shipwrecked Roman crew. Perhaps they were Roman traders. Dalkey island, which has produced Many Roman finds, including coins, glass fragments and pottery, have been found on nearby Dalkey Island, which could have been a Roman emporium or trading site. Perhaps Bray was another centre of Roman trade.

The street sign for Castle Street ... but there is no sign of a mediaeval castle (Photograph: Patrick Comerford, 2016)

An early settlement probably grew up around the ford on the River Dartry, near the Church of Derdach, later the site of Saint Paul’s Church. However, there is no definitive evidence that there was a village in Bray before the Anglo-Normans arrived.

The first Anglo-Norman settlement in Bray was led by Walter de Riddlesford. In 1173, he built a castle in Bray. This castle, which is no longer standing, was built on a rocky promontory at the rear of a house named ‘Clonmore’ on the Herbert Road. Walter de Riddlesford was granted lands in this area by Richard de Clare, better known as ‘Strongbow,’ after the Battle of the Strand where he fought valiantly. He built his castle on this site on a promontory overlooking the River Dargle. An irregular curve in a boundary wall on Church Terrace might be the only remnant of the site.

The original castle would have been a standard motte and bailey, consisting of a wooden rectangular keep, surrounded by a moat. It was rebuilt later as a stone castle, and a new village grew up around its walls, including a church and a mill. The first bridge crossing the River Dartry near this site was built in 1666 and the present bridge was built in 1856.

I understand the site of this castle can be seen on Church Terrace, to the west of Saint Paul’s Church and Churchyard.However, this was not the castle that gave its name to Castle Street on the north side of the River Dartry.

This afternoon I learned that, in all, four castles were built in the Bray area. The other three were: 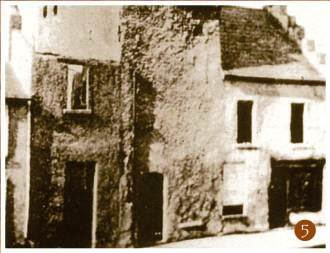 If I want to find the ruins of a castle in Bray, I must start looking beyond Castle Street. 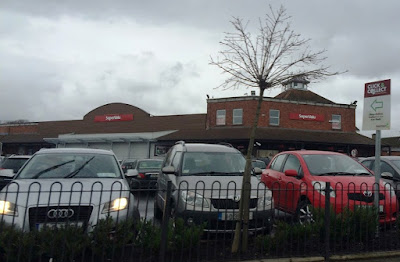 Posted by Patrick Comerford at 21:05