A taste of ‘South Bank Religion’, of
love, and of mission in Southwark 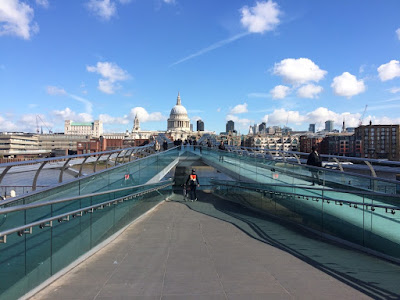 While Mervyn Stockwood (1913-1995) was Bishop of Southwark (1959-1980), the term ‘South Bank Religion’ came into vogue in the 1960s and was associated with the Bishop and the Diocese and those in his theological circle.

Mervyn Stockwood was known for making unusual, radical, but successful appointments, including John Robinson, David Sheppard and Michael Marshall as his suffragan Bishops of Woolwich, Hugh Montefiore and Keith Sutton as Bishops of Kingston.

Bishop Stockwood memorably appeared with Malcolm Muggeridge on the BBC’s Friday Night, Saturday Morning in 1979, arguing that the film Monty Python’s Life of Brian was blasphemous and telling John Cleese and Michael Palin they would “get [their] thirty pieces of silver.”

Bishop Stockwood was born in Wales, which I am about to visit this weekend. He became an Anglo-Catholic at All Saints’ Church, Clifton, and studied theology at Christ’s College, Cambridge, and Westcott House, where he became a socialist. As the Vicar of Great Saint Mary’s, Cambridge, his sermons drew large numbers of undergraduates and earned him a national reputation.

The term ‘South Bank Religion’ was particularly associated with John Robinson’s Honest to God and Layman’s Church, a collection of essays introduced by Timothy (later Lord) Beaumont, and including essays from several of the figures associated with ‘South Bank Religion’, including John Robinson. Its cover features Epstein’s ‘Christ in Majesty’, made for Llandaff Cathedral in 1954-1955 by Jacob Epstein, who also sculpted ‘Saint Michael and the Devil’ (1956-1958) for the exterior of Coventry Cathedral.

I had a taste of another brand of ‘South Bank Religion’ yesterday (28 April 2016) when I took part in a day-long meeting of the Trustees of the Anglican mission agency Us (USPG) in the offices in Southwark.

The offices in Great Suffolk Street are just a short walk from the Tate Modern and the Globe Theatre on the South Bank. Having caught a flight to Stansted from Dublin, it was just a short walk from Liverpool Street station to Saint Paul’s Cathedral, and there I crossed Thames over the Millennium Bridge that links the City of London with South Bank and Southwark.

I was then invited to introduce a reading about the life of Peter Chanel (1803-1841), a 19th century French missionary and martyr in the South Pacific, who was clubbed to death on 28 April 1841.

One of his catechumens said of him: “He loves us; he does what he teaches; he forgives his enemies. His teaching is good.” 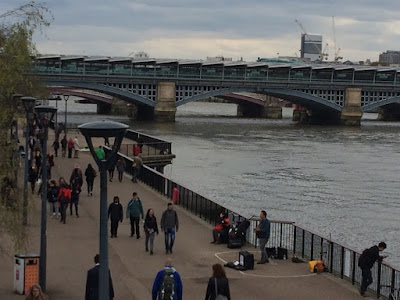 Buskers in the sunshine on South Bank (Photograph: Patrick Comerford, 2016)