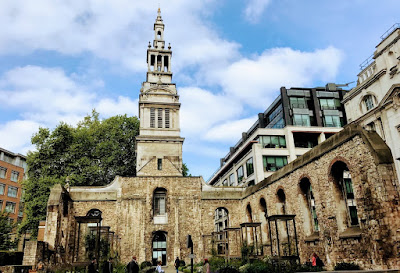 The tower and some walls remain on the site of Christ Church Greyfriars, near Saint Paul’s Cathedral, London (Photograph: Patrick Comerford, 2017)

During my strolls through London on Wednesday [11 May 2017], to and from Liverpool Street Station and the USPG offices in Southwark, one of the former Wren churches I visited was Christ Church Greyfriars, within walking distance of Saint Paul’s Cathedral. 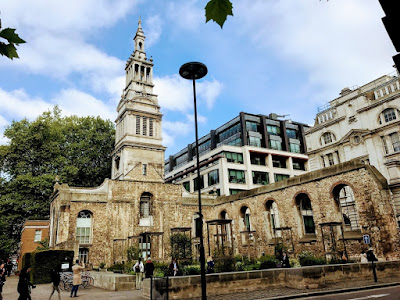 The Monastery of Christ Church Greyfriars was dissolved at the Reformation in 1538 (Photograph: Patrick Comerford, 2017)

The monastery was dissolved in 1538 at the Reformation. The building and fittings suffered heavy damage in this period, when tombs disappeared and were sold for their marble and other monuments were defaced.

The mediaeval church was destroyed in the Great Fire of London in 1666. Sir Christopher Wren, who was commissioned to rebuild the church, oversaw the programme to rebuild Saint Paul’s Cathedral and about 50 parish churches destroyed or damaged in the fire.

The parish was united with Saint Leonard, Foster Lane, which was not rebuilt. The parishioners raised £1,000 to begin work. To save time and money, the foundations of the gothic church were partially reused. The new church and tower, without steeple, were completed in 1687, at a total cost of over £11,778.

The new church was smaller than the gothic structure, and measured 35 metres (114 ft) by 25 metres (81 ft), occupying only the eastern end of the site of the mediaeval church, while the west part became the churchyard.

The tower, rising from the west end of the church, had a simple round-arched main entranceway and, above, windows decorated with neo-classical pediments.

Large carved pineapples, symbols of welcome, graced the four roof corners of the main church building. The east and west walls had buttresses that were unique for a Wren church.

Inside, the church was divided into a nave and aisles by Corinthian columns, raised on tall plinths so that their bases were level with the gallery floors. The aisles had flat ceilings, while the nave had a shallow cross-vault. 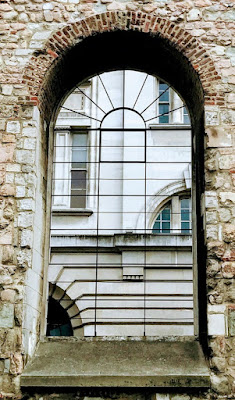 The north and south walls had large round-arched windows of clear glass, which allowed for a brightly lit interior (Photograph: Patrick Comerford, 2017)

The north and south walls had large round-arched windows of clear glass, which allowed for a brightly lit interior.

The east end had three-light windows, a large wooden altar screen and a carved hexagonal pulpit, reached by stairs. There was elaborate carved wainscoting. A pavement of reddish brown and grey marble to the west of the altar rails was said to date from the original gothic church.

The pews were said to have been made from the timbers of a wrecked Spanish galleon. The galleries over the north and south aisles were erected as seating for the schoolchildren from Christ’s Hospital or the ‘Bluecoat School,’ who included Samuel Coleridge and Charles Lamb. The steeple, which was 49 metres (160 feet) tall, was finished in 1704 at an extra cost of more than £1,963. According to the architectural historian Sir Nikolaus Pevsner, the steeple is one of Wren’s finest, ‘a square version of St Mary le Bow.’ It is square in plan with three diminishing storeys. The louvred belfry section gives way to a central staged encircled by an open free-standing Ionic colonnade topped by 12 urns, and above them a delicate square spire capped with a vase.

In 1760, a vestry house was built against the south side of the façade and part of the south wall.

Christ’s Hospital moved out of London to Horsham in West Sussex in 1902, reducing the Sunday attendances considerably, and the school building was sold to the GPO. In the years that followed, numbers continued to decline, and by April 1937, the figures had dropped to 77. The parish of the former Christ Church Greyfriars was merged with nearby Saint Sepulchre-without-Newgate in 1954 (Photograph: Patrick Comerford, 2017)

In 2002, the US investment bank Merrill Lynch completed a regional headquarters complex on land to the north and west. Along with this project, the site of Christ Church underwent a major renovation and archaeological examination, King Edward Street was returned to its former course, and the site of the church has regained its pre-war footprint.

The tower once served as commercial space, but it was converted into a private residence in 2006. 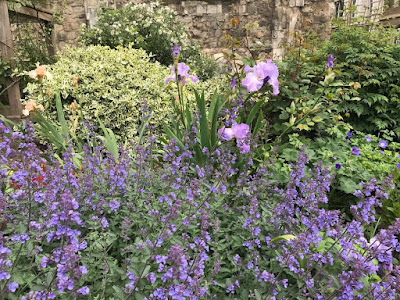 The flowers and plants in the garden represent the former congregation of Christ Church Greyfriars (Photograph: Patrick Comerford, 2017)

Next: Saint Andrew by the Wardrobe.