During my strolls through London earlier this week [11 May 2017], between Liverpool Street Station and the USPG offices in Southwark, one of the former Wren churches I visited was Saint Andrew-by-the-Wardrobe on Queen Victoria Street, two blocks south of Saint Paul’s Cathedral and close to Blackfriars station.

Saint Andrew-by-the-Wardrobe is the last of Wren’s city churches. It was first mentioned around 1170, so it must have been founded considerably earlier. In the 13th century, the church was a part of Baynard’s Castle, an ancient royal residence.

The advowson of Saint Andrew’s was anciently held by the FitzWalter family, probably because Robert Fitzwalter, who died in 1235, was the Constable of Baynard’s Castle.

In 1417, the advowson was held by Thomas de Berkeley, Lord Berkeley. His family townhouse, Berkeley’s Inn, stood nearby at the south end of Adle Street.

If music and sweet poetry agree,
As they must needs, the sister and the brother …
Dowland to thee is dear, whose heavenly touch
Upon the lute doth ravish human sense…

Both the church and the former royal wardrobe were destroyed in the Great Fire of London in 1666, and, the location of the king’s store room is now only remembered in Wardrobe Place.

After the Great Fire, Sir Christopher Wren restored 51 churches in the city. Saint Andrew-by-the-Wardrobe, which is among the simplest of his designs, was rebuilt in 1695.

The details, including the 17th century emblems on the ceiling, have been reproduced with particular care, so that it is difficult to tell that the church was out of use until 1961. 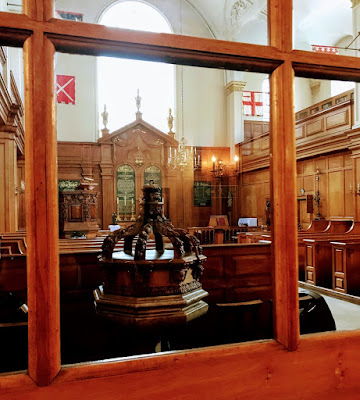 The pulpit in Saint Andrew’s came from Saint Matthew’s, Friday Street, and the font and cover from All Hallows’ Church, Bread Street (Photograph: Patrick Comerford, 2017)

Inside, the church is aisled, with arcaded bays supported by piers rather than columns. The original interior fittings were mostly destroyed during World War II, and many of the church’s features came from other lost London churches.

A figure of Saint Andrew, dated around 1600, stands on the north side of the sanctuary. An unusual statue of Saint Anne, holding the Virgin Mary, who in turn holds the Christ Child, is probably north Italian and dates from around 1500.

The Revd Guy Treweek was priest-in-charge in 2011-2015. His wife, Rachel Treweek, is the first woman to become a diocesan bishop in the Church of England.

The present priest-in-charge, the Ven Luke Miller, is the Archdeacon of London, and a former Archdeacon of Hampstead. Archdeacon Miller studied history at Sidney Sussex College, Cambridge, and theology at Saint Stephen’s House, Oxford. He is a member of the Society of the Holy Cross. His wife, the Revd Jacqueline Ann Miller, is a teacher and a deacon.

For many years Oswald Clark, a former Chairman of the House of Laity of the General Synod in the Church of England, was parish clerk and a churchwarden here. He died recently in his 100th year. 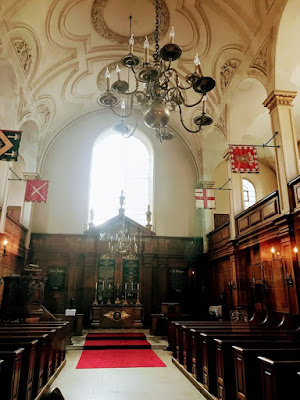 A number of City Livery Companies have links with Saint Andrew by the Wardrobe and some of their banners are in the church (Photograph: Patrick Comerford, 2017)

There is a weekly celebration of the Eucharist in Saint Andrew by the Wardrobe at 12.30 pm on Thursdays. The Saint Gregorios congregation of the Indian Orthodox Church also holds regular Sunday services here. The English Chamber Choir regularly rehearses at the church and sings at special services.