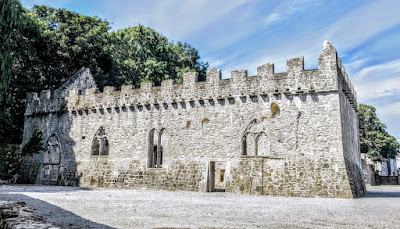 The Great Hall in Newcastle West was a cinema when it was destroyed in a fire in the 1960s (Photograph: Patrick Comerford, 2017)

I was in Newcastle West for much of today [24 July 2017] on pastoral visits. Saint Thomas’s Church, the Church of Ireland parish church, was built in the centre of the town, in front of the castle and facing the Square, was built in 1777, at the sole expense of William Courtenay (1742-1788), 2nd Viscount Courtenay and de jure 8th Earl of Devon.

The church was demolished in 1962 – church attendance figures had declined dramatically, the church had fallen into disrepair, and local people say the then Bishop of Limerick, Robert Wyse Jackson, preferred to see the church demolished than have it turned into a bingo hall or cinema.

Perhaps the bishop’s fears may have been justified. The Nash family, who bought the Castle from the Curling family in the early 20th century, including the Great Hall, which had been a chapel from the 13th century until it was turned a banqueting hall by the Desmond FitzGeralds in the mid-14th century. The Nash family turned the Great Hall into a cinema, but this was burned down in a fire in 1960s.

I had a personal tour of the castle enclosure, including the Great Hall, the Banqueting Hall and the Tower, this afternoon. Although the castle is now a tourist attraction and the church is no longer standing, Newcastle West remains one of the most important towns in West Limerick, and an important town within the boundaries of my parishes. 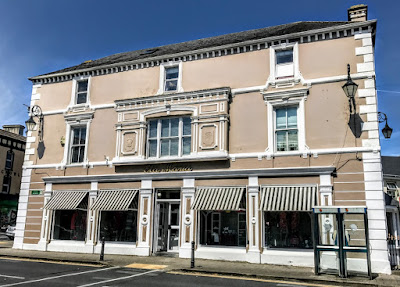 Ela Maria on The Square in Newcastle West was built as a military barracks in the 1840s (Photograph: Patrick Comerford, 2017)

Immediately opposite the castle compound and the site of the former parish church, Ela Maria on The Square is one of the most prominent buildings in the centre of Newcastle West.

This former military barracks is a substantial building, decorated with numerous classically inspired motifs that are a central feature of the building’s façade and that give it an element of grandeur.

This building on a prominent corner site is a three-bay, three-storey U-plan building, and was built as a military barracks ca 1840.

The expansive shopfront, with its corner and panelled pilasters, architraves, cornices, moulded stringcourses, raised keystones, and elliptical-headed door opening, complements the building and is as testament to the work of local craftsmen in the 19th century. There is a central oriel window on the first floor at the front and a later bowed bay window to the side or east elevation facing onto Bishop Street. 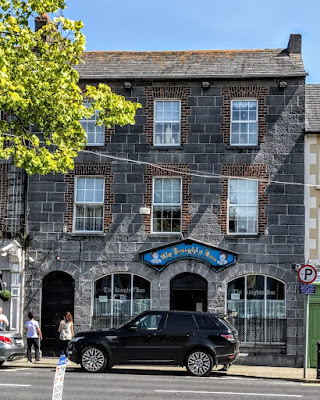 The Knights Inn on The Square is part of a terrace of former townhouses (Photograph: Patrick Comerford, 2017)

The Knights Inn on The Square is typical of the attractive former townhouses that form of a long terrace of commercial and residential buildings.

These terraced three-bay, three-storey townhouses were built by the Courtenay or Devon estate ca 1830. 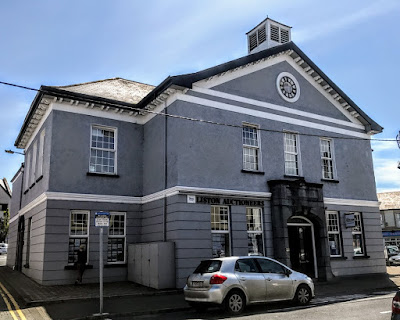 Nearby, the former Carnegie Library on Market Place, Bishop Street, is now the offices of Liston Auctioneers. Contrasting styles of rendering accentuate the height of the building and enliven its façade.

The library, which opened on 13 November 1916, was designed by the architect Richard Caulfeild Orpen (1863-1938), a grandson of Charles Caulfeild, Bishop of Nassau, and an older brother of the painter William Orpen (1878-1931).

The library was financed by donations from the Scottish-American philanthropist Andrew Carnegie. This is a detached, five-bay two-storey building, with a central gable-fronted three-bay projecting bay and a tooled limestone porch to the front. The library was burnt in 1920 but was rebuilt in 1922. 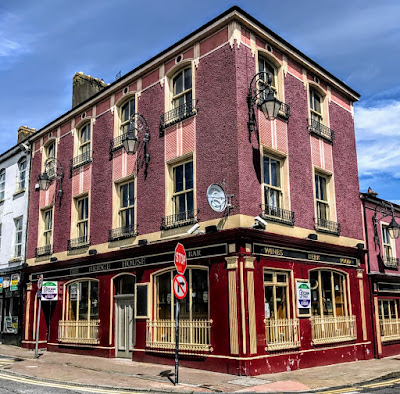 From the castle and The Square, it is a short walk down Bridge Street to the Bridge House on the corner of Bridge Street and North Quay.

This stucco work was influenced by the Classical Revival, and displays stylised triglyph motifs and plat-bands, which have been merged with contemporary geometric fish-scale panels to form an impressive and striking façade. The contrasting styles of the windows add further variety, drawing more attention to this fine building.

The render shopfront of the Bridge House has fluted pilasters with Corinthian capitals surmounted by arabesque panelled brackets, a moulded architrave, a frieze with raised lettering and a cornice. 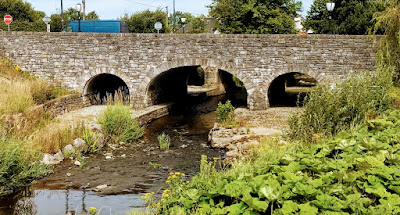 The Bridge of Tears at the junction of the Dromcolliher Road (Photograph: Patrick Comerford, 2017)

This pair of three-arched stone bridges takes its name from being the last farewell point during the Great Famine in the 1840s. It is said emigrants from all parts of West Limerick said their last farewells at the Bridge of Sorrows or Tears before walking or taking a carriage to Cork and the boat to North America. 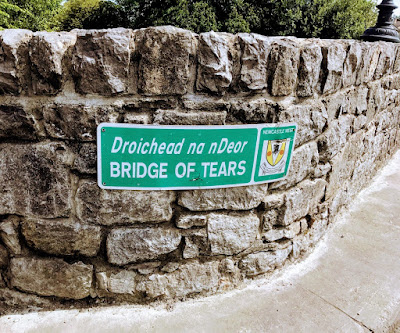 The Bridge of Tears takes its name from the farewells of Famine emigrants (Photograph: Patrick Comerford, 2017)

Posted by Patrick Comerford at 19:06