Following the Stations
of the Cross in Lent 7:
Longford 5: Simon of Cyrene
helps Jesus carry the Cross 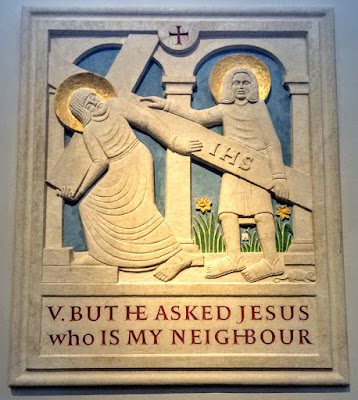 The inscription in terracotta capital letters below the panel reads: ‘But he asked Jesus who is my neighbour’ (see Luke 10: 29).

The full verse in Saint Luke’s Gospel reads: But wanting to justify himself, he asked Jesus, ‘And who is my neighbour?’ The question is put by a lawyer who ‘stood up to test Jesus’ (verse 25). The answer Jesus provides is the Parable of the Good Samaritan (Luke 30-37).

The neighbour is ‘the one who showed him mercy’ (verse 37).

Simon the Cyrene is neither a lawyer nor a Samaritan, but shows himself to be a neighbour to the man who is beaten up on his journey in Jerusalem.

Cyrene was a Greek settlement in the province of Cyrenaica in east Libya in north Africa. it had a Jewish community where 100,000 Judean Jews had been forced to settle during the reign of Ptolemy Soter (323-285 BC) and later it was an early centre of Christianity. The Cyrenian Jews had a synagogue in Jerusalem, where many went for annual feasts.

Cyrene was supposedly the destination of many Sicari or rebels who fled the Roman legions at the time of the Jewish Revolt.

Some commentators suggest Simon was chosen because he may have shown sympathy for Jesus. Others point out that the text says nothing, that Simon had no choice, and that there is no basis to consider carrying the cross an act of sympathetic generosity.

In this station, Simon has a golden halo used by Ken Thompson to indicate saints. Saint Mark identifies Simon as ‘the father of Alexander and Rufus’ (Mark 15: 21). Tradition says they became missionaries, and identifies Rufus with the Rufus named by Saint Paul (see Romans 16: 13). Some traditions also link Simon with the ‘men of Cyrene’ who preached the Gospel to the Greeks (see Acts 11: 20).

Simon is depicted holding the cross with two hands, balancing the weight of the cross which has been crushing Christ’s shoulders and back as he begins to climb some steps. The cross is inscribed with the acronym or Christogram IHS. In Latin, IHS means Jesus Hominum Salvator, Jesus, Saviour of Humanity, although it is also interpreted as In Hoc Signo, ‘In this sign you will conquer.’ In Greek, ΙΗΣ or IHC denotes the first three letters of the Greek name of Jesus, Ιησούς; the normal equivalent Christogram in Greek is the four-letter abbreviation, ΙϹ ΧϹ, representing the first and last letters of each word in the name Ιησούς Χριστός.

There is a contrast between Simon who is free to wear sandals on his feet, and Christ whose feet are bare. In this station, there are signs of spring and of hope in the two daffodils that are blooming on either side of Simon.

The Cyrenian and Simon movements in Britain and Ireland take their names from Simon of Cyrene. The guiding principle is ‘sharing the burden’ in providing services to homeless and disadvantaged groups in society.