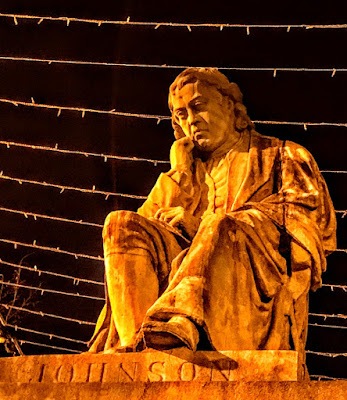 Samuel Johnson (1709-1784), the Lichfield-born lexicographer and writer, is still known as the compiler of the first authoritative English-language dictionary. Yet the accidental discovery of papers of his biographer, James Boswell (1740-1795), in an Irish castle gives us many insights into his life and his literary circle.

Two well-known statues of Johnson and Boswell are the gifts and works of the Dundalk-born artist and writer Percy Hetherington Fitzgerald (1834-1925): the statue of Johnson at Saint Clement Dane’s Church in The Strand, London (1910), and an earlier statue of Boswell (1908) in the Market Place, Lichfield. 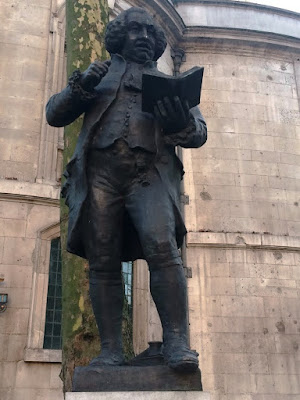 In his inscription on the Lichfield statue, Fitzgerald describes himself as the ‘Biographer of Boswell and editor of Boswell’s Johnson.’

However, the literary theorist Terry Eagleton has described Johnson as being ‘virulently anti-Gaelic.’ So, during on a recent visit to Lichfield, I found myself taking another look at Dr Johnson’s Irish connections and the Irish figures in his circle of friends.

A doctorate from TCD 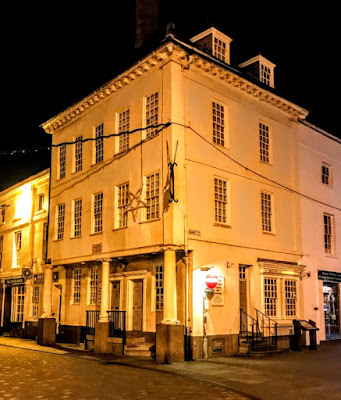 Samuel Johnson had a wide circle of Irish friends in London, had positive opinions about Irish writers and Irish literature, and is known forever as Doctor Johnson because of the honorary degree he received from Trinity College Dublin.

At an early stage, Johnson failed to secure employments as a schoolmaster because he did not have a university degree. When Johnson’s private school at Edial near Lichfield became a financial disaster, he moved to London. There, while he working as a journalist, his skills as a writer were recognised in 1738 with his poem London, which attracted the praise of Alexander Pope. 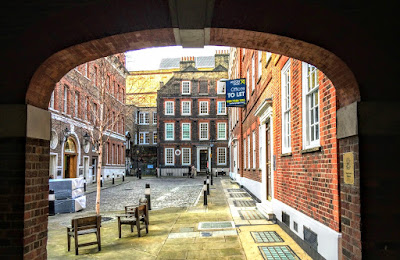 Pope knew Johnson feared being drawn into the hack journalism of ‘Grub Street’ and still hoped to become a grammar school teacher, Pope wrote to the Staffordshire politician, John Leveson-Gower (1694-1754), Earl Gower, asking him to act on Johnson’s behalf.

Gower asked Jonathan Swift (1667-1745), Dean of Saint Patrick’s Cathedral, to intervene so that Johnson might receive an MA from TCD. Either Gower’s pleas fell on deaf ears or Swift refused to act; Johnson never received the degree, never worked again as a teacher, and so continued to work as a journalist and writer. 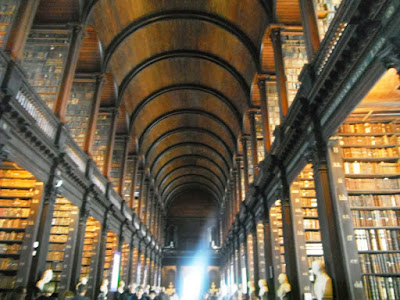 Eventually, with the publication of his Dictionary, TCD bestowed an honorary Doctor of Laws degree on Johnson in 1765, and for ever after he was known as Dr Johnson. 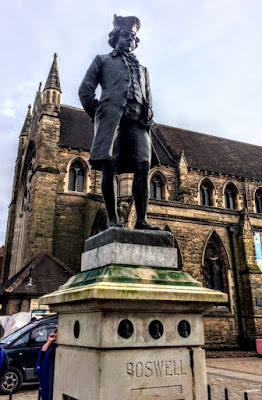 The statue of James Boswell in the Market Square, Lichfield, by the Irish artist Percy Fitzgerald (Photograph: Patrick Comerford)

Boswell recalled that Johnson ‘seemed to me to have an unaccountable prejudice against Swift.’ Richard Brinsley Sheridan’s father, Thomas Sheridan (1721-1788), was Swift’s godson and once worked in the theatre with David Garrick.

Johnson’s Life of Swift reveals that he actually liked the dean. Commenting on Wood’s Halfpence, he says Swift ‘delivered Ireland from plunder and oppression, and shewed that wit, confederated with truth, had such force as authority was unable to resist.’

Johnson evoked Swift’s Gulliver’s Travels in his series of ‘Parliamentary Reports,’ which he disguised as from ‘The Senate of Lilliput.’ The debates were secret at the time and it was illegal to reproduce them in print, making it a true test of Johnson’s ability to write imaginative and satiric works. 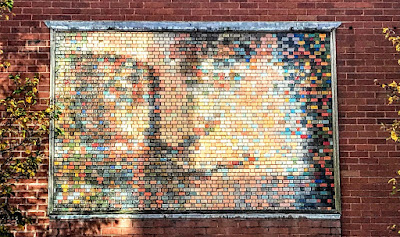 Johnson was a High Church Anglican, and he was strongly influenced by the writings of the Caroline Divine Jeremy Taylor, Bishop of Down, Dromore and Connor.

At times when Johnson ‘was most distressed,’ his biographer, Sir John Hawkins (1719-1789) recommended him to read Rules and Exercises of Holy Living and Dying by Jeremy Taylor and his Ductor Dubitantium.
Johnson regarded Jeremy Taylor as the best of ‘all the divines that have succeeded the fathers.’ He once adapted Taylor’s words for his private preparation for receiving the Sacrament of Holy Communion.

Two Church of Ireland bishops who were part of Johnson’s inner circle were Thomas Percy of Dromore and Thomas Barnard of Killaloe.

Thomas Percy, Bishop of Dromore (1782-1811), was once described by Archbishop Stuart as ‘inactive and useless,’ but he was an important literary figure in his day. He was a member of Johnson’s Literary Club, a friend of Oliver Goldsmith and Sir Joshua Reynolds, and the editor of the Reliques of Ancient English Poetry, which fired the imagination of Walter Scott. 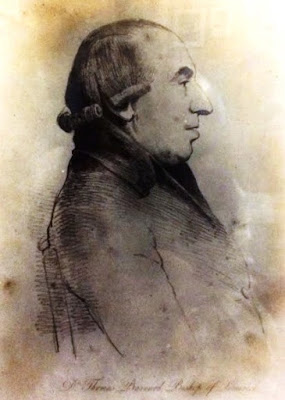 Thomas Barnard (1727-1806) was part of Johnson’s circle of friends in London while he was Bishop of Killaloe (1780–1794). Barnard, who later became Bishop of Limerick, Ardfert and Aghadoe (1794-1806), was a member of the Literary Club, and his friends in London included Boswell, Garrick, Goldsmith, Percy, Reynolds and Edmund Burke.

In 1783, Johnson wrote a charade as a tribute to Barnard, and he once said of him: ‘No man ever paid more attention to another than he has done to me … Always, sir, set a high value on spontaneous kindness. He whose inclination prompts him to cultivate his friendship of his own accord, will love you more than one whom you have been at pains to attach to you.’ 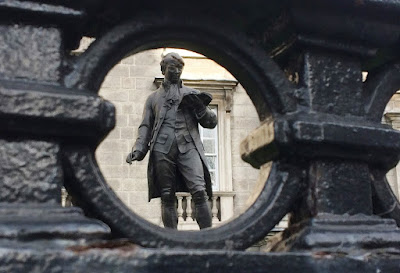 Johnson was particularly high in his praise of Oliver Goldsmith, contributed lines to both The Deserted Village and The Traveller, and he said of Goldsmith’s Traveller: ‘There has not been so fine a poem since Pope’s time.’

Praising She Stoops To Conquer, Johnson said: ‘I know of no comedy for many years that has so much exhilarated an audience, that has answered so much the great end of comedy – making an audience merry.’

In his Latin epitaph for Goldsmith, Johnson wrote:

Oliver Goldsmith: A Poet, Naturalist, and Historian,
Who left scarcely any style of writing untouched,
And touched nothing that he did not adorn;
Of all passions, whether smiles were to be moved or tears,
A powerful yet gentle master;
In genius, sublime, vivid, versatile,
In style, clear, elevated, elegant -
The love of companions,
The fidelity of friends,
And the veneration of readers,
Have by this monument honoured the memory. 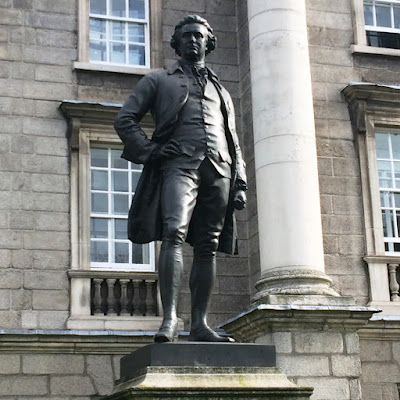 The many Irish politicians among Johnson’s friends included Edmund Burke, and the brothers Thomas Fitzmaurice and William Fitzmaurice, who became Lord Shelburne and later Lord Lansdowne.

Edmund Burke (1729-1797) was born in Dublin and educated at TCD, but he spent most of his political career in England and as an MP in Westminster. Johnson admired Burke for his brilliant mind. 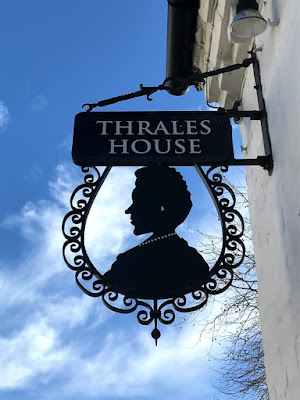 Johnson’s muse, Hester Thrale (Mrs Piozzi), quotes Johnson as once saying of Burke: ‘You could not stand five minutes with that man beneath a shed while it rained, but you must be convinced you had been standing with the greatest man you had ever yet seen.’

But Johnson strongly disagreed with Burke’s politics, which he condemned in his pamphlet The Patriot. Perhaps Johnson had Burke in mind when he made his famous remark about patriotism and scoundrels.

Thomas FitzMaurice (1742-1793) was the second son of John FitzMaurice, Earl of Shelburne. His wife, Lady Mary O’Brien, was a daughter of Murrough O’Brien, 5th Earl of Inchiquin, and in 1790 she inherited the title of Countess of Orkney from her mother.

Thomas FitzMaurice was a friend of Johnson, Garrick and the Thrales, and was MP for Calne and Chipping Wycombe. When he died in 1793, the Gentleman’s Magazine noted: ‘He formerly lived on the most intimate terms with Johnson, Hawkesworth, and Garrick.’

His brother, William Fitzmaurice (1737-1805), became 2nd Earl of Shelburne and a prominent statesman. He was British Prime Minister from 1782 to 1783 and Marquess of Lansdowne. Johnson praised him as ‘a man of abilities and information,’ open to ideas, and said he ‘acted like himself, that is, unlike anybody else.’

‘The last place where I should wish to travel’

Johnson’s circle of Irish friends in London also included Arthur Murphy and Charles O’Conor. However, Boswell, in his Life of Johnson records Johnson as having famously said on one occasion: ‘The Irish are not in a conspiracy to cheat the world by false representations of the merits of their countrymen. No, Sir; the Irish are a fair people; – they never speak well of one another.’ 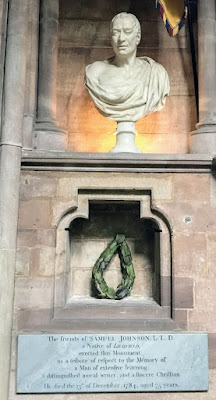 But what did Johnson truly think of Ireland? Boswell recalls Johnson once saying to an Irishman, during a conversation on Ireland’s political state: ‘Do not make a union with us, Sir. We should unite with you, only to rob you. We should have robbed the Scotch, if they had had any thing of which we could have robbed them.’

He also recalls Johnson saying: ‘The Irish are in a most unnatural state ... Did we tell them we have conquered them, it would be above board: to punish them by confiscation and other penalties, as rebels, was monstrous injustice.’

In a letter to the Irish writer and historian Charles O’Conor (1710-1791), Johnson wrote in 1755: ‘I have long wished that the Irish literature were cultivated. Ireland is known by tradition to have been once the seat of piety and learning; and surely it would be very acceptable to all those who are curious either in the original of nations, or the affinities of languages, to be further informed of the revolution of a people so ancient, and once so illustrious.’ 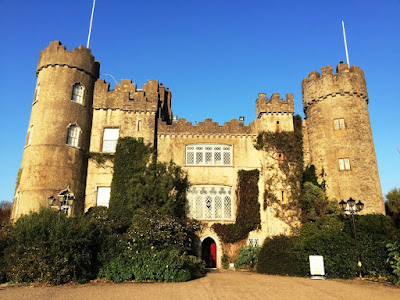 In an accident of history, two collections of the private papers of James Boswell, including intimate journals for much of his life, were discovered in Malahide Castle, Co Dublin, in the 1920s and sold to an American collector Ralph H Isham, by James Boswell Talbot (1874-1948), Lord Talbot of Malahide.

Lord Talbot of Malahide was Boswell’s great-great-grandson. But both sets of papers were not sold until Lady Talbot tried, without success, to censor some of Boswell’s more explicit descriptions of his sexual encounters.

Boswell’s papers are now in Yale University and they provide revealing insights into his life and thoughts of Johnson and his biographer. They include voluminous notes on his Grand Tour of Europe, his tour of Scotland with Johnson, and meetings and conversations with eminent members of The Club, including Garrick, Burke, Goldsmith and Reynolds. 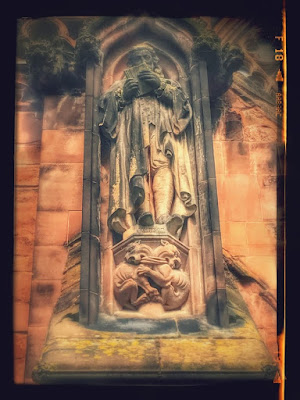 Samuel Johnson’s statue on the exterior of the choir in Lichfield Cathedral (Photograph: Patrick Comerford)

This feature was first published in May 2018 in the Church Review (Dublin and Glendalough) and the Diocesan Magazine (Cashel, Ferns and Ossory) 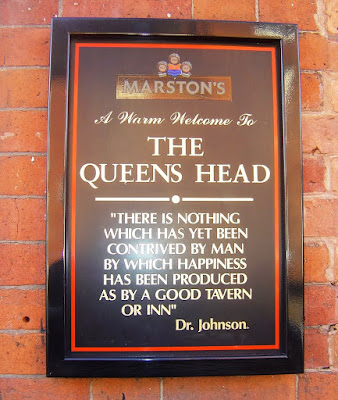